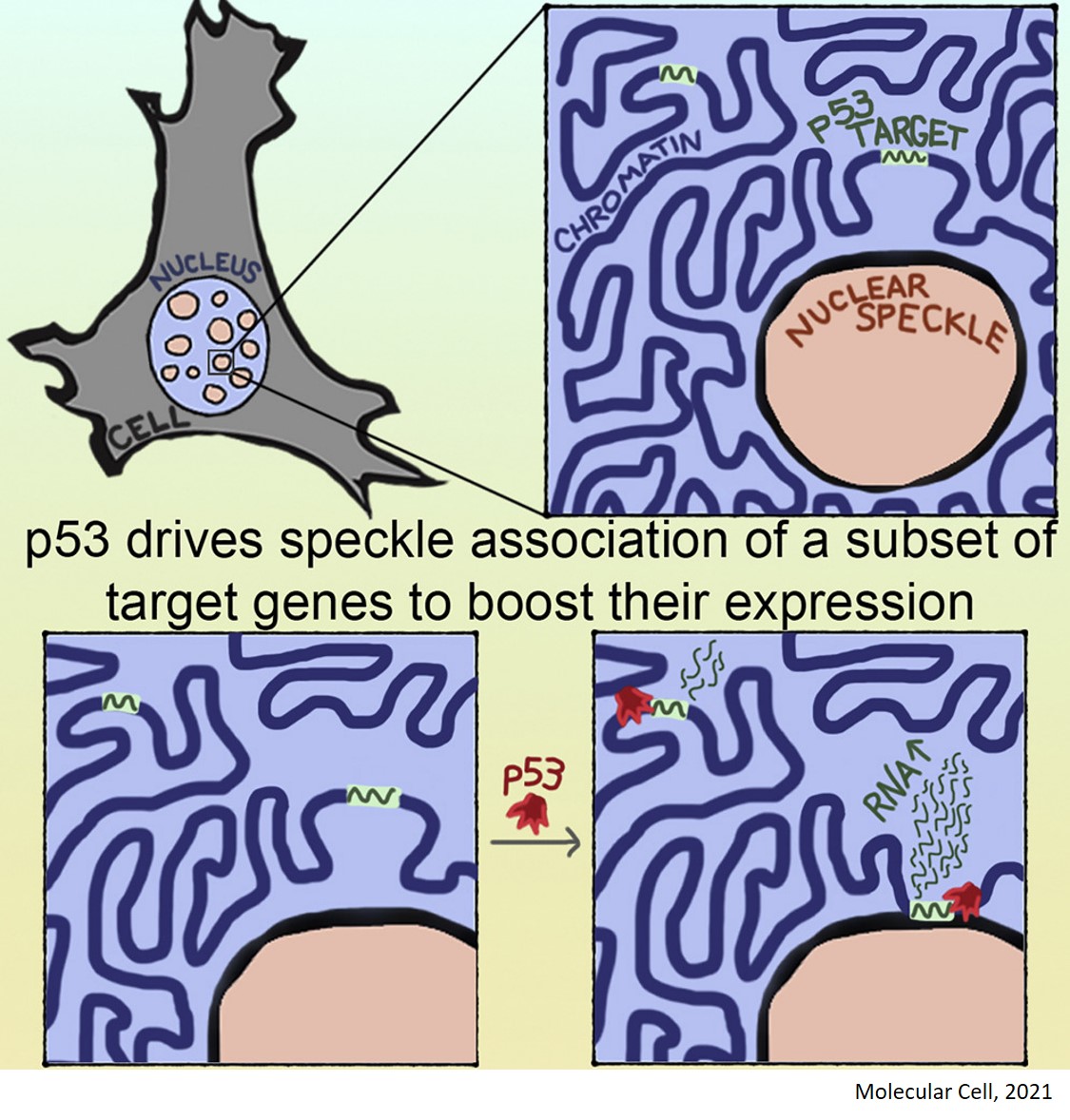 A research team has illuminated the functions of mysterious structures in cells called "nuclear speckles," showing that they can work in partnership with a key protein to enhance the activities of specific sets of genes.

The discovery, which will be published in Molecular Cell, is an advance in basic cell biology; the key protein it identifies as a working partner of speckles is best known as major tumor-suppressor protein, p53. This avenue of research may also lead to a better future understanding of cancers, and possibly better cancer treatments.

"This study shows that nuclear speckles work as major regulators of gene expression, and suggests that they have a role in some cancers," said study senior author.

Nuclear speckles, tiny structures within the nucleus of every mammalian cell, were first observed with a microscope in 1910, but in the ensuing 111 years, scientists have discovered little about their functions.

One early theory was that the speckles are essentially storage depots, since they do contain important molecules needed to copy out the DNA in genes into RNA transcripts and then to process those transcripts into the finished "messenger RNAs" that can be translated into proteins. In recent years, scientists have begun to find evidence that speckles play a more direct role in gene transcription.

Nevertheless, identifying their precise functions and how those are regulated has been difficult, due to the basic challenges of studying speckles.

In the study, the authors overcame some of these challenges to reveal that speckles work with p53 to directly enhance the activity of certain genes.

While p53 has long been known as a "transcription factor" or master switch that controls the activity of a broad set of genes, the researchers showed that it exerts this effect on a subset of its target genes via nuclear speckles. The protein acts as a matchmaker, bringing together speckles and DNA containing these target genes. When the speckles and genes get close, the level of transcription of the genes jumps significantly.

The researchers went even further to show that the p53 target genes whose activity is boosted via speckles have a set of functions that are broadly distinct from those of other p53 target genes.

"Speckle-associated p53 target genes, compared to other p53 target genes, are more likely to be involved in tumor-suppressing functions such as stopping cell growth and triggering cell suicide," the lead author said.

These findings not only confirm nuclear speckles as enhancers of gene activity, but also implicate them in the functions of a key tumor-suppressor protein, which is known to be disrupted in about half of all cancers. In some cancers, p53 is mutated in a way that causes it not only to lose its tumor-suppressor function but also to actively drive cancerous growth. The researchers are now working to determine if nuclear speckles are involved in mediating this cancer-driving effect of mutant p53.

"If that proves to be the case," the senior author said, "then in principle we could develop treatments to interfere with this association between p53 and speckles--an association that might turn out to be a real Achilles heel for cancer."