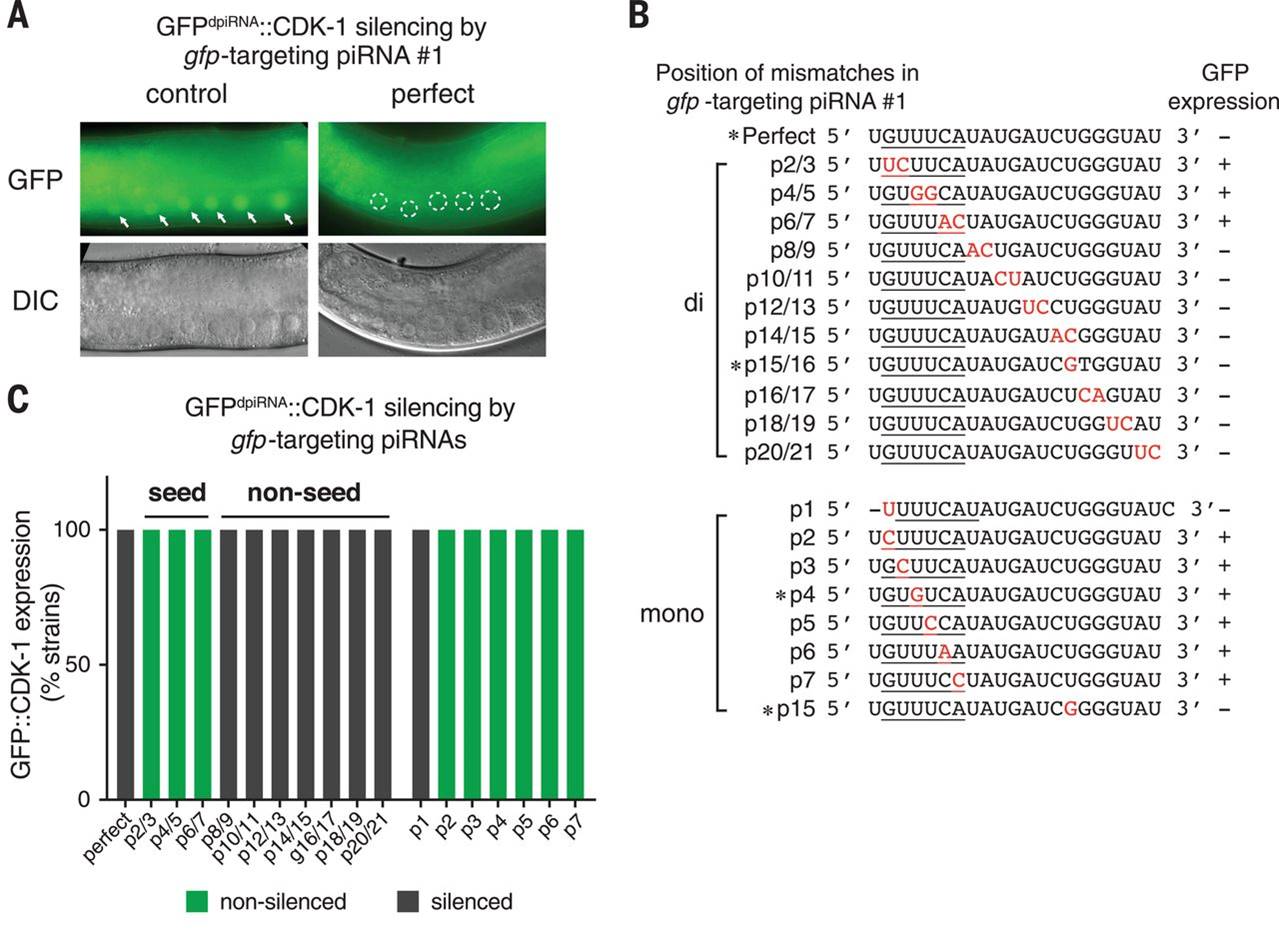 Thousands of short RNA molecules with diverse genetic sequences serve as security guards to identify and silence attempts to invade the genome, such as DNA inserted by viruses or parasitic elements known as transposons.

These diverse, small RNA molecules, known as Piwi-interacting RNAs (piRNAs) are produced by various animals, from insects and worms to mammals like mice and humans. In a new study published in the journal Science, researchers describe how piRNAs find foreign genetic sequences to silence them. They also show how endogenous or "self" genes that properly belong in the genome identify themselves to avoid this additional scrutiny.

"Nearly every animal has these small RNAs, and they use them as a guide to look for target sequences and silence them," said senior author of the new study. "Until now though, it was rather mysterious what their function was, and why there are so many with such diverse genetic sequences."

RNA acts as a messenger to carry out instructions coded in DNA to produce proteins that perform essential functions in the body. In the new study, researchers studied piRNAs produced by cells in the reproductive system of the nematode worm, C. elegans, a classic model organism studied by scientists to understand basic biological processes.

Piwi-interacting RNAs are a type of small RNAs that associate with what's known as Argonaute machinery in cells that search for target RNA and shut it down. RNA is built with the same chains of nucleotides that mirror sequences of DNA, denoted with the same familiar A, C, G, U lettering. Some small RNAs need to match the target sequence exactly to identify them, like a security guard looking for a specific person. Others small RNAs can flag genes with a partial match, more like looking for a suspect based on a general description.

Scientists haven't been sure exactly how piRNAs find their targets, in part because there are so many of them. The nematode that for example, has more than 15,000 piRNAs with different nucleotide sequences. Why are there so many, and what purpose do they serve?

When Piwis recognize their target, they recruit a set of even smaller secondary RNAs corresponding to the sequence at the target site, a way of marking it for attention. Knowing this the research team created a synthetic piRNA with a sequence that didn't exist in the worm and tracked where it created its marker. Then, by examining the different sequences the synthetic piRNA marked, they could work backwards to figure out its logic for finding a match.

It turns out that piRNAs need a fairly close match to a portion of the sequence, but they can tolerate a few mismatches on the rest. It also appears that there are so many unpaired Piwis in the worms because it gives them a toolbox of many possible sequence combinations they might need to identify foreign RNAs and turn them off. Instead of a security guard searching for a specific person, or someone who sort of looks like that person, they have a whole database of possible suspects they can track down if needed.

But how do they avoid false positives, or wrongly identify endogenous "self" genes that belong there? To find out, researchers engineered more piRNAs that could recognize several well-known genes that belong in the nematode genome. But this set of piRNAs didn't silence or affect the function of the endogenous genes at all, meaning they were somehow resistant.

The researchers also found that many endogenous genes had additional repeating sections of A and T nucleotides that mark them as "self" and not foreign. This licensing signal serves as a credential to identify the gene, a passport to show the piRNA system it belongs.

The study sheds light on a basic mechanism that can affect fertility in animals. Previous research has shown that if Piwi genes develop mutations, the piRNA system can malfunction. Then, if viruses or transposons inject foreign DNA elements into the germ line, or reproductive cells that produce eggs and sperm, piRNAs aren't there to detect and silence them. These undetected changes can lead to infertility and other issues in the reproductive system.

The study also solves a technical issue that has stymied C. elegans scientists for decades. When researchers want to study a specific gene, they often make slight modifications so a special protein tag that produces fluorescent light can attach to the proteins produced by their gene of interest. This works well in most types of cells, but in the germ line, the piRNA system spots those genetic changes and shuts off production of the fluorescent tag.

The team showed how scientists can prevent this from happening. By editing the sites recognized by piRNAs just enough, they can't find them anymore, but the genes will still function the same way. Researchers could also insert the same self-licensing signals into non-coding sections of DNA, to make the changes appear to belong to endogenous genes. These techniques will also allow scientists to use the CRISPR-Cas9 gene editing system to track changes in germ line.