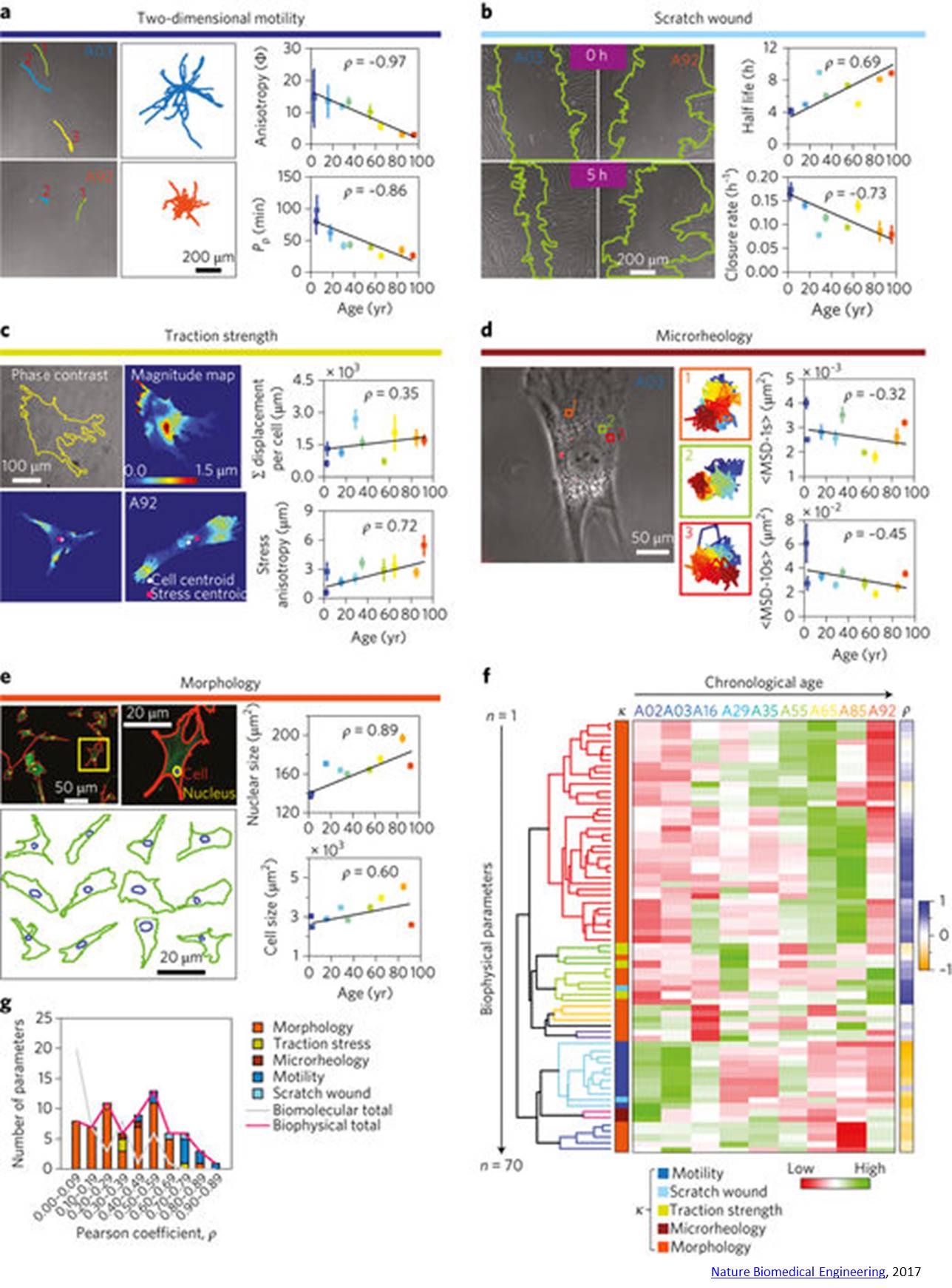 Sure, you know how old you are, but what about your cells? Are they the same age? Are they older, younger? Why does it matter?

A team of researchers is reporting progress in developing a method to accurately determine the functional age of cells, a step that could eventually help clinicians evaluate and recommend ways to delay some health effects of aging and potentially improve other treatments, including skin graft matching and predicting prospects for wound healing.

In the journal Nature Biomedical Engineering, lead author reports success in creating a system that considers a wide array of cellular and molecular factors in one comprehensive aging study.

These results show that the biophysical qualities of cells, such as cell movements and structural features, make better measures of functional age than other factors, including cell secretions and cell energy.

The multidisciplinary team of engineers and clinicians examined dermal cells from just underneath the surface of the skin taken from both males and females between the ages of 2 to 96.

The researchers hoped to devise a system that through computational analysis could take the measure of various factors of cellular and molecular functions. From that information, they hoped to determine the biological age of individuals more accurately using their cells, in contrast to previous studies, which makes use of gross physiology, or examining cellular mechanisms such as DNA methylation.

"We combined some classic biomolecular hallmarks of aging, and sought to further elucidate the role of biophysical properties of aging cells, all in one study," said the lead author.

Researchers trying to understand aging have up to now focused on factors such as tissue and organ function and on molecular-level studies of genetics and of epigenetics, meaning heritable traits that are not traced to DNA. The level in between - cells - has received relatively little attention, the researchers wrote.

This research was meant to correct for that omission by considering the biophysical attributes of cells, including such factors as the cells' ability to move, maintain flexibility and structure. This focus emerges from the understanding that changes associated with aging at the physiological level - such as diminished lung capacity, grip strength and mean pressure in the arteries - "tend to be secondary to changes in the cells themselves, thus advocating the value of cell-based technologies to assess biological age," the research team wrote.

For example, older cells are more rigid and do not move as well as younger cells, which, among other consequences, most likely contributes to the slower wound healing commonly seen in older people, said the senior author.

Phillip explained that this better accuracy from the biophysical factors most likely results from the orchestration of many biomolecular factors. He compared it to the more complete picture you get looking at a forest from a distance without binoculars.

"With binoculars you can see details about the individual trees, the color and shapes of the leaves, the roughness of the bark, the type of tree, but without the binoculars you can now see the density of the trees, and whether there is a barren plot, or a group or dying trees," lead author said. "This is something you may miss with the binoculars, unless you are looking at the correct spot."

The more accurate system could eventually enable clinicians to see aging in cells before a patient experiences age-related health decline. This in turn could allow doctors to recommend treatments or changes in life habits, such as exercise or diet changes, senior author said.

The researchers acknowledge that the system needs further testing with a larger cell sample, but the results are robust and encouraging.

"It opens the door to finally be able to track how a person is doing at the cellular level," senior author said. Face recognition system in our brain!