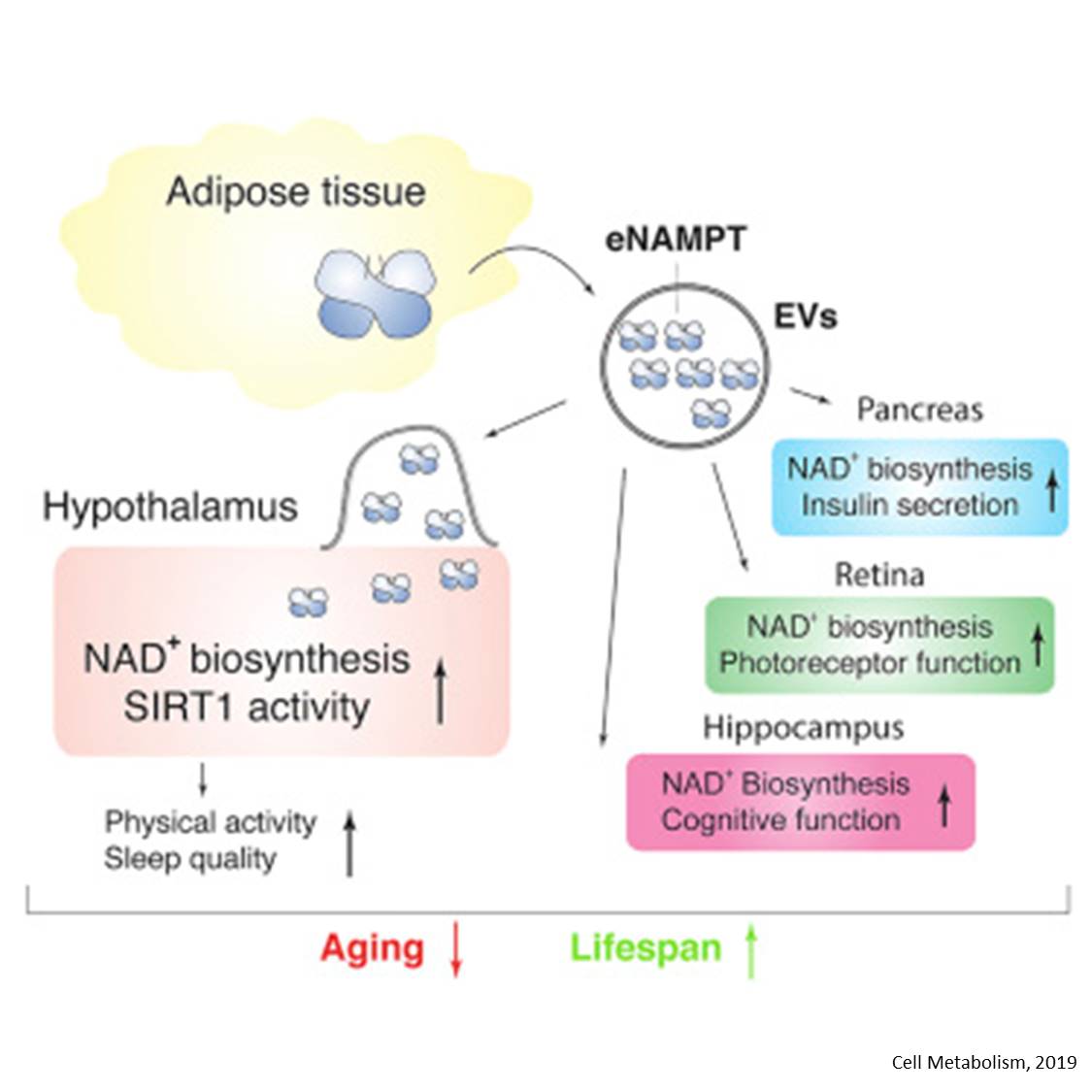 New research has identified a novel approach to staving off the detrimental effects of aging, according to a new study..

The study suggests that a protein that is abundant in the blood of young mice plays a vital role in keeping mice healthy. With age, levels of this protein decline in mice and people, while health problems such as insulin resistance, weight gain, cognitive decline and vision loss increase. Supplementing older mice with the protein obtained from younger mice appears to slow this decline in health and extend the life spans of older mice by about 16 percent. The study is published in the journal Cell Metabolism.

The circulating protein is an enzyme called eNAMPT, which is known to orchestrate a key step in the process cells use to make energy. With age, the body's cells become less and less efficient at producing this fuel -- called NAD -- which is required to keep the body healthy. The researchers have shown that supplementing eNAMPT in older mice with that of younger mice appears to be one route to boosting NAD fuel production and keeping aging at bay.

"We have found a totally new pathway toward healthy aging," said senior. "That we can take eNAMPT from the blood of young mice and give it to older mice and see that the older mice show marked improvements in health -- including increased physical activity and better sleep -- is remarkable."

Unlike other studies focused on transfusing whole blood from young mice to old mice, the group increased levels of a single blood component, eNAMPT, and showed its far-reaching effects, including improved insulin production, sleep quality, function of photoreceptors in the eye, and cognitive function in performance on memory tests, as well as increased running on a wheel. The group also has shown other ways to boost NAD levels in tissues throughout the body. Most notably, the researchers have studied the effects of giving oral doses of a molecule called NMN, the chemical eNAMPT produces. NMN is being tested in human clinical trials.

"We think the body has so many redundant systems to maintain proper NAD levels because it is so important," the senior author said. "Our work and others' suggest it governs how long we live and how healthy we remain as we age. Since we know that NAD inevitably declines with age, whether in worms, fruit flies, mice or people, many researchers are interested in finding anti-aging interventions that might maintain NAD levels as we get older."

The research has shown that the hypothalamus is a major control center for aging throughout the body, and it is directed in large part by eNAMPT, which is released into the blood from fat tissue. The hypothalamus governs vital processes such as body temperature, thirst, sleep, circadian rhythms and hormone levels. The researchers have shown that the hypothalamus manufactures NAD using eNAMPT that makes its way to the brain through the bloodstream after being released from fat tissue. They also showed that this eNAMPT is carried in small particles called extracellular vesicles. As levels of eNAMPT in the blood decline, the hypothalamus loses its ability to function properly, decreasing life span.

In an intriguing finding, the authors showed that levels of eNAMPT in the blood were highly correlated with the number of days the mice lived. More eNAMPT meant a longer life span, and less meant a shorter one.

The researchers also showed increased life span with delivering eNAMPT to normal old mice. All mice that received saline solution as a control had died before day 881, about 2.4 years. Of the mice that received eNAMPT, one is still alive as of this writing, surpassing 1,029 days, or about 2.8 years.

"We could predict, with surprising accuracy, how long mice would live based on their levels of circulating eNAMPT," the senior author said. "We don't know yet if this association is present in people, but it does suggest that eNAMPT levels should be studied further to see if it could be used as a potential biomarker of aging."

The study also found sex differences in levels of eNAMPT, with female mice consistently showing higher levels of the enzyme.

"We were surprised by the dramatic differences between the old mice that received the eNAMPT of young mice and old mice that received saline as a control," the senior author said. "These are old mice with no special genetic modifications, and when supplemented with eNAMPT, their wheel-running behaviors, sleep patterns and physical appearance -- thicker, shinier fur, for example -- resemble that of young mice."