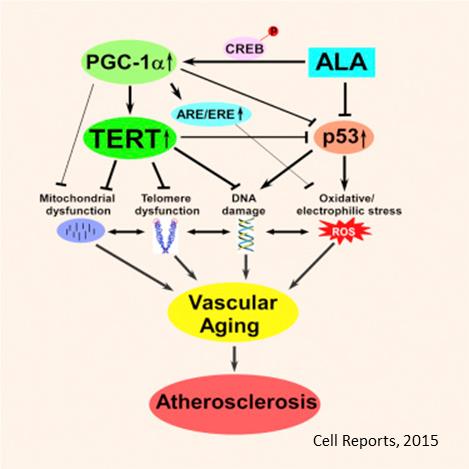 In human cells, shortened telomeres, the protective caps at the ends of chromosomes, are both a sign of aging and contribute to it. Scientists found that the dietary supplement alpha lipoic acid (ALA) can stimulate telomerase, the enzyme that lengthens telomeres, with positive effects in a mouse model of atherosclerosis.

Mice also lacking PGC1-alpha have more advanced plaques in their blood vessels, but only in older animals, the authors show.

Consistent with the poorer state of their blood vessels, aortic cells from PGC1-alpha-disrupted mice had shorter telomeres and reduced telomerase activity. Having shortened telomeres led the smooth muscle cells to display more oxidative stress and damage to the rest of their DNA.

The authors show that introducing PGC1-alpha back into vascular smooth muscle cells lacking that gene with a gene-therapy adenovirus could restore telomerase activity and lengthen the cells’ telomeres.

As a way to boost PGC1-alpha in cells more conveniently, researchers turned to alpha lipoic acid or ALA. ALA is a sulfur-containing fatty acid used to treat diabetic neuropathy in Germany, and has previously been shown to combat atherosclerosis in animal models.

Treating isolated smooth muscle cells with ALA for one day could both stimulate PGC1-alpha and telomerase, the authors found. ALA’s effects on vascular smooth muscle cells could also be seen when it was injected into mice. Scientists say they are now investigating the effects of ALA on other tissues in mice. They have not observed increased cancers in ALA-treated mice, but say more thorough investigation is needed to fully assess cancer risk.