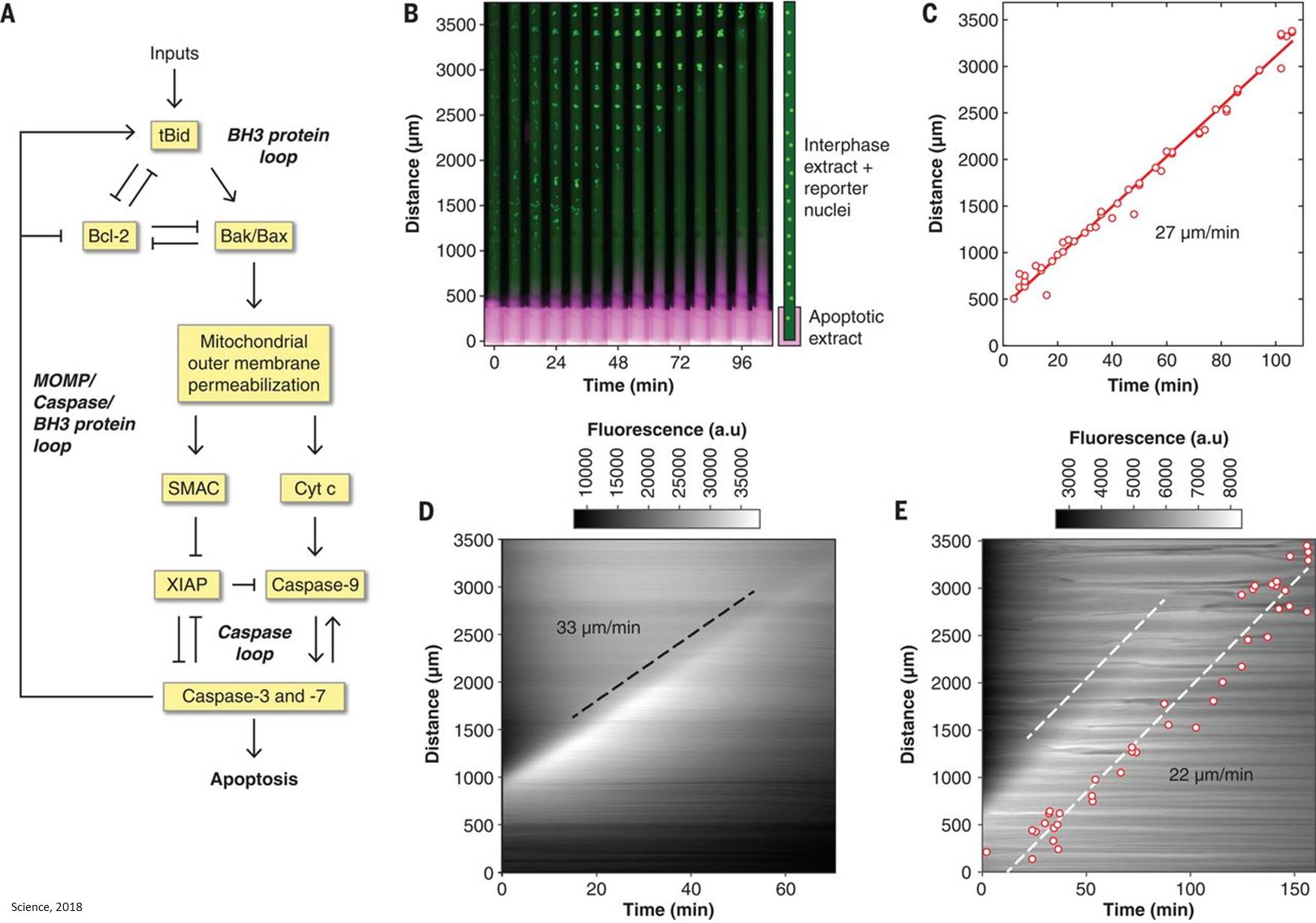 Inside a cell, death often occurs like the wave at a baseball game.

What starts with two hands flung skyward prompts another, and another, until the wave has rippled far and wide across the whole stadium. This kind of a rolling surge, spurred by the activity of one or a few things, is known as a trigger wave. A new study published in Science has found that this phenomenon guides one of the most well-known and widespread forms of cell death: apoptosis.

It's not the first time trigger waves have been identified in the microcosms of life. The cell cycle, a cornerstone of cell biology in which cells divide to make new cells, regulates production via trigger waves, too. So do neuronal action potentials, which allow neurons to pass signals via electrical impulse. And it likely doesn't end there.

"This work is another example of how nature makes use of these trigger waves -- things that most biologists have never heard of -- over and over again," said the senior author. "It is a recurring theme in cell regulation. I bet we'll start to see it in textbooks soon."

One of the better-understood forms of cell death, apoptosis still manages to mystify scientists. "Sometimes our cells die when we really don't want them to -- say, in neurodegenerative diseases. And sometimes our cells don't die when we really do want them to -- say, in cancer," senior author said. "And if we want to intervene, we need to understand how apoptosis is regulated."

Trigger waves require two main elements: a positive feedback loop and a threshold think -- falling dominoes. One domino collapses on another and triggers that domino to topple onto the next. The threshold is the force necessary to completely knock the tile over; a domino just shy of its threshold would teeter and rock back into a vertical position, whereas one that's reached the threshold would fall. Trigger waves in an apoptotic cell are governed by that same phenomenon. Once cell death is initiated, by way of disease or something else, specific killer proteins in the cell, called caspases, activate. These proteins then float to other caspases and activate them; those follow suit until the entire cell has to pack it in.

"It spreads in this fashion and never slows down, never peters out," the senior author said. "It doesn't get any lower in amplitude because every step of the way it's generating its own impetus by converting more inactive molecules to active molecules, until apoptosis has spread to every nook and cranny of the cell."

To see how death takes over a single cell, researchers used Xenopus frog eggs. One egg is a single cell, and as cells go, these are enormous, making them a prime candidate to observe how death spreads from one end of the cell to the other, which can be done with the naked eye.

To start, the scientists took fluid from the egg and inserted it into Teflon tubes, which were several millimeters long, and initiated apoptosis through a molecular "death signal." By using a fluorescent technique linked to the activation of apoptosis, they could watch as the bright green glow moved its way down the tube at a constant speed, indicating that apoptosis was spreading via trigger waves, as opposed to some other more rudimentary mechanism, such as diffusion, which slows down as it moves.

The question was, did apoptosis also spread like that in cells as they naturally occur?

Turning to fluorescence microscopy here proved more difficult, as intact frog eggs are quite opaque. However, researchers noticed that when frog eggs die, a sort of ripple of pigmentation occurs at the egg's surface. The scientists saw that during death, a dark ripple moved like a curved line across the egg at a constant speed from one side to the other. The speed of this surface wave ( ~30 micrometers per minute), which was constant and did not slow down, tipped them off to trigger waves here too. So to further confirm, they analyzed individual dying eggs: Every egg that had undergone this surface wave contained activated caspase, whereas the eggs that had not yet undergone the waves did not --more evidence that trigger waves propagate cell death in an intact cell too.

So far, apoptosis is the only form of cell death in which trigger waves have been identified, but the authors are  investigating other processes in biology to see if the continual waves might play a role.

"We have all this information on proteins and genes in all sorts of organisms, and we're trying to understand what the recurring themes are," the senior author said. "We show that long-range communication can be accomplished by trigger waves, which depend on things like positive feedback loops, thresholds and spatial coupling mechanisms. These ingredients are present all over the place in biological regulation. Now we want to know where else trigger waves are found."