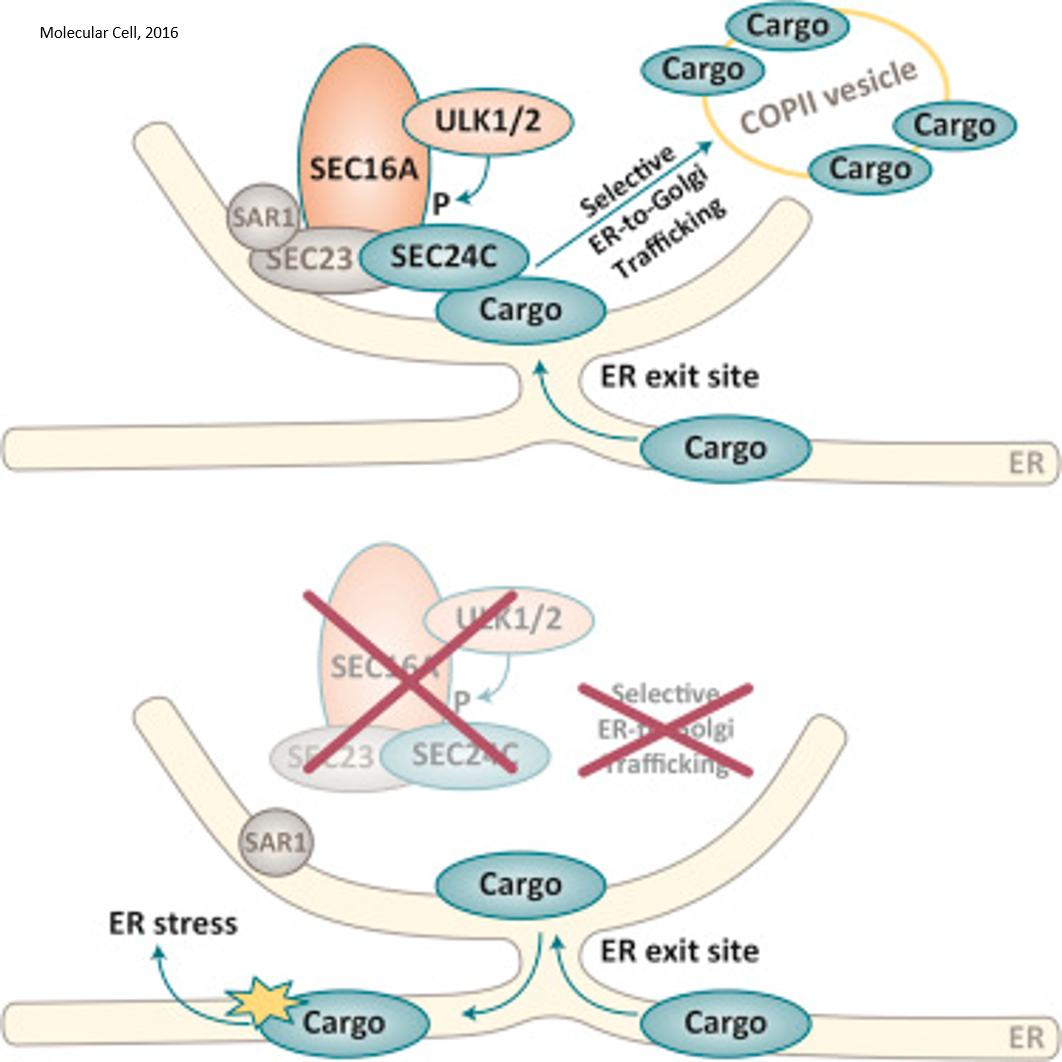 Researchers have uncovered how two enzymes, ULK1 and ULK2, which are best known for their role in the degradation and recycling of proteins, control the trafficking of specific proteins. The control of the movement of these molecules from the endoplasmic reticulum (ER) to the Golgi apparatus is essential for maintaining the correct balance of cellular processes.

The results are described in the journal Molecular Cell and in time may help researchers understand how certain neurodegenerative diseases arise.

"Under typical physiological conditions, the role of ULK1 and ULK2 in trafficking of proteins is more important than its role in autophagy, at least in brain cells " said the corresponding  author.

Autophagy maintains cellular homeostasis by recycling intermediate metabolites sequestered within double-membrane-bound vesicles, like phagosomes. The ER serves as a platform and a source of membranes for this process. Although the researchers were expecting autophagy to be defective when both enzymes were impaired, they were surprised stress arose in the ER that resulted in selective loss of neurons in the brains of mice (hippocampal neurons). Restoring ER-to-Golgi trafficking in cells deficient in the two enzymes quelled the ER stress response.

Mice engineered to lack the ULK 1 and 2 enzymes in the central nervous system showed a loss of neurons in the brain. The neurons showed no accumulation of P62+/ubiquitin+ inclusions or abnormal membranous structures, which are observed in mice lacking other autophagy genes. Rather, neuronal death was associated with activation of the unfolded protein response (UPR) pathway.

By looking at the proteins involved in this response the researchers were able to identify a key partner protein involved in the process. An unbiased proteomics approach identified SEC16A as an ULK1/2 interaction partner.

They also determined that phosphorylation of this protein was an important control point in the trafficking process that delivers proteins to the cell surface. ULK-mediated phosphorylation of SEC16A regulated the assembly of endoplasmic reticulum (ER) exit sites and ER-to-Golgi trafficking of specific cargo, and did not require other autophagy proteins (e.g., ATG13). The defect in ER-to-Golgi trafficking activated the UPR pathway in ULK-deficient cells; both processes were reversed upon expression of SEC16A with a phosphomimetic substitution.

The unexpected roles for ULK1 and ULK2 in promoting ER-to-Golgi trafficking of proteins, which seem to have been conserved throughout evolution, appear to be essential for maintaining cellular homeostasis and the integrity of the cell.