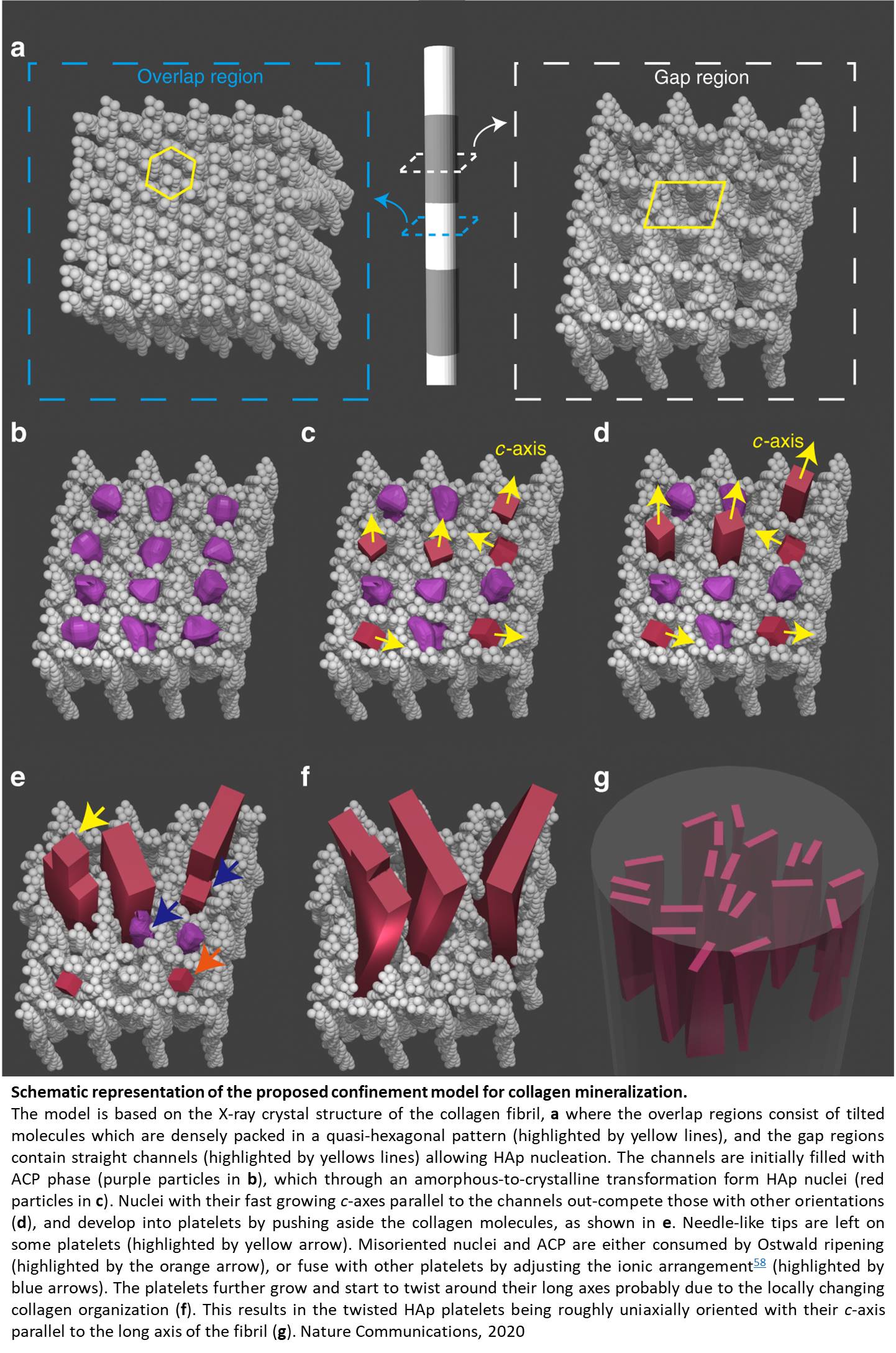 The way in which bone formation occurs needs to be redefined. This was revealed by researchers in a publication in Nature Communications. It turns out that bone formation does not require complex biomolecules in collagen at all. This means that the production of bone substitutes and biomaterials is less complicated than was previously thought.

Bones are vital. They form the scaffolding material for our muscles, which allow us to move. They protect vulnerable organs like the brain and lungs, and they accommodate the stem cells that produce our blood and immune system. Without bones, people could not exist. This is despite the fact that bones are seemingly very simple things, consisting mainly of a mix of collagen and calcium phosphate.

Ten years ago, the authors published an article in Nature Materials in which they demonstrated that nothing was needed other than collagen (long strands of connective tissue) and tiny pieces of calcium phosphate. "Nothing was known about the way in which the crystals in the collagen actually developed into small plates and then arranged themselves in an imbricate formation," says the senior author. "The generally accepted idea was that the bioactive molecules in this collagen strung the crystals together to form plates that were three nanometers thick, twenty nanometers wide and sixty-five nanometers long. A nanometer is one billionth of a meter."

Ten years ago, it was not possible to depict these processes on such a tiny scale. But the authors soon came to doubt the idea that had been embraced by his field. The senior author: "When we replaced the calcium phosphate with other minerals, the same tiny plates were created. Bioactive molecules are very selective, which immediately made us question the prevailing idea." What followed was a scientific Sisyphean task that was carried out against the establishment, which after ten years has now ruled in his favor with a publication in Nature Communications.

The first thing that the authors challenged was the idea of crystallized plates being stacked 'like a deck of cards'. Using an electron microscope they recorded approximately one hundred two-dimensional (2D) images of bone under different angles, which resulted in three-dimensional images (3D) that showed something entirely different. Even though the plates were all laying in the longitudinal direction of the collagen, they were not neatly stacked against each other like playing cards. The new plates that could continuously be seen lay against each other at different angles.

Together with the expert who first reported on the structure of collagen in 2006 and a specialist who studies crystallization in confined spaces, the function of the collagen was meticulously investigated. Collagen appeared to have narrow cavities in the length direction, which were infiltrated by the calcium phosphate that then started to crystallize. "This wasn't happening under the guidance of bioactive molecules in the collagen, but was a blind process that was dominated by the laws of physical chemistry", says the author. "Calcium phosphate that crystallized in the length direction had a selection advantage, precisely because of these narrow collagen cavities. As a result, it was only very thin needles that were initially created in such a cavity. This needle then grew out into a small plate of calcium phosphate that pushed the surrounding collagen away."

It is not possible to closely monitor the process of bone growth in humans. The authors have been using a model in which bone growth can be simulated outside an organism. This allowes them to see the process as it gradually takes place. And the final result is similar to what was found in the human bone material that has frequently become available after surgery. "This has consequently allowed us to gradually provide a new argumentation for the way in which our bones are formed, and how they grow and harden."

This fundamental research also has consequences from the practical viewpoint, claims the first author. "If the growth of crystals need not take place in a matrix with extremely complex and precious biomolecules, but can also simply be done in channels made of inexpensive polymer, this will drastically simplify the process of making biomaterials and bone substitutes. And if we can do this without having to sacrifice the properties of these materials it means that our results will also be valuable to the patient."

The article in Nature Communications will need to overturn the perception of bone formation once and for all. But the process of bone formation is more complex than this, claims the senior author: "Bone is not only formed within, but also outside the collagen. Various proteins seem to play a role in this process."