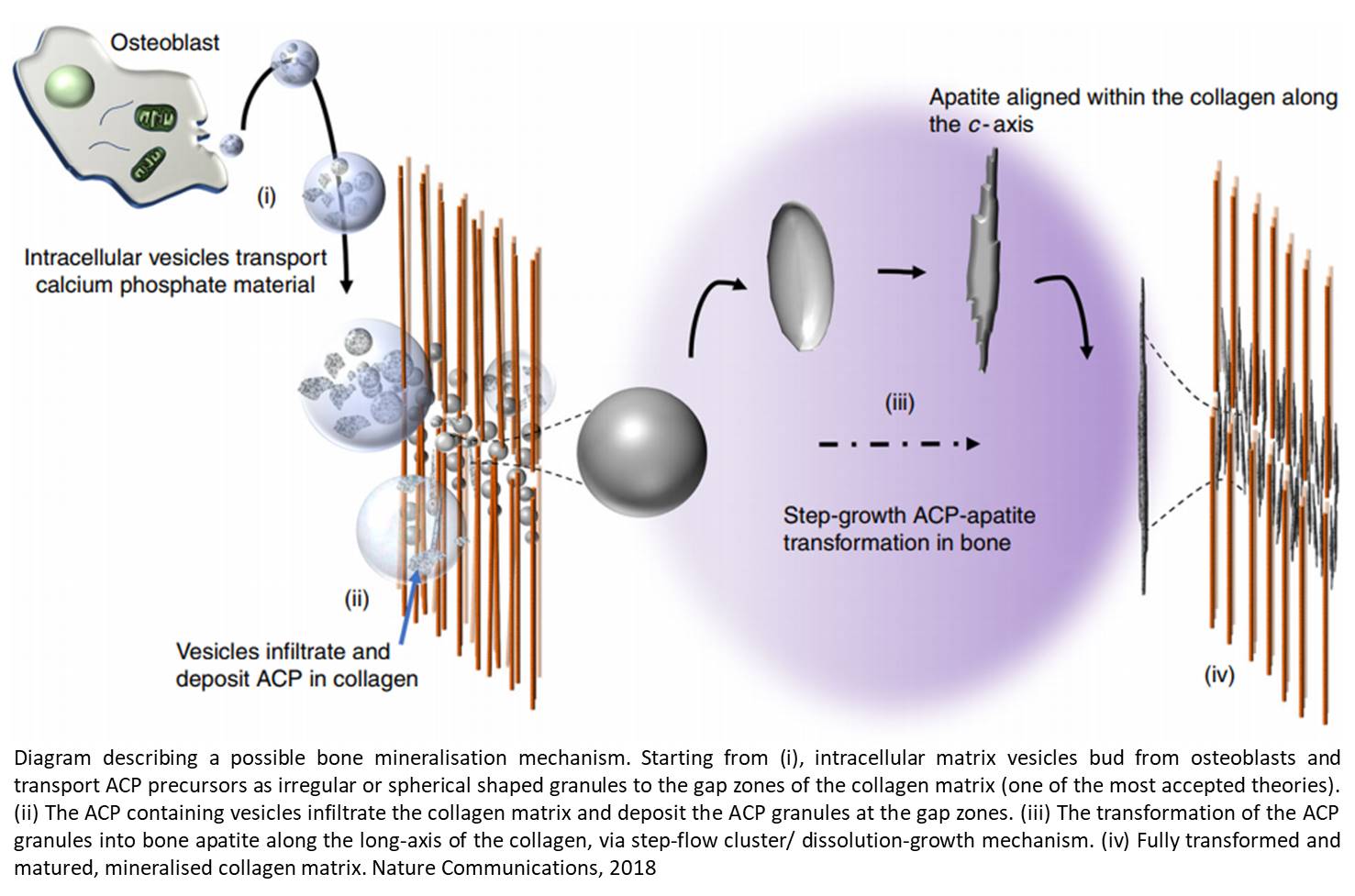 Researchers have discovered how our bones grow at an atomic level, showing how an unstructured mass orders itself into a perfectly arranged bone structure. The discovery offers new insights, which could yield improved new implants, as well as increasing our knowledge of bone diseases such as osteoporosis.

The bones in our body grow through several stages, with atoms and molecules joining together, and those bigger groupings joining together in turn. One early stage in the growth process is when calcium phosphate molecules crystallise, which means that they transform from an amorphous mass into an ordered structure. Many stages of this transformation were previously a mystery, but now, through a project looking at an imitation of how our bones are built, the researchers have been able to follow this crystallisation process at an atomic level. Their results are now published in the scientific journal Nature Communications.

The researchers were developing a method of creating artificial bone through additive manufacturing, or 3D printing. The resulting structure is built up in the same way, with the same properties, as real bone. Once fully developed, it will enable the formation of naturalistic implants, which could replace the metal and plastic technologies currently in use. As the team began to imitate natural bone tissue functions, they saw that they had created the possibility to study the phenomenon in a setting highly resembling the environment in living tissue.

The team's artificial bone-like substance mimicked the way real bone grows. The smallest structural building blocks in the skeleton are groups of strings consisting of the protein collagen. To mineralize these strings, cells send out spherical particles known as vesicles, which contain calcium phosphate. These vesicles release the calcium phosphate into confined spaces between the collagen strings. There, the calcium phosphate begins to transform from an amorphous mass into an ordered crystalline structure, which creates the bone's characteristic features of remarkable resistance to shocks and bending.

The researchers followed this cycle with the help of electron microscopes and now show in their paper how it happens at the atomic level. Despite the fact that bone crystallisation naturally occurs in a biological environment, it is not a biological process. Instead, calcium phosphate's intrinsic physical characteristics define how it crystallises and builds up, following the laws of thermodynamics. The molecules are drawn to the place where the energy level is lowest, which results in it building itself into a perfectly crystallised structure.

"Within the transmission electron microscope, we could follow the stages of how the material transformed itself into an ordered structure. This enables it to achieve as low an energy level as possible, and therefore a more stable state," says the author.

The researchers are the first to show in high resolution what happens when bones crystallise. The results could influence the way many common bone related illnesses are treated.

"Our results could be significant for the treatment of bone disease such as osteoporosis, which today is a common illness, especially among older women. Osteoporosis is when there is an imbalance between how fast bones break down and are being re-formed, which are natural processes in the body," says the senior author.