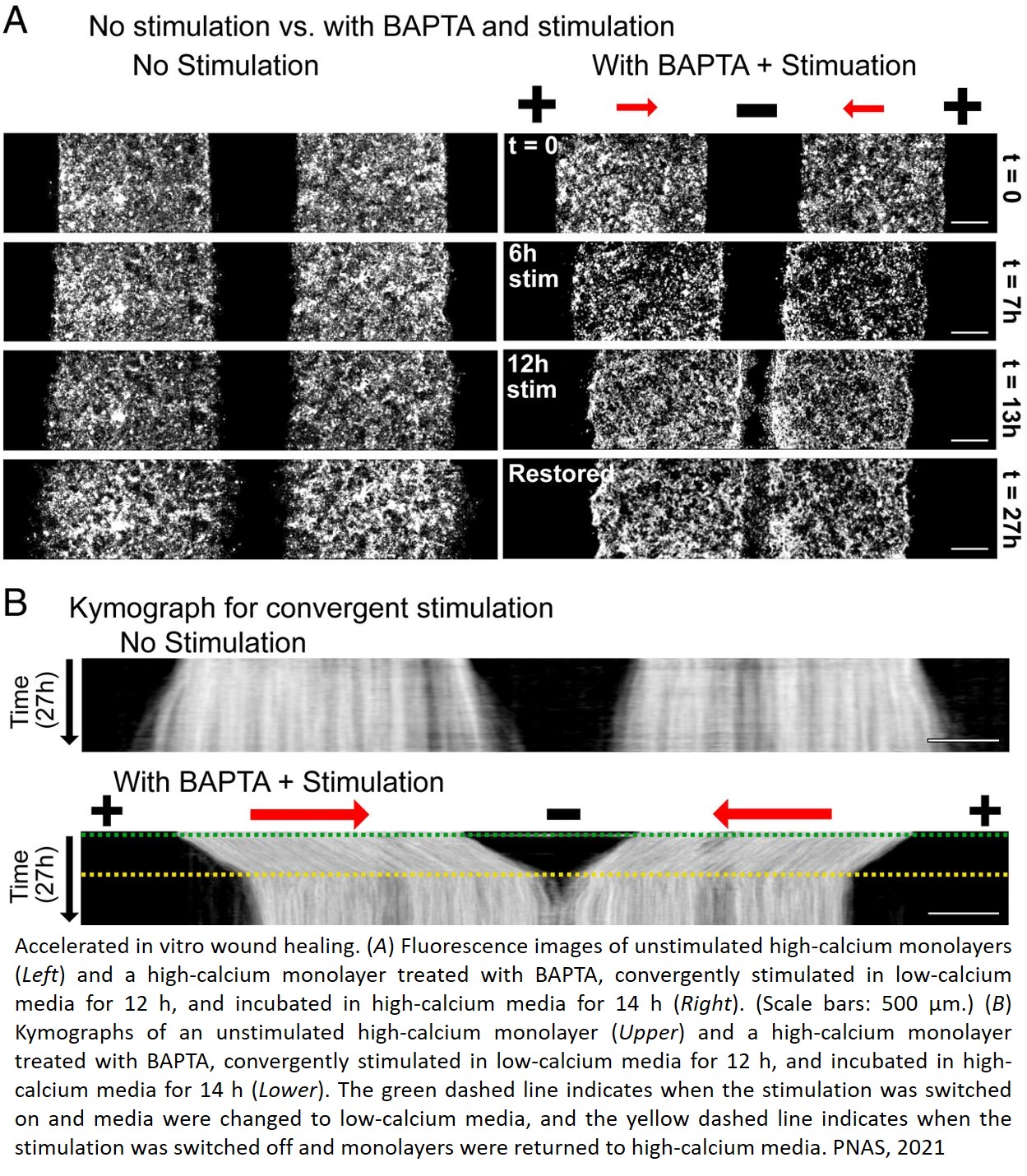 In a new study, the researchers overcame the inertia typical of mature skin tissue by breaking the molecular connections between cells, applying an electrical field to direct their migration and then rebuilding the connections. This novel approach improves the controllability of tissues and may one day help optimize wound healing through electrical stimulation.

"There are a lot of reasons why people think electrical stimulation might help wound healing," said the study’s lead author. But despite promising clinical evidence from decades of use in patients, scientists have yet to work out how cells detect and respond to electric fields or how electrical stimulation can best be applied therapeutically. "It's kind of a black box," said the author.

"We discovered this basic phenomenon 175 years ago and we don't yet have commercial electric band aids," said the senior author, published the work in the Proceedings of the National Academy of Sciences. "No one really knows the rules for how to design these things."

In their previous work, the group used electric fields to program thousands of individual cells to move in circles and around corners. Their new study used a model of more mature skin — a single layer of mouse skin cells all latched together — which is harder to control. Instead of moving with the speed and precision of a marching band in response to an electric current, the mature skin cells inched along like a crowd of people holding hands with their neighbors.

The mature skin also posed another problem: Once the leading edge of cells advanced, it would peel away from the petri dish and die. "If you apply a command that differs from what the cells naturally ‘want’ to do, you get a tug-of-war," the author said. "The result was the tissues ripped themselves apart."

The authors suspected that the "handshakes" between cells prevented the tissue from fluidly following the electrical commands. These handshakes are proteins called cadherins that anchor neighboring cells together. They make tissues cohesive so they can move together but can also create traffic jams when cells don't have space to move.

Cadherins need calcium ions to complete their connections, so they grew the cells with different amounts of calcium and measured their response to electrical stimulation. They saw that the less calcium the cells had, the more fluid they became and the quicker they moved. "It goes really fast — I was very surprised," said the lead author.

Calcium has many effects on living tissues, however, so the authors had to confirm that the handshakes were to blame for the slow movement. They grew cells with an antibody that attaches to cadherins. With blocked handshakes, these cells moved more quickly.

After working out the ground rules of cell adhesiveness, the researchers developed a solution to their sticky cell problem. They grew a layer of skin cells in a high calcium solution so they made their normal connections. Then they treated the cells with a chemical that grabs up calcium ions to break up the cellular handshakes. When they lowered the calcium level and applied the electric field, the cells moved on command. Finally, they restored the high calcium level to reinstate the handshakes, resulting in a healthy and cohesive layer of skin cells.

To demonstrate that this approach has the potential to accelerate healing, Shim performed the above experiment using an electrobioreactor developed in the lab that mimics the closing of a wound. Unlike other models of electrotaxis where the electric field moves cells in one direction, their new system exposes cells to an electric field focused on the center of the injury. They showed that the stimulated tissues successfully came together while the unstimulated ones remained largely separate. The group described their electrobioreactor in a new paper in Biosensors and Bioelectronics.

Next, the authors plan to move from their two-dimensional model into a 3D one. Human skin, for example, is composed of different tissues, much like a layer cake. Depending on how these techniques work in a 3D skin model, the results could indicate whether the same approach will work on actual wounds. Many tissues use cadherin handshakes to stick cells together, but there are other ways tissues stay connected.

This work could be applied not only to help wounds heal faster, but also to fine-tune the healing process to prevent tightness and reduce scarring.

"We started out with this nice, warm and fuzzy approach to engineering group behaviors by saying, let's see what the tissue wants to do and harmonize with that. It turns out, that's too simple," said the senior author. "Sometimes, they don't want to listen to you properly. Sometimes you just have to change the rules."