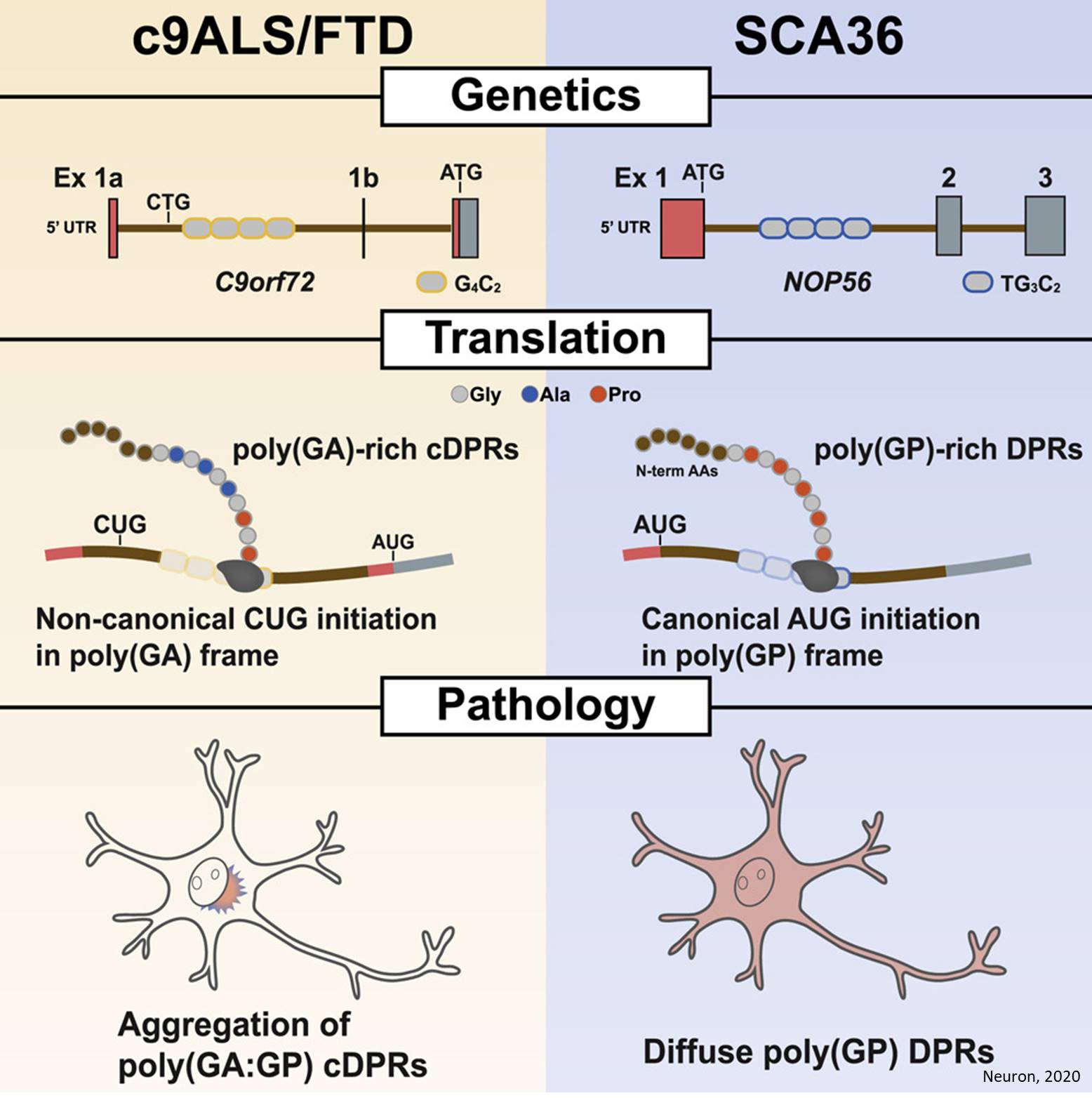 An international team has gained insight into the pathological mechanisms behind two devastating neurodegenerative diseases. The scientists compared the most common inherited form of amyotrophic lateral sclerosis and frontotemporal dementia (ALS/FTD) with a rarer disease called spinocerebellar ataxia type 36 (SCA36).

Both of the diseases are caused by abnormally expanded and strikingly similar DNA repeats. However, ALS progresses quickly, typically killing patients within a year or two, while the disease progression of SCA36 proceeds more slowly over the course of decades. In ALS/FTD it appears that protein products can poison cells in the nervous system. Whether similar protein products exist in SCA36 was not known.

The study, published in Neuron, provides a guide to types of protein gobbledygook that build up in brain cells in both disorders, and which should be reduced if the new mode of treatment is working in clinical trials.

"We are thinking of these diseases as genetic doppelgängers," says the lead author. "By that, I mean they are genetically similar, but the neurodegeneration progresses differently for each disease. We can use this research to understand each of the respective disorders much better -- and hopefully help patients improve their quality of life down the road with better treatments."

An estimated 16,000 people in the United States have ALS, a progressive neurodegenerative disease that affects nerve cells in the brain and spinal cord. The most common inherited form of ALS/FTD occurs because there is an abnormally expanded repeat of six DNA "letters" stuck into a gene called c9orf72.

Some of the degeneration of motor neurons comes from the expanded repeat being made into proteins that repeat two amino acids over and over. It's like a printing press being forced to print entire pages of "GPGPGPGP", "GAGAGAGA"..." or "PRPRPRPR" In c9 ALS, those proteins are thought to build up inside brain cells and poison them. A striking finding is that in c9 ALS, there are others chimeric variants e.g. "GAGAGAGPGPGP" suggesting these toxic proteins are more complex than previously thought.

"A major goal in the field has been to identify and characterize the various types of pathological aggregates that accumulate in patient brains as 'bad actors' that cause neurodegeneration," the author says. "Here we identify fundamental differences in this process for these two neurological diseases with disparate clinical outcomes. I think this is a paradigm shift for how heterogenous this process is in ALS and points to possible therapeutic strategies that might mitigate multiple bad actors simultaneously."

The two diseases (c9 form of ALS and SCA36) both have abnormally expanded 6-letter genetic repeats, but the letters that are being repeated are different. The authors were able to show that the nonsensical protein products from the expanded repeats aggregate in c9 ALS patients' cells but do not in SCA36. The author says it was surprising because the proteins were predicted to be similar in the two diseases.

"Studying the differences in the aberrant proteins gives insight into both diseases," the author says.

SCA36, one of several types of SCA, is a condition characterized by progressive problems with movement that typically begins in mid-adulthood. They also develop hearing loss and muscle twitches over time, including losing the ability to move their tongue. Their legs, forearms and hands atrophy as the condition worsens.

The mutation for SCA36 was discovered around same time as the c9 form of ALS/FTD in 2011. The ALS/FTD discovery has since formed the basis for myriad studies implicating these toxic protein aggregates as contributing drivers of disease in ALS and frontotemporal dementia (FTD).

"The genetic overlap was known, however the rate limiting step in studying SCA36 has been the availability of patient samples," says the author.

In a separate paper released the same day in Cell Reports, these finding were further supported by similar observations in a novel mouse model of SCA36.

A new technology for treating diseases with expanded DNA repeats - including Huntington's disease and myotonic dystrophy, as well as some forms of ALS and SCA -- is emerging. "Antisense oligonucleotides" can be delivered to the nervous system and shut down production of the toxic proteins. The Emory ALS clinic is participating in some of the ASO clinical trials.

"We think our analysis will guide future research into potential treatments, for example, by developing drugs that can best target these related aggregation-prone molecules," the author says.