Controlling crowding inside the cell 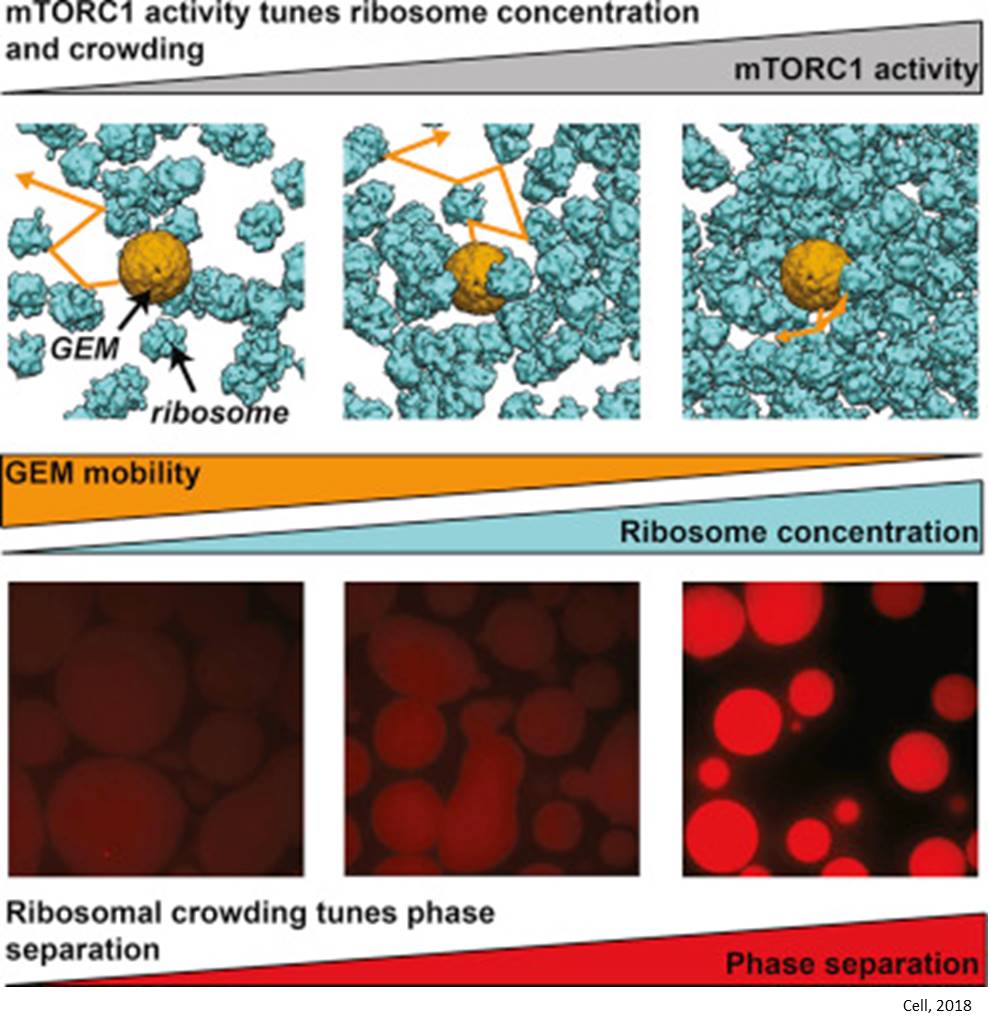 Among the most studied protein machines in history, mTORC1 has long been known to sense whether a cell has enough energy to build the proteins it needs to multiply as part of growth. Because faulty versions of mTORC1 contribute to the abnormal growth seen in cancer, drugs targeting the complex have been the subject of 1,300 clinical trials since 1970.

Now a new study finds that mTORC1 has a second function of profound importance: controlling how "crowded" human cells become.

The study published  in the journal Cell explains for the first time the workings of a physical quality that cells use to regulate their actions, and more closely links malfunctions in mTORC1-related genes to several diseases of aging.

"Our results begin to clarify how mTORC1-driven changes in crowding could cause the insides of human cells to solidify as a person ages, packing more proteins into the same space and interfering with functions that require them to move around," says senior study author. "This work may also help explain the origin of the solid protein clumps that appear in the cells of patients with cardiovascular diseases, diabetes and Alzheimer's."

Based on past studies, biologists have long concluded that cells require for survival a limit on the number of proteins in their fluid-filled inner spaces, the cytoplasm where many cellular functions occur.

Specifically, the current study found that the mTORC1 complex controls crowding by determining the number of ribosomes, multi-protein machines that build other proteins there.

By engineering cells to make their own glowing tracers to measure crowding, the researchers showed that, by adjusting levels of mTORC1 action, they could cause a two-fold swing in the ability of multi-protein cellular machines to move around (diffuse) in the cytoplasm of human kidney cells.

Experiments further confirmed ribosomes as the main "crowding agent" regulated by mTORC1, influencing the physical environment of large molecules - like those particularly important to cell growth and death - but leaving alone reactions depending on single proteins.

Many proteins are barely dissolved in the cell, with as much chance of glomming onto each other as to interact with the liquid surrounding them. Crowding increases the chances that these like-structured molecules will together undergo a shift from one state of matter to another (e.g. liquid to a solid), say the authors. In one such "phase transition," similar proteins spread out in the cytoplasmic fluid come together to form dense liquid droplets, the way oil forms its own globs in vinegar.

"The biological consequences of phase changes are an area of intense inquiry right now, with emerging theories suggesting that genetic material, for instance, forms droplets that help to turn genes on and off," says the senior author.

By separating protein complexes into phase-separated droplets, or into even denser gels, the cell forms semi-compartments that do not mix as freely with their surroundings, spaces in which more distinct, faster biological reactions can proceed.

The current study suggests that malfunctioning mTORC1 may increase crowding, and therefore cause droplets and gels to become the solids found in cells with diseases of aging - like the tau fibers that build up in the brain tissue of Alzheimer's patients.

Furthermore, the decades of limited success by mTORC1-based cancer drugs could proceed in part from the crowding effect, says the senior author. For example, mTORC1 activation may be important to initiate cancer in some cases, but could hinder aggressive growth later as cancer cells become crowded with ribosomes. Thus, the current line of work may help to set new guidelines about when to use mTORC1 inhibitors based on the stage of a patient's cancer.

Moving forward, the team also is studying how crowding affects phase change in different cell types, with the long-term goal of designing anti-crowding therapies for neurodegeneration and cancer.