Controlling the pruning and strengthening of neuron branches 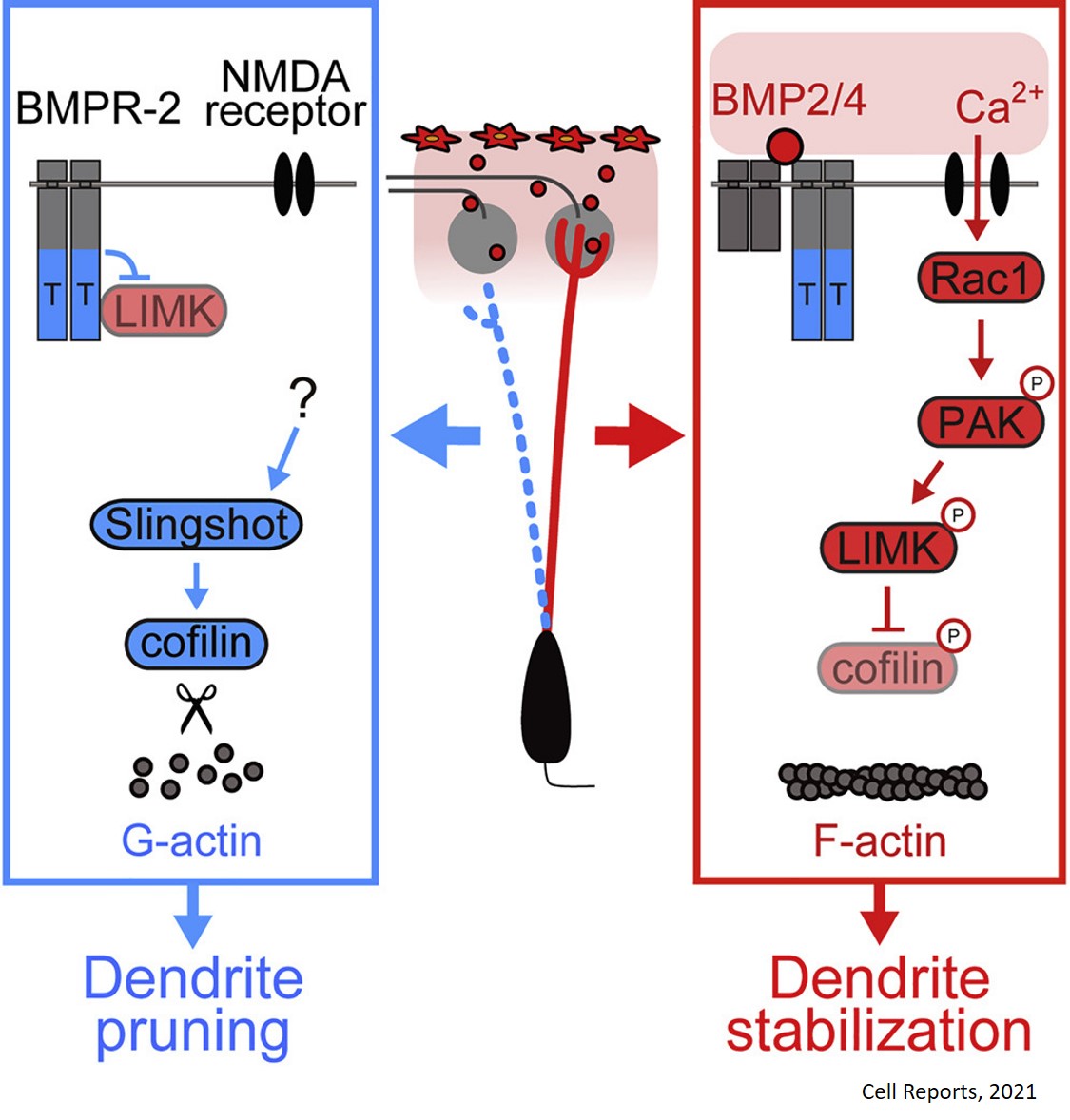 At this very moment, the billions of neurons in your brain are using their trillions of connections to enable you to read and comprehend this sentence.

Now, by studying the neurons involved in the sense of smell, researchers report a new mechanism behind the biomolecular bonsai that selectively strengthens these connections.

How neuronal circuits remodel themselves over time, especially during early development, is an open question in neurobiology. At the start of neuronal development, neurons form excessive amounts of connections that are gradually eliminated as others are strengthened.

Studying a type of olfactory neuron known as a mitral cell in mice, the research team found that the protein BMPR-2 is one of the key regulators of selective stabilization of neuron branching and that the strengthening only happens when the branch receives signals from other neurons.

"A main reason we use olfactory neurons is because they are easy to access and study, and mitral cells develop only a single branch," explains the first author of the study published in Cell Reports.

"When an olfactory neuron detects a specific molecule that we smell, it sends the signal to a specific 'way station' in the brain's olfactory bulb called a glomerulus. That signal is then relayed to the brain through mitral cells. One mitral cell receives signals for one specific smell."

At a very early stage in development, these mitral cells send branches into many glomeruli. As time progresses, these branches--known as dendrites--are pruned away to leave only a single, strong connection. The research team set out to uncover what kind of molecular cues caused one branch to be favored over others.

After analyzing candidate factors known to control dendritic growth and remodeling from extrinsic signals, the team focused on the protein BMPR-2.

"When we disrupted BMPR-2, mitral cells would fail in the selective stabilization and form multiple connections to multiple glomeruli," explains the author. "In our next step, we found that BMPR-2 is bound to a protein called LIMK, and only when BMPR-2 is activated by the cell-signaling protein called BMP does it release LIMK into the cell."

LIMK is known to activate the process to assemble actin, the cell's 'skeleton.' Once activated, actin begins to build long fibers that stabilize dendrites.

However, this still did not explain how this mechanism strengthens specific dendrites. The team's next step was to find the elements that activate LIMK. Their investigation led them to identify a well-known neurotransmitter, glutamic acid, as one of the factors that kicks off the process.

"Glutamic acid is required for signals to be transmitted between neurons. Taken together, this means that both BMP and neural signals are necessary to form actin, thereby inducing the construction of a stable dendrite," states the authors.

"It's like the brake and accelerator in your car. You need to release the brake, in this case BMPR-2 releasing LIMK, and then press on the accelerator--the neurotransmitter signal--for your machinery to move forward. The necessity of simultaneous control, or inputs, is the basis of selective branch stabilization."

The team lead concludes, "Hopefully these new insights into neural development can lead to further understanding of the fundamental mechanisms behind critical brain functions and possible treatments into pathologies underlined by synaptic dysfunction."

"Our next step is to find the factors that promote dendrite pruning, and we also want to see if this mechanism in the olfactory bulb is fundamental throughout the neocortex."