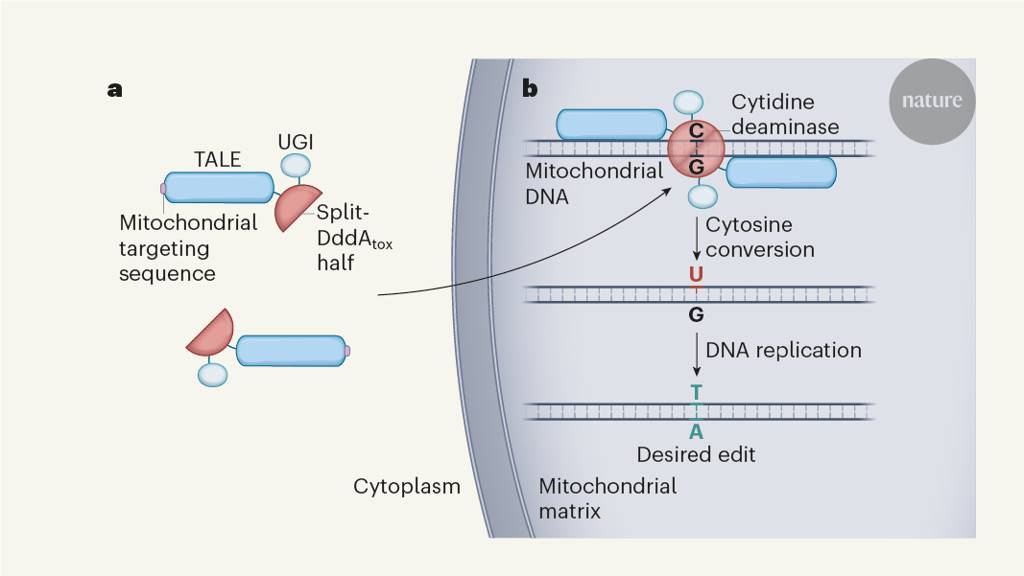 The genome in mitochondria -- the cell's energy-producing organelles -- is involved in disease and key biological functions, and the ability to precisely alter this DNA would allow scientists to learn more about the effects of these genes and mutations. But the precision editing technologies that have revolutionized DNA editing in the cell nucleus have been unable to reach the mitochondrial genome.

Now, a research team has broken this barrier with a new type of molecular editor that can make precise C* G-to-T* A nucleotide changes in mitochondrial DNA. The editor, engineered from a bacterial toxin, enables modeling of disease-associated mitochondrial DNA mutations, opening the door to a better understanding of genetic changes associated with cancer, aging, and more.  The work is described in the journal Nature,

Most current approaches to studying specific variations in mitochondrial DNA involve using patient-derived cells, or a small number of animal models, in which mutations have occurred by chance. "But these methods pose major limitations, and creating new, defined models has been impossible," said co-author.

While CRISPR-based technologies can rapidly and precisely edit DNA in the cell nucleus, greatly facilitating model creation for many diseases, these tools haven't been able to edit mitochondrial DNA because they rely on a guide RNA to target a location in the genome. The mitochondrial membrane allows proteins to enter the organelle, but is not known to have accessible pathways for transporting RNA.

One piece of a potential solution arose when the lab identified a toxic protein made by the pathogen Burkholderia cenocepacia. This protein can kill other bacteria by directly changing cytosine (C) to uracil (U) in double-stranded DNA.

"What is special about this protein, and what suggested to us that it might have unique editing applications, is its ability to target double-stranded DNA. All previously described deaminases that target DNA work only on the single-stranded form, which limits how they can be used as genome editors," said the senior author. The team determined the structure and biochemical characteristics of the toxin, called DddA.

"We realized that the properties of this 'bacterial warfare agent' could allow it to be paired with a non-CRISPR-based DNA-targeting system, raising the possibility of making base editors that do not rely on CRISPR or on guide RNAs," explained the other co-senior author. "It could enable us to finally perform precision genome editing in one of the last corners of biology that has remained untouchable by such technology -- mitochondrial DNA."

The team's first major challenge was to eliminate the toxicity of the bacterial agent so that it could edit DNA without damaging the cell. The researchers divided the protein into two inactive halves that could edit DNA only when they combined.

The researchers tethered the two halves of the tamed bacterial toxin to TALE DNA-binding proteins, which can locate and bind a target DNA sequence in both the nucleus and mitochondria without the use of a guide RNA. When these pieces bind DNA next to each other, the complex reassembles into its active form, and converts C to U at that location -- ultimately resulting in a C* G-to-T* A base edit. The researchers called their tool a DddA-derived cytosine base editor (DdCBE).

One goal for the field now will be to develop editors that can precisely make other types of genetic changes in mitochondrial DNA.