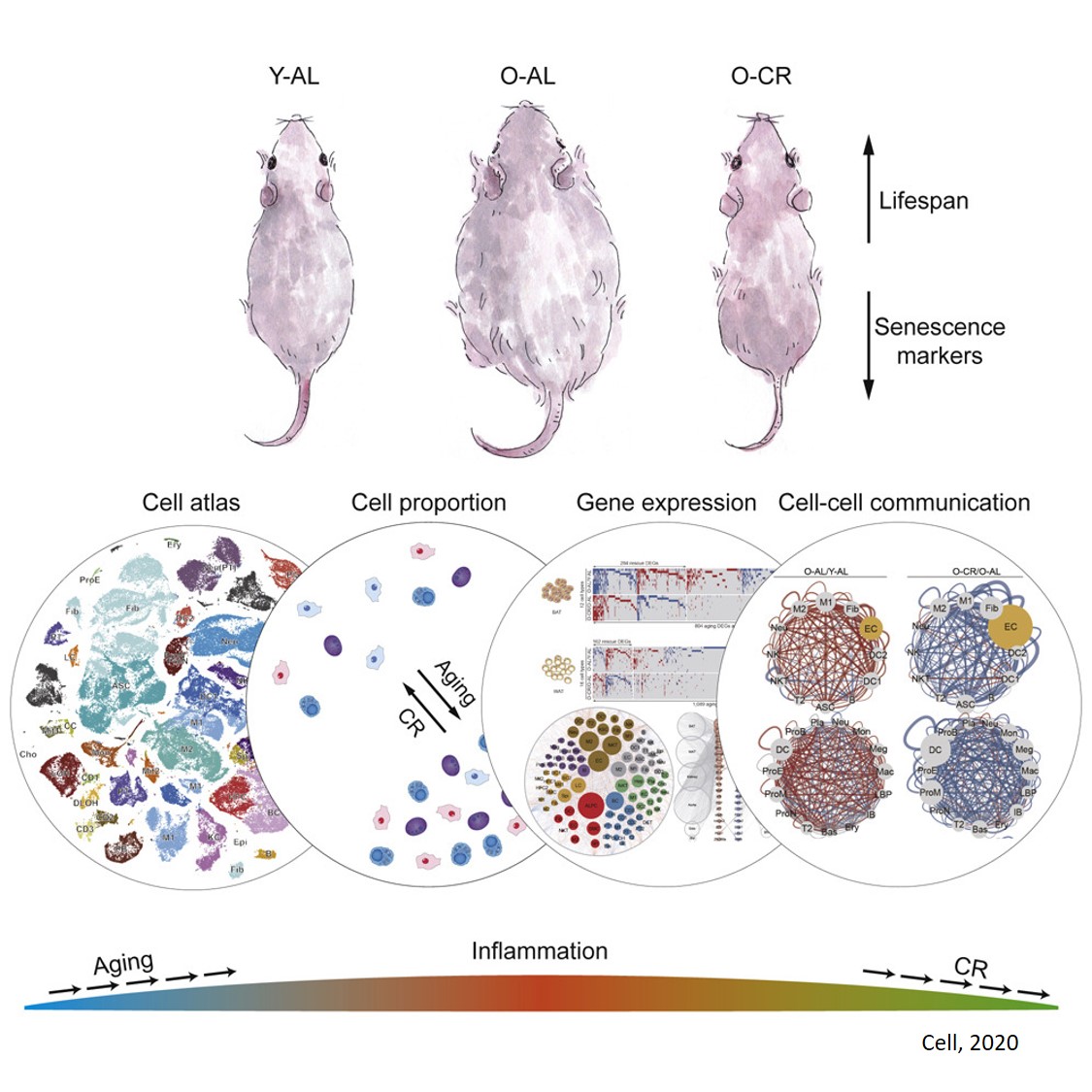 If you want to reduce levels of inflammation throughout your body, delay the onset of age-related diseases, and live longer--eat less food. That's the conclusion of a new study by scientists that provides the most detailed report to date of the cellular effects of a calorie-restricted diet in rats. While the benefits of caloric restriction have long been known, the new results show how this restriction can protect against aging in cellular pathways, as detailed in the journal Cell.

"We already knew that calorie restriction increases life span, but now we've shown all the changes that occur at a single-cell level to cause that," says the senior author of the new paper. "This gives us targets that we may eventually be able to act on with drugs to treat aging in humans."

Aging is the highest risk factor for many human diseases, including cancer, dementia, diabetes and metabolic syndrome. Caloric restriction has been shown in animal models to be one of the most effective interventions against these age-related diseases. And although researchers know that individual cells undergo many changes as an organism ages, they have not known how caloric restriction might influence these changes.

In the new paper, the authors compared rats who ate 30 percent fewer calories with rats on normal diets. The animals' diets were controlled from age 18 months through 27 months. (In humans, this would be roughly equivalent to someone following a calorie-restricted diet from age 50 through 70.)

At both the start and the conclusion of the diet, the team isolated and analyzed a total of 168,703 cells from 40 cell types in the 56 rats. The cells came from fat tissues, liver, kidney, aorta, skin, bone marrow, brain and muscle. In each isolated cell, the researchers used single-cell genetic-sequencing technology to measure the activity levels of genes. They also looked at the overall composition of cell types within any given tissue. Then, they compared old and young mice on each diet.

Many of the changes that occurred as rats on the normal diet grew older didn't occur in rats on a restricted diet; even in old age, many of the tissues and cells of animals on the diet closely resembled those of young rats. Overall, 57 percent of the age-related changes in cell composition seen in the tissues of rats on a normal diet were not present in the rats on the calorie restricted diet.

"This approach not only told us the effect of calorie restriction on these cell types, but also provided the most complete and detailed study of what happens at a single-cell level during aging," says co-corresponding author.

Some of the cells and genes most affected by the diet related to immunity, inflammation and lipid metabolism. The number of immune cells in nearly every tissue studied dramatically increased as control rats aged but was not affected by age in rats with restricted calories. In brown adipose tissue--one type of fat tissue--a calorie-restricted diet reverted the expression levels of many anti-inflammatory genes to those seen in young animals.

"The primary discovery in the current study is that the increase in the inflammatory response during aging could be systematically repressed by caloric restriction" says co-corresponding author.

"People say that 'you are what you eat,' and we're finding that to be true in lots of ways," says another of the paper's authors. "The state of your cells as you age clearly depends on your interactions with your environment, which includes what and how much you eat."

The team is now trying to utilize this information in an effort to discover aging drug targets and implement strategies towards increasing life and health span.