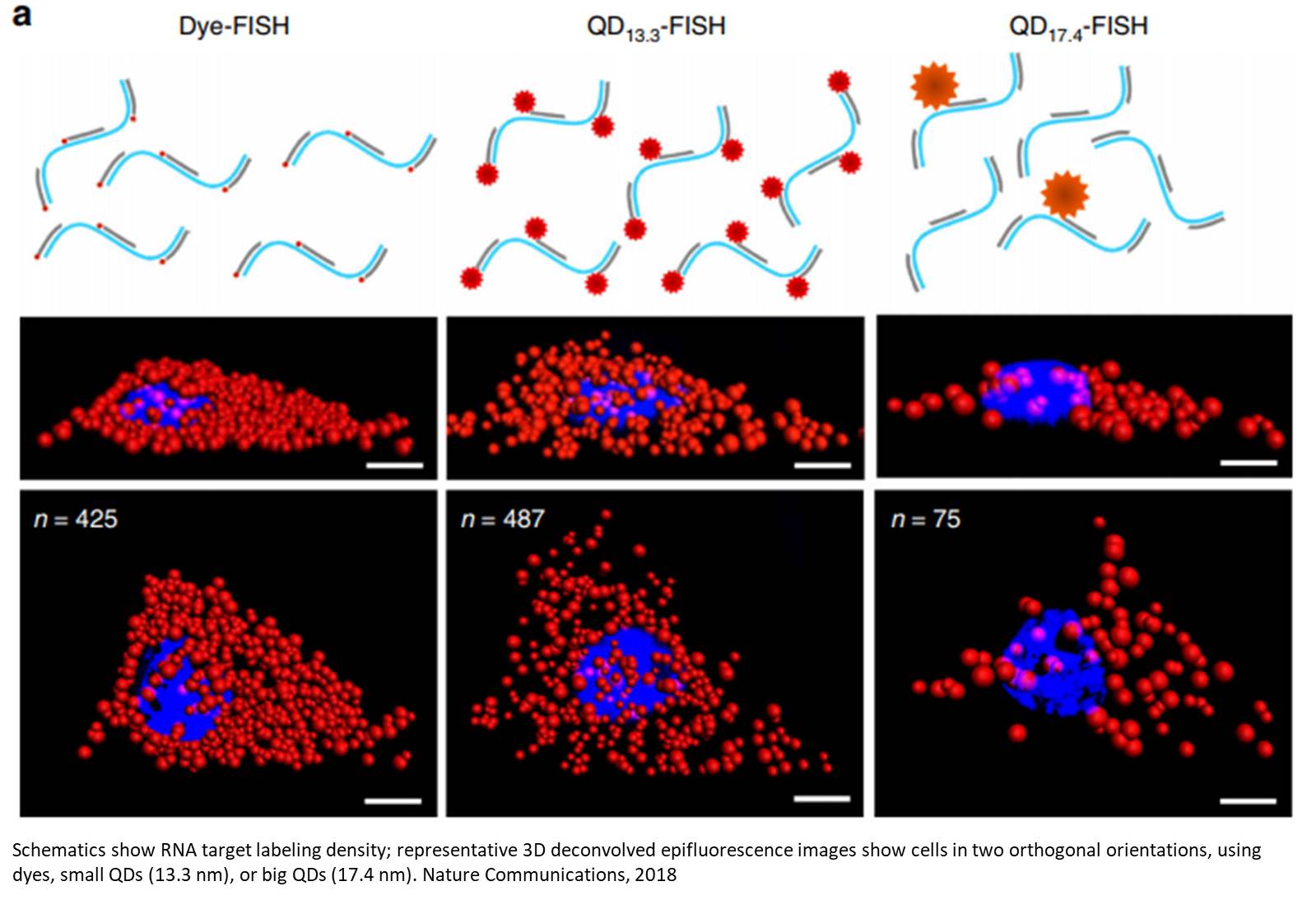 A team of researchers have engineered a new type of molecular probe that can measure and count RNA in cells and tissue without organic dyes. The probe is based on the conventional fluorescence in situ hybridization (FISH) technique, but it relies on compact quantum dots to illuminate molecules and diseased cells rather than fluorescent dyes.

Over the last 50 years, FISH has evolved into a multi-billion-dollar industry because it effectively images and counts DNA and RNA in single cells. However, FISH has its limitations due to the delicate nature of the dyes. For example, the dyes rapidly deteriorate and are not very good at imaging in three dimensions. In addition, conventional FISH can only read out a couple of RNA or DNA sequences at a time.

Quantum dots illuminate the locations of individual mRNA as red dots in the cytoplasm of a single HeLa cell. The blue region is the nucleus. "By replacing dyes with quantum dots, there are no stability issues whatsoever and we can count numerous RNAs with higher fidelity than before," said the senior author. "Moreover, we uncovered a fundamental limit to the size of a molecular label in cells, revealing new design rules for analysis in cells."

In their latest paper, published in Nature Communications, the team identified an optimal size for quantum dots in order to effectively work with the FISH protocol. This discovery enabled quantum dot-based FISH to match the labeling accuracies currently obtained with organic dyes.

The team created unique quantum dots that are made of a zinc, selenium, cadmium, and mercury alloy and are coated with polymers. "The core of the dot dictates the wavelength of emission, and the shell dictates how much light will be given off," said the senior author.

These dots can emit color independent of the size of the particle, which is not the case for conventional quantum dots. The dots are also small enough (7 nanometers) to fit on a probe that can maneuver between proteins and DNA in a cell, making them more comparable in size to the dyes used in conventional FISH probes.

"This is important because images of cells and tissues are acquired slice-by-slice in sequence, so later slices that are labeled with dyes are depleted before they can be imaged," said the senior author.