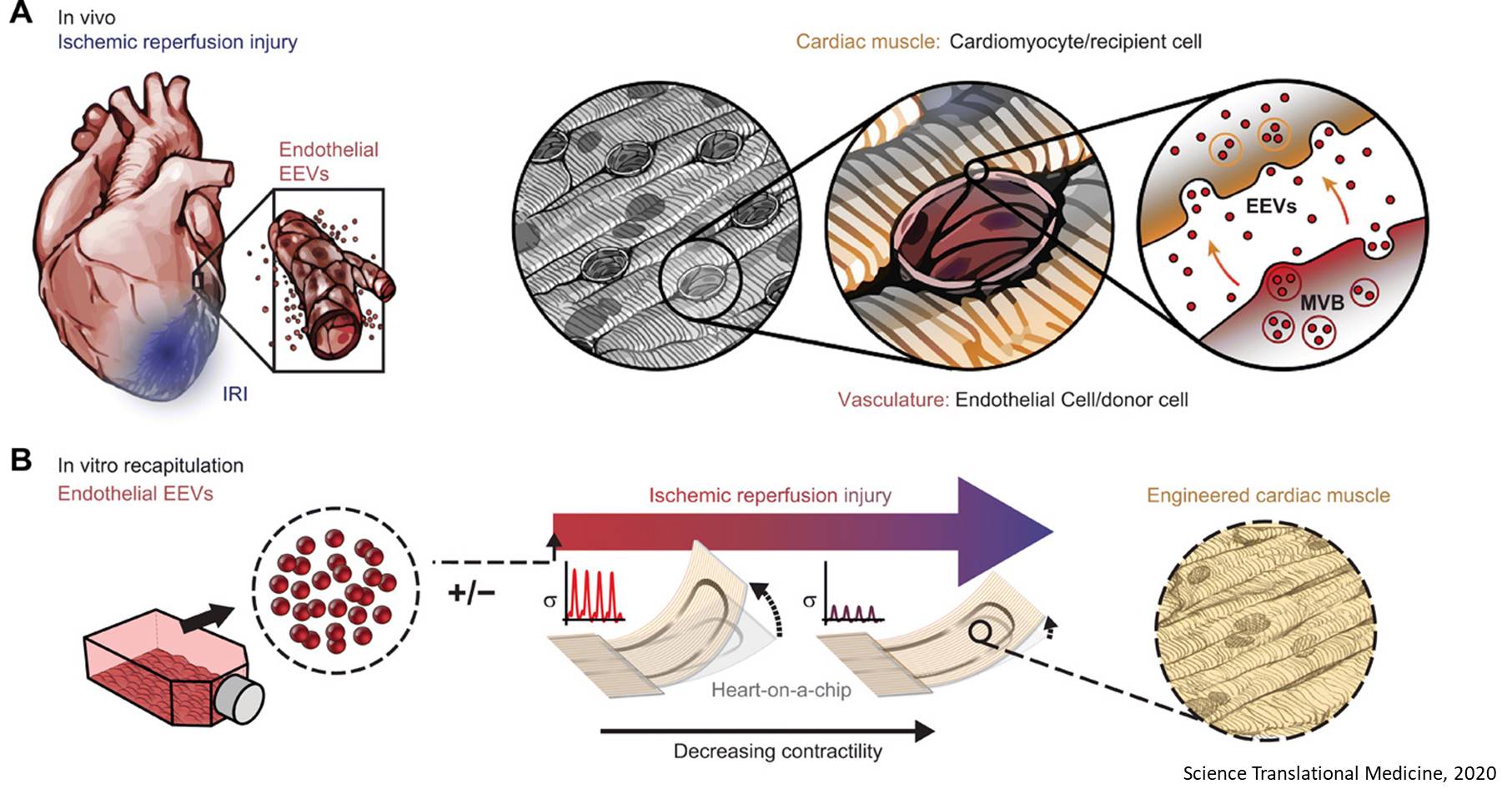 Extracellular vesicles (EVs) -- nanometer sized messengers that travel between cells to deliver cues and cargo -- are promising tools for the next generation of therapies for everything from autoimmune and neurodegenerative diseases to cancer and tissue injury. EVs derived from stem cells have already been shown to help heart cells recover after a heart attack, but exactly how they help and whether the beneficial effect is specific to EVs derived from stem cells has remained a mystery.

Now, researchers have unraveled potential mechanisms behind the healing power of EVs and demonstrated their capacity to not only revive cells after a heart attack but keep cells functioning while deprived of oxygen during a heart attack. The researchers demonstrated this functionality in human tissue using a heart-on-a-chip with embedded sensors that continuously tracked the contractions of the tissue.

The team also demonstrated that these intercellular travelers could be derived from endothelial cells, which line the surface of blood vessels and are more abundant and easier to maintain than stem cells.

The research is published in Science Translational Medicine.

"Our organ-on-chip technology has progressed to the point where we can now fight drug targets instead of fighting the chip design," said the senior author of the study. "With this study, we have mimicked a human disease on a chip with human cells and developed a novel therapeutic approach to treat it."

Heart attacks, or myocardial infarctions, occur when blood flow to the heart is blocked. Of course, the best way to treat a heart attack is to restore blood flow but that process actually may cause more damage to the cells in the heart. So-called ischemia-reperfusion injury (IRI) or reoxygenation injury, happens when blood supply returns to tissue after a period of lack of oxygen.

"The cellular response to IRI involves multiple mechanisms, such as calcium and proton overload, oxidative stress, mitochondrial dysfunction and more," said the first author of the paper. "This complex set of processes poses a challenge for the development of effective therapies that can address each of these problems."

That's where the endothelial-derived EVs (EEVs) come in. Because these vesicles are derived from vascular tissue, which is uniquely tuned to sense hypoxic stress, the researchers hypothesized that the cargo they carry could provide direct protection to cardiac muscle.

The researchers mapped the entire set of EEV proteins that are, or can be, expressed by the vesicles.

"Surprisingly, even though these vesicles are only a hundred and fifty nanometers in diameter, they contain almost 2,000 different proteins," said the author. "A lot of these proteins relate to metabolic processes like respiration, mitochondrial function, signaling and homeostasis. In other words, a lot of processes that relate to the cardiac response to stress. So, rather than one molecule that is therapeutic, we think that the exosomes contain a cocktail of molecules and proteins that can, all together, help the cell maintain homeostasis, deal with the stress, modify metabolic action and reduce the amount of injury."

The team tested the effect of EEVs on human heart tissue using the heart-on-a-chip model. Organ-on-chip platforms mimic the structure and function of native tissue and allow researchers to observe, in real time, the effects of injuries and treatments in human tissue. Here, the researchers simulated a myocardial infarction and reoxygenation on chips that were infused with EEVs and those that were not.

The researchers found that in tissues treated with EEVs, the cardiomyocytes could better adapt to stress conditions and sustain a higher workload. The researchers induced injury by three hours of oxygen restrictions followed by 90 minutes of reoxygenation and then measured the fraction of dead cells and the contractile force of the tissue. The heart tissue treated with EEVs had half as many dead cells and had a contractile force four times higher than the untreated tissue after injury.

The team also found that injured cardiomyocytes that had been treated with EEVs exhibited a set of proteins that was more similar to the uninjured ones compared with untreated cells. Surprisingly, the team also observed that cells treated with EEVs continued to contract even without oxygen.

"Our findings indicate that EEVs could protect cardiac tissue from reoxygenation injury in part by supplementing the injured cells with proteins and signaling molecules that support different metabolic processes, paving the way for new therapeutic approaches," said co-author of the study.

"Exosomal cell therapies might be beneficial when the traditional model of one molecule, one target just won't cure the disease," said the author. "With the vesicles we administered, we believe we are taking a shotgun approach to hitting a network of drug targets. With our organ on chip platform, we will be poised to use synthetic exosomes in therapeutic manner that may be more efficient and amenable to more reliable manufacturing."