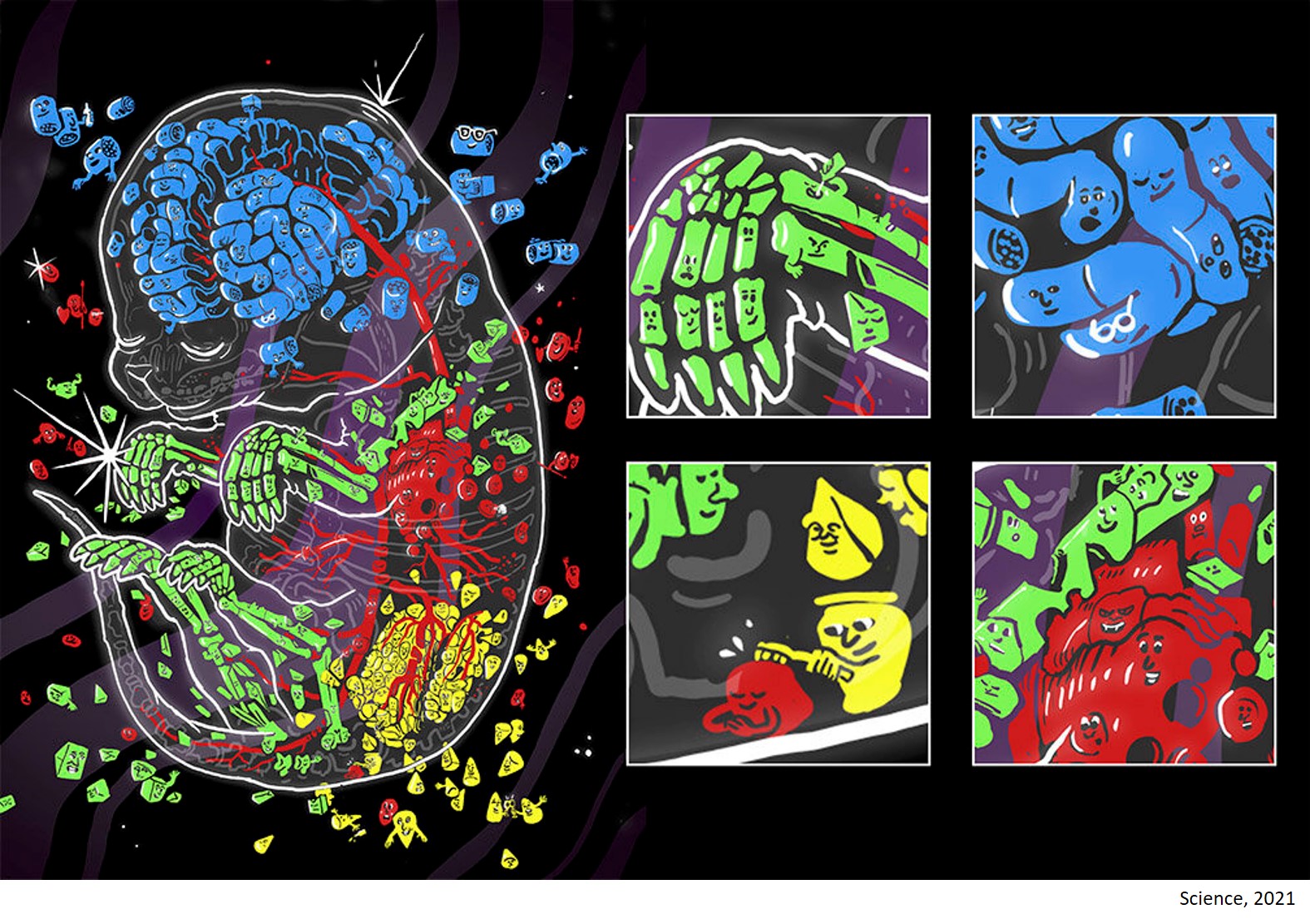 A new technique called sci-Space, combined with data from other technologies, could lead to four-dimensional atlases of gene expression across diverse cells during embryonic development of mammals.

Such atlases would map how the gene transcripts in individual cells reflect the passage of time, cell lineages, cell migration, and location on the developing embryo. They would also help illuminate the spatial regulation of gene expression.

Mammalian embryonic development is a remarkable phenomenon: a fertilized egg divides repeatedly and turns, in a matter of weeks or months, into a complex organism capable of a myriad of physiological processes and composed of a variety of cells, tissues, organs, anatomical structures.

A better understanding of how mammals form before birth -- particularly the prenatal spatial patterns of gene expression at a single-cell level during embryonic development -- could advance biomedical and veterinary research on a variety of conditions. These range from inherited disorders to congenital malformations and developmental delays. Understanding how organs originate might also assist future regenerative medicine efforts.

An international team demonstrated the proof-of-concept of their sci-Space technique in mouse embryos. Their results are published in Science.

The researchers observed the orchestration of genes in 120,000 cell nuclei. All the body's somatic cells contain the same DNA code. The researchers captured information on which genes were turned on or off in these nuclei as mouse embryos took shape. The scientists also investigated how cells' locations in an embryo affected which genes were activated during development.

This technique builds on previous work in which these scientists and other groups developed ways of conducting whole-organism profiling of gene expression and DNA-code accessibility, in thousands of single cells, during embryonic development. They did so to track the emergence and trajectory of various cell types.

How cells are organized spatially - what physical positions they take as an embryo forms - is critical to normal development. Misplacements, disruptions, or cells not showing at the right time in the right spot can cause serious problems or even prenatal death.

However, gaining knowledge on spatial patterns of gene expression has been technically difficult. It has been unwieldy to assay gene transcripts of individual cells over wide swaths of the embryo. This limited the scientific understanding of how spatial organization influences gene expression and, consequently, why which cell types form where, or how neighboring groups of cells influence each other's future roles.

The scientists on the present study had earlier developed a method to label cell nuclei, a technique they called sci-Plex. They then went on to index single-cell RNA sequencing, with a method called sci-RNA-sequencing.

Now, with sci-Space, by analyzing spatial coordinates and cell gene transcripts the scientists identified thousands of genes whose expression was anatomically patterned. For example, certain genetic profiles emerged in neurons in the brain and spinal cord and others in cardiac muscle cells in the heart.

The scientists also used spatial and gene profile information to annotate subtypes of cells. For example, while both blood vessel cells and heart muscle might both express the gene for a particular growth factor, only the heart muscle cells produced certain growth factor receptors.

The researchers also observed that cell types varied greatly in the extent of their spatial patterning of gene expression. For example, connective tissue progenitor cells showed a relatively large proportion of spatially restricted gene expression. This observation suggests that subtypes of these cells behave in a position-dependent manner throughout the body.

To measure the power of spatial position on a cell type's gene transcript profile, the researchers also calculated the physical distance between cells and the angular distance of their gene expression profiles.

"For many cell types, as the physical distance between cells increased, so did the angular distance between their transcriptomes," the researchers noted in their paper. However, they added that this trend varied considerably. It was most pronounced in certain brain and spinal cord cells.

The genetic transcript profiles of some other cell types were highly influenced by their position in the developing embryo. Among these are certain cartilage cells, which become part of the scaffolding for bones of the head and face.

The researchers also studied gene expression dynamics that took place as part of brain cell differentiation and migration during mouse embryonic development. The researchers examined how various brain cell trajectories were anatomically distributed. The researchers did so by using the Allen Institute's Anatomical Reference Brain Atlas as a guide.

"Cells from each trajectory overwhelmingly occupied distinct brain regions," the researchers noted. They also observed gradients of developmental maturity in different regions of the brain. These gradients revealed both known and new patterns of migration.

In the future, the researchers hope sci-Space will be further applied to serial sections that span the entire mouse embryo and that cover many points of time.