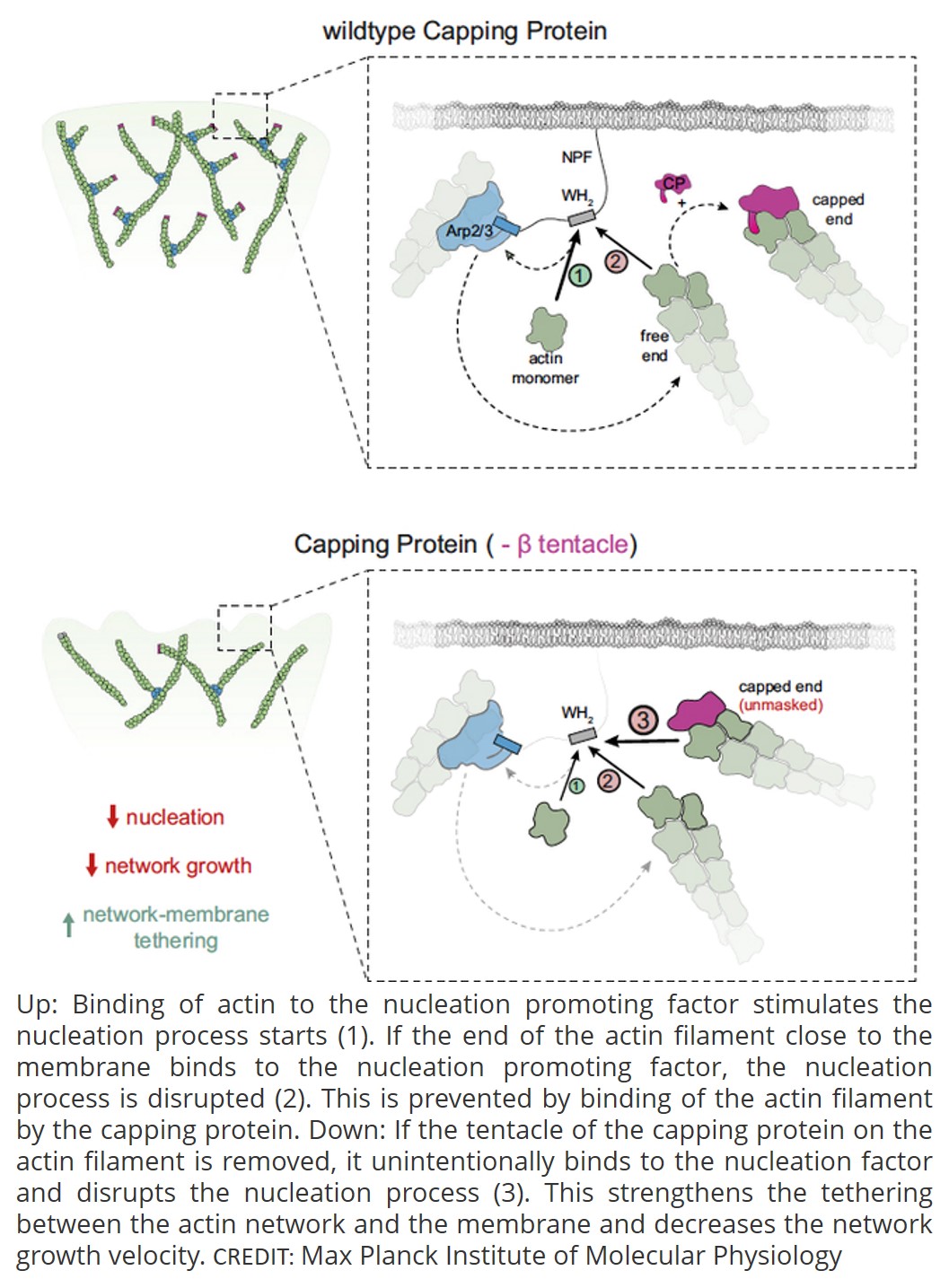 Cells are characterized to be stable yet highly flexible. They constantly modify their shape and even move through tissue. These vital properties are based on a dynamically organized network of branched actin filaments, which generates pushing forces to move the cell membrane.

An interdisciplinary team has now jointly revealed a previously unknown mechanism, explaining how stopping the growth of older actin filaments within the network promotes the formation of new ones, thereby maintaining the structure and function of the cytoskeleton, much like proper pruning of hedges in the garden.

Cells grow, divide, change their shape and move. They provide structure for the body and tissues, enter wounds to close them or chase down bacteria in our blood. The mobility of cells is a prerequisite for a variety of essential biological functions and is ensured by the cytoskeleton. This dynamic protein network assembles on the inside of the cell membrane and is responsible for the cell’s shape, its mechanical stability and it’s ability to move.

One key component of the cytoskeleton is actin, which can self-assemble into filaments. But where does the pushing force of the cytoskeleton actually originate from? The origin lies in a nucleation process that occurs just beneath the cell membrane. Nucleation of new actin filaments is initiated by a protein complex called Arp2/3, which is activated by membrane-bound nucleation promoting factors (NPF). The Apr2/3 forms the initial seed of a new filament and connects this seed to the side of older filaments. After the initial formation of this actin seed, further actin monomers attach and construct a filament, which grows against the membrane. This growth process generates the pushing force. The resulting structure of the actin network looks like a tree or a hedge, with many connected branches of actin filaments.

To ensure optimal power transmission to the plasma membrane, the branched actin network requires continuous maintenance. A key player in this process is the capping protein. Its main task is to stop the elongation of filaments before they become too long and to prevent the non-productive elongation of filaments that grow away from the cell membrane. Capping actin filaments thus has a similar effect to trimming a hedge: it keeps the (actin) hedge neat and tidy, much like proper pruning However, it also stimulates the budding production (actin branching) near the plant’s edges (membrane) through the Arp2/3 complex. The precise mechanism involved in how the capping protein controls the speed by which Arp2/3 forms new filaments was not previously understood.

A high-resolution structure of the capping protein bound to an actin filament-end produced by co-first author using electron cryo-microscopy revealed that the capping protein does much more than previously assumed. It not only stops filament growth, but also blocks the end from interacting with other proteins. Most importantly, it blocks the binding of nucleation promoting factors (the Arp2/3 activators) via a tiny “tentacle” extension. The other co-first author of the study, was able to show, that removing this tentacle did not prevent the capping protein from stopping filament growth, but drastically inhibited the network assembly and the efficiency of lamellipodial protrusion required for cell movement when working together with all other proteins required to build branched networks.

“Studying the role of the capping protein from many different angles has uncovered details about how the core proteins that build branched actin networks  do not act as separate players as previously thought, but really as a functional unit. We hope, that our findings will contribute to a better understanding of cell movement of both healthy as well as diseased cells in the future,” says the senior author.