How SARS-CoV-2 hijacks the cells by modifying the proteins 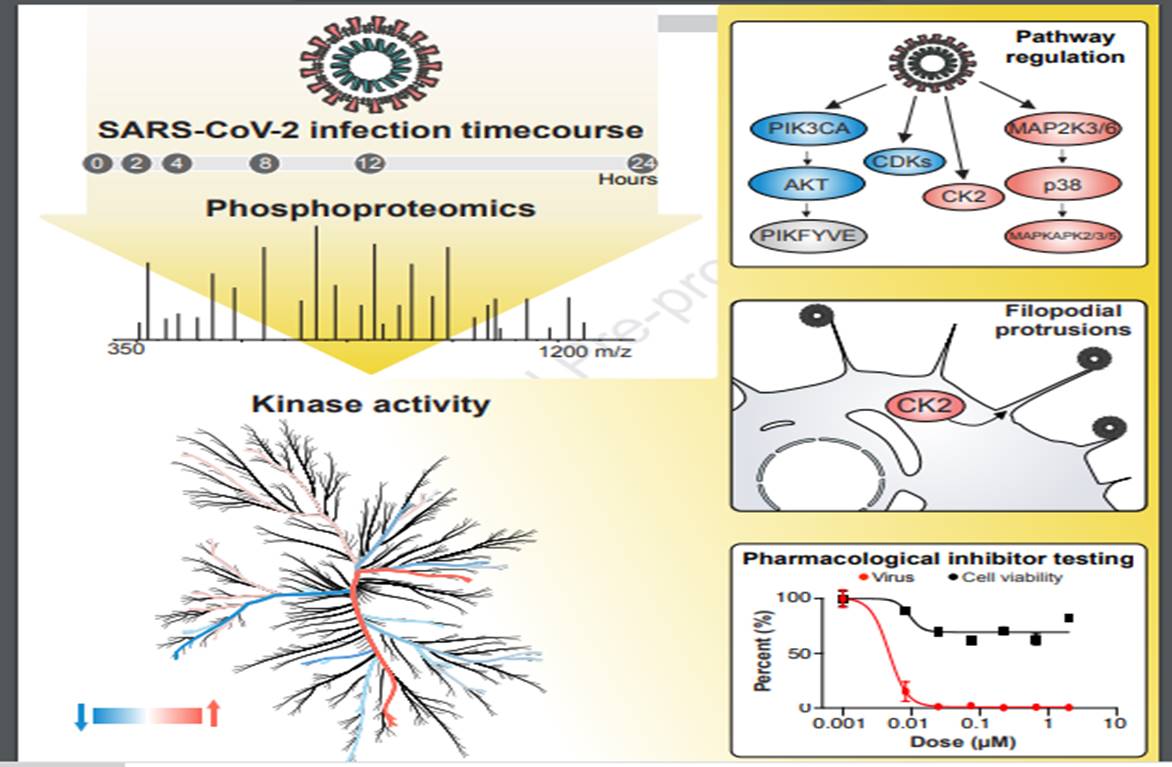 An international team of researchers has analysed how SARS-CoV-2, the virus that causes COVID-19, hijacks the proteins in its target cells. The research, published in the journal Cell, shows how the virus shifts the cell's activity to promote its own replication and to infect nearby cells. The scientists also identified seven clinically approved drugs that could disrupt these mechanisms, and recommend that these drugs are immediately tested in clinical trials.

Viruses are unable to replicate and spread on their own: they need an organism - their host - to carry, replicate, and transmit them to further hosts. To facilitate this process, viruses need to take control of their host cell's machinery and manipulate it to produce new viral particles. Sometimes, this hijacking interferes with the activity of the host's enzymes and other proteins.

Once a protein is produced, enzymes can change its activity by making chemical modifications to its structure. For example, phosphorylation - the addition of a phosphoryl group to a protein by a type of enzyme called a kinase - plays a pivotal role in the regulation of many cell processes, including cell-to-cell communication, cell growth, and cell death. By altering phosphorylation patterns in the host's proteins, a virus can potentially promote its own transmission to other cells and, eventually, other hosts.

The scientists used mass spectrometry, a tool to analyse the properties of a sample by measuring the mass of its molecules and molecular fragments, to evaluate all host and viral proteins that showed changes in phosphorylation after SARS-CoV-2 infection. They found that 12% of the host proteins that interact with the virus were modified. The researchers also identified the kinases that are most likely to regulate these modifications. Kinases are potential targets for drugs to stop the activity of the virus and treat COVID-19.

SARS-CoV-2 not only impacts cell division, but also cell shape. One of the key findings from the study is that infected cells exhibit long, branched, arm-like extensions, or filopodia. These structures may help the virus reach nearby cells in the body and advance the infection, but further study is warranted.

"The distinct visualisation of the extensive branching of the filopodia once again elucidates how understanding the biology of virus-host interaction can illuminate possible points of intervention in the disease," says the author.

"Kinases possess certain structural features that make them good drug targets. Drugs have already been developed to target some of the kinases we identified, so we urge clinical researchers to test the antiviral effects of these drugs in their trials," says the author.

In some patients, COVID-19 causes an overreaction of the immune system, leading to inflammation. An ideal treatment would relieve these exaggerated inflammatory symptoms while stopping the replication of the virus. Existing drugs targeting the activity of kinases may be the solution to both problems.

The researchers identified dozens of drugs approved by the Food and Drug Administration (FDA) or ongoing clinical trials that target the kinases of interest. Seven of these compounds, primarily anticancer and inflammatory disease compounds, demonstrated potent antiviral activity in laboratory experiments.