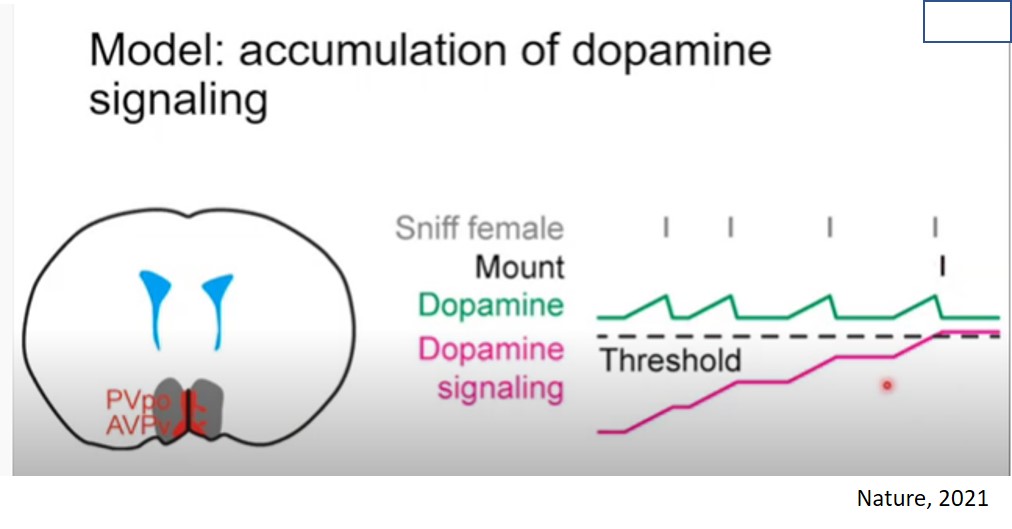 A structure located at the base of the brain, the hypothalamus, orchestrates motivational states including hunger, thirst, and the motivation to mate. In a study published in the journal Nature, researchers uncovered the precise hypothalamic neurons that regulate the drive to engage in mating behaviors in mice. By identifying the molecular mechanism that sustains this motivational drive for many tens of minutes, the findings suggest a general principle about the neurobiology of motivation. The study also sets the stage for developing a targeted therapy to offset the sexual side effects linked to antidepressants that can discourage patients from treating mental illnesses.

“Brief investigation of females primes a male’s interest to mate for tens of minutes, while a single successful mating triggers satiety that gradually recovers over days,” said corresponding author. “The neurotransmitter dopamine is typically studied in reward-related brain circuits. For decades, dopamine was also known to act on mating-related brain regions. However, the exact neuronal source of this dopamine remained unknown. Our study explains how dopamine translates a brief 30-second exposure to a female mouse into sustained changes in the male mouse's brain.”

Building on researchers previous investigations into the brain circuitry that governs hunger and thirst, the team found that mating drive is controlled by specialized dopamine-releasing neurons in the hypothalamus. During investigations of females, dopamine release leads to sustained biochemical signaling in the mating circuit that underlies the persistent increase in the motivation to mate. The authors further showed that artificially stimulating or silencing these dopamine-releasing neurons could powerfully increase or decrease the drive to mate.

Using optical and molecular methods for tracking and manipulating intracellular signalling, they show that this priming effect emerges from the accumulation of mating-related dopamine signals in the MPOA through the accrual of cyclic adenosine monophosphate levels and protein kinase A activity.

“Our study provides a foundation for addressing important questions, such as: How do these neurons control the gradual recovery from satiety across days, and how might they control mating drive in females?” said first author. “Further, our findings may help explain how mating drive is altered by certain medications such as selective serotonin reuptake inhibitors (SSRIs).”

The researchers propose that elevated serotonin may act as a brake on dopamine signaling in mating-related circuits, thereby decreasing libido – a side effect that nearly 75 percent of patients taking SSRIs experience. The scientists suggest that future therapies could target the newly identified dopamine-releasing neurons that regulate the drive to mate to alleviate the problem, thereby eliminating a major reason patients discontinue taking antidepressant medications.