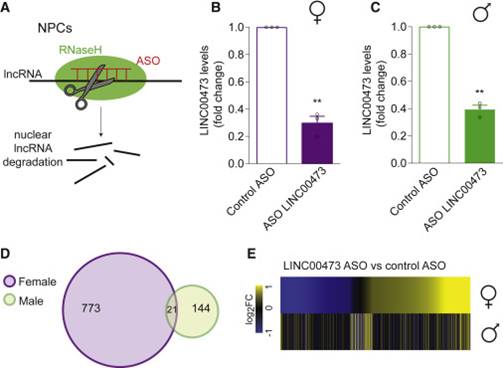 Researchers have found that a novel class of genes known as long non-coding RNAs (lncRNAs) expressed in the brain may play a pivotal role in regulating mood and driving sex-specific susceptibility versus resilience to depression. In a study published, in the journal Neuron, the team highlighted a specific gene, LINC00473, that is downregulated in the cerebral cortex of women only, shedding light on why depression affects females at twice the rate of men.

“Our study provides evidence of an important new family of molecular targets that could help scientists better understand the complex mechanisms leading to depression, particularly in women,” says the lead author of the study. “These findings into the biological basis of depression could promote the development of more effective pharmacotherapies to address a disease that’s the leading cause of disability worldwide.”

Past research has shown that about 35 percent of the risk for depression in both sexes can be traced to genetic factors, and the remainder to environmental factors, primarily stress exposure. Long non-coding RNAs fall into a third category: epigenetic factors, which are biological processes that lead to changes in gene expression not caused by changes in the genes themselves. While research focusing on the role of lncRNAs in mood and depression is in its infancy, the researchers pushed the boundaries of the science by showing the robust regulation of this class of molecules linked to depression in a brain-region and sex-specific manner.

“Our work suggests that the complex primate brain especially uses lncRNAs to facilitate regulation of higher brain function, including mood,” explains the author, “and that malfunction of these processes can contribute to pathologies like depression and anxiety in a sex-specific manner.” Researchers found, for example, that the LINC00473 gene is a female-specific driver of stress resilience that is impaired in female depression. They also learned it is a key regulator of mood in females, in whom it acts on the prefrontal cortex of the brain by regulating gene expression, neurophysiology, and behavior.

To evaluate the contribution of lncRNAs to depression, the team screened thousands of candidate molecules, and using advanced bioinformatics narrowed the field to LINC00473. Through viral-mediated gene transfer, researchers expressed LINC00473 in adult mouse neurons, and showed that it induced stress resilience solely in female mice. They found that this sex-specific phenotype was accompanied by changes in synaptic function and gene expression selectively in female mice. That discovery, along with studies of human neuron-like cells in culture, led to selection of LINC00473 as the lead candidate. Other genes considered strong candidates are also being actively investigated.

“Our study opens the window to a whole new class of molecular targets that could help explain the mechanisms governing depression susceptibility and resilience, particularly in females,” says corresponding author. “Long non-coding RNAs could guide us toward better, more effective ways to treat depression and, just as importantly, to diagnose this debilitating condition. Much work remains, but we’ve provided a very promising roadmap to follow moving forward.” This is an error that has been elevated to critical error status because it occurred during the primary error mechanism reporting system itself (possibly due to it occuring within the standard output framework). It may be masking a secondary error that occurred before this, but was never output - if so, it is likely strongly related to this one, thus fixing this will fix the other.
Unfortunately a query has failed [DELETE FROM ocp_stats WHERE date_and_time<1607780821] [Table 'ocpo1.ocp_stats' doesn't exist] (version: 9.0.20, PHP version: 5.6.40, URL: /site/index.php?page=news&type=view&id=biochemistry%2Fincreased-susceptibility)