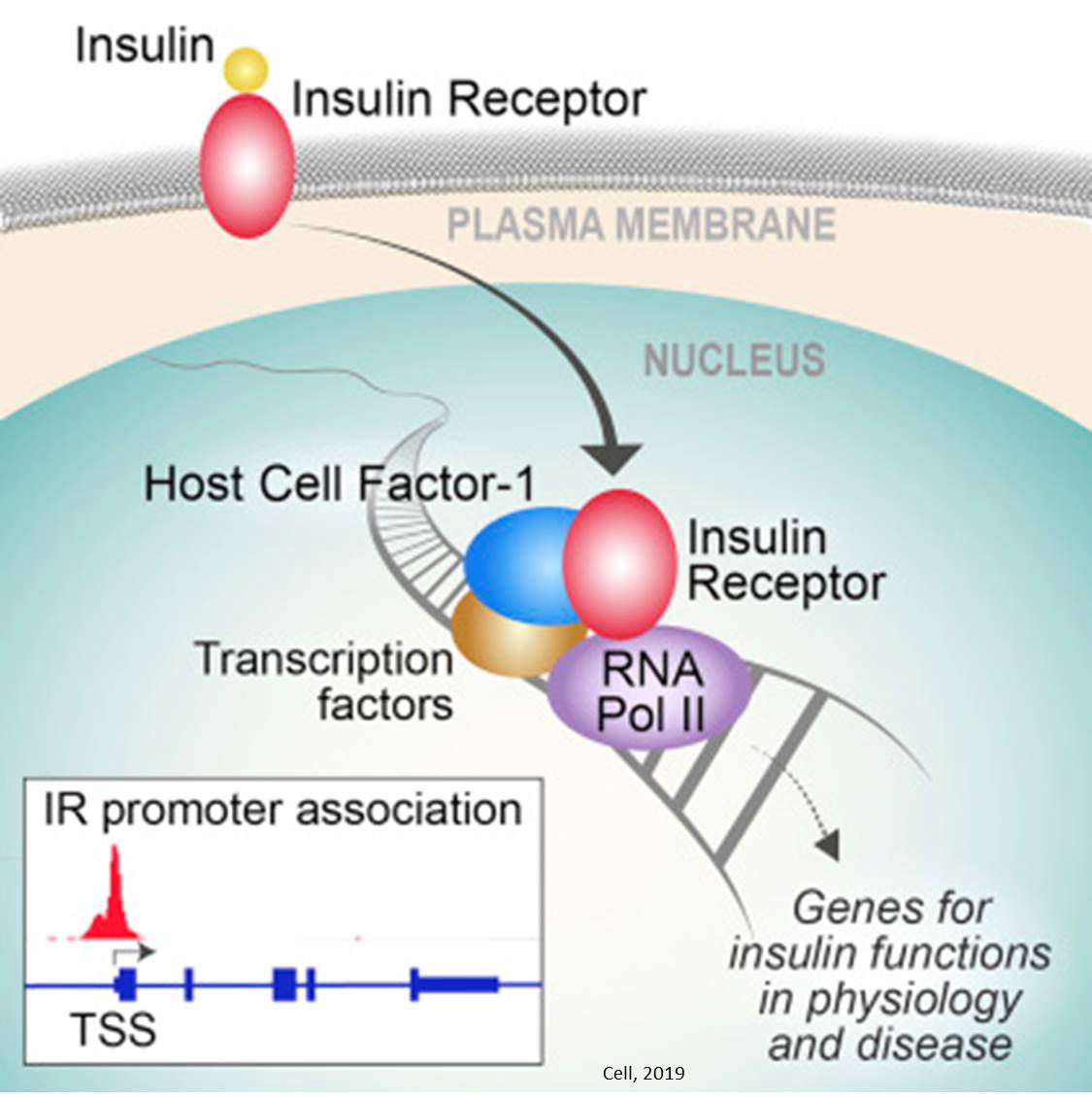 Researchers have made key new insights into the molecular behavior of insulin. Reporting in Cell, they describe an unexpected mechanism by which insulin triggers changes to the expression of thousands of genes throughout the genome.

Their analyses show that the insulin receptor--a protein complex at the cell surface--physically transports to the cell nucleus after it detects and binds insulin. Once there, it helps initiate the expression of genes involved in insulin-related functions and diseases. This process was impaired in mice with insulin resistance.

The results outline a set of potential therapeutic targets for insulin-related diseases and establish a wide range of future avenues of research on insulin signaling, including potential clues toward the underlying biological mechanisms that differentiate type 1 and type 2 diabetes.

"Our findings open the door for a new field of study on the insulin receptor, a remarkable protein complex expressed in almost all cells and implicated in major chronic diseases that affect hundreds of millions of people," said senior study author.

Dysfunctions in insulin signaling give rise to a number of serious chronic diseases. In type 1 diabetes, pancreatic cells fail to produce enough insulin, and in type 2 diabetes--the far more common form of the condition--cells become resistant to insulin. Without proper insulin signaling, glucose accumulates in the blood where it damages tissues and organs. Insulin resistance has also been implicated in neurodegenerative diseases such as Alzheimer's and Parkinson's, and excessive insulin signaling contributes to a variety of cancers.

Researchers were broadly interested in studying how cell surface receptors communicate with the interior of a cell and performed screens to identify proteins associated with the insulin receptor.

Their experiments suggested that one of the most prominent such proteins is RNA polymerase, an enzyme responsible for transcribing DNA into RNA--the first step in gene expression.

This was unexpected, said the senior author, because RNA polymerase functions inside the nucleus of a cell--far away from surface of the cell where the insulin receptor is located. Additional analyses revealed an unexpected explanation.

The team found that after the insulin receptor binds insulin, it is physically transported from the cell surface to the nucleus via a yet unidentified mechanism. Once there, it binds to RNA polymerase on chromatin--the protein-DNA complex that cells use to store their genomes.

A genome-wide search revealed around 4,000 genomic regions where the insulin receptor bound with a degree of specificity that essentially makes random chance impossible. The striking majority of these sites were at promoters--sequences of DNA that initiate the expression of genes.

A high proportion of the targeted genes were involved in insulin-related functions, particularly the synthesis and storage of lipids and proteins. Certain subsets of genes appeared to be unique to different tissue types. The analyses also identified numerous disease-related genes, including ones linked with diabetes, cancer and neurodegeneration.

Counterintuitively, the researchers found the insulin receptor does not specifically target genes involved in carbohydrate metabolism--one of the primary functions of insulin signaling.

This was an intriguing result for many reasons, the senior author said, especially because of the observed differences between the two major forms of diabetes. Both types involve problems with carbohydrate synthesis and storage. However, if left untreated, patients with type 1 diabetes lose weight, while type 2 diabetes is associated with obesity.

"The excessive lipid storage seen in type 2 diabetes compared with type 1 is a bit of a paradox because disrupted insulin signaling should cause issues with both lipid synthesis and storage in either condition," the author said.

"The finding that genes downstream of the pathway we identified are involved in lipid metabolism but not carbohydrate metabolism potentially gives us a window into that differential effect between carbohydrate and lipid," the senior author said. "But we won't know until we perform further experiments."

The researchers made a number of other insights on how the insulin receptor regulates genes.

They identified several additional proteins that play a role in this process. One of particular interest was HCF-1 (host cell factor-1), which is expressed in all cells and is involved in regulating cell cycle and growth. It appears to play a critical role in recruiting the insulin receptor and other proteins to the location of a promotor to initiate gene activation.

While the insulin receptor has been studied intensely for decades, these findings represent a new pathway for insulin signaling function and shed light on potential mechanisms for the long-term effects of insulin in the body.

Intriguingly, as far back as the 1970s, scientists had clues that the insulin receptor and other members of the same class of cell surface receptors, known as receptor tyrosine kinases, can be found within the cell nucleus. These observations remained poorly understood, and the process behind them never fully described.

The identification of this pathway opens new avenues of investigation into the insulin receptor and other members of the same receptor family, which function as key "on" or "off" switches for a wide range of important cellular processes.

"We were surprised to find such strong evidence that the entire insulin receptor complex moves to the nucleus, and we were initially very skeptical," the senior author said. "We still don't know how exactly this happens, but we've pinned down the details of much of this process on a genome-wide scale."

"A better understanding will help us improve our knowledge of the biology of insulin signaling in health and in disease, as well as other receptor tyrosine kinases, which are attractive targets for drug therapies due to their involvement in such a broad range of diseases," the senior author added.