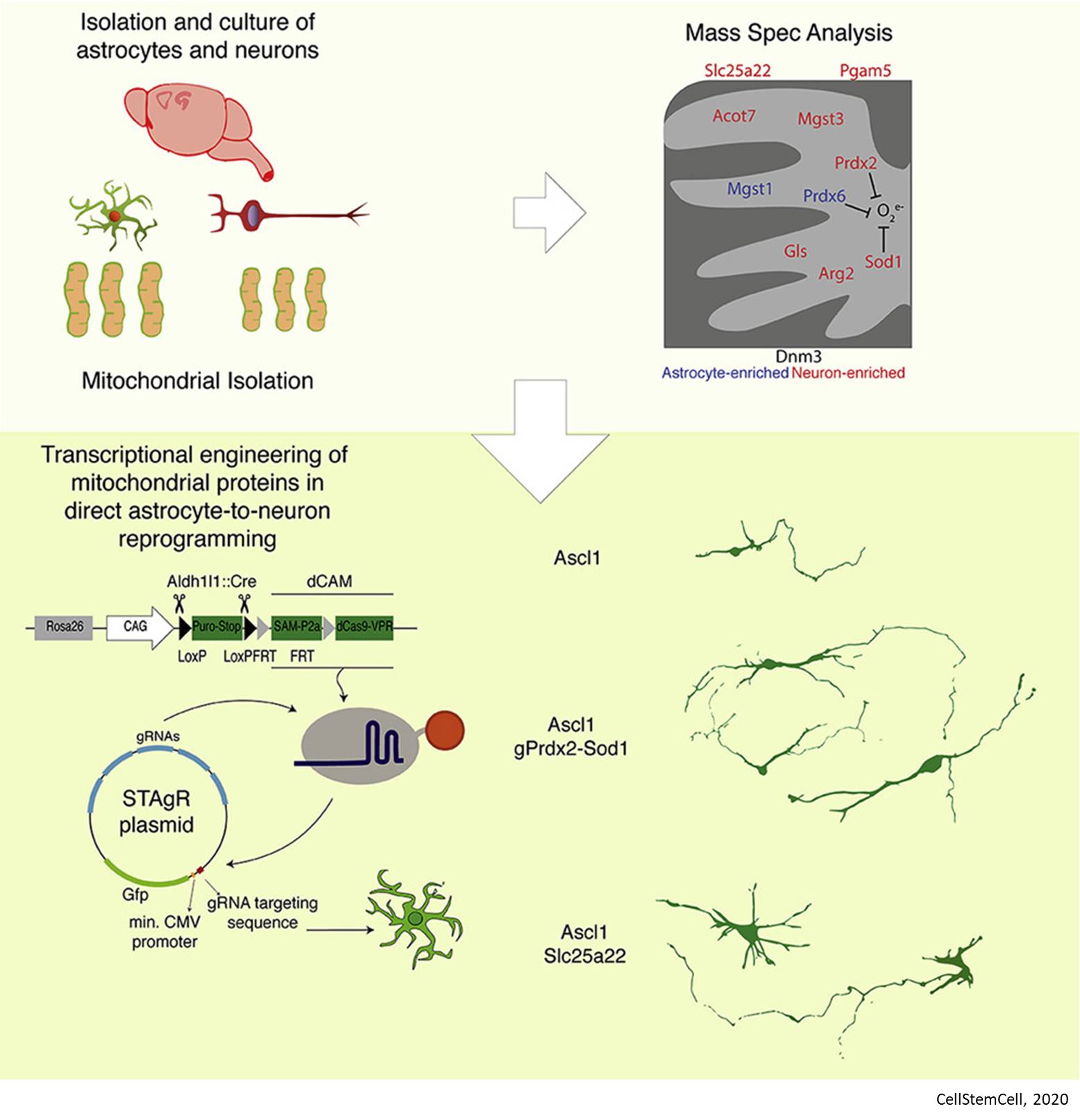 The replacement of lost neurons is a holy grail for neuroscience. A new promising approach is the conversion of glial cells into new neurons. Improving the efficiency of this conversion or reprogramming after brain injury is an important step towards developing reliable regenerative medicine therapies. Researchers have identified a hurdle towards an efficient conversion: the cell metabolism. By expressing neuron-enriched mitochondrial proteins at an early stage of the direct reprogramming process, the researchers achieved a four times higher conversion rate and simultaneously increased the speed of reprogramming.

Neurons (nerve cells) have very important functions in the brain such as information processing. Many brain diseases, injuries and neurodegenerative processes, are characterized by the loss of neurons that are not replaced. Approaches in regenerative medicine therefore aim to reconstitute the neurons by transplantation, stem cell differentiation or direct conversion of endogenous non-neuronal cell types into functional neurons.

Researchers are pioneering the field of direct conversion of glial cells into neurons which they have originally discovered. Glia are the most abundant cell type in the brain and can proliferate upon injury. Currently, researchers are able to convert glia cells into neurons - but during the process many cells die. This means that only few glial cells convert into functional nerve cells, making the process inefficient.

The team investigated potential hurdles in the conversion process and took a new route: While most studies have focused on the genetic aspects of direct neuronal reprogramming, they decided to study the role of mitochondria and cell metabolism in this process. This was inspired by their previous work showing that cells die due to excessive reactive oxygen species in the conversion process.

"We hypothesized that if we were able to help reprogramming the metabolism of glia cells towards the metabolism of a neuron, this could improve the conversion efficiency", explains the first-author of the study. Given their previous data, the researchers focused on mitochondria, the cell's powerhouse. The group extracted mitochondria from neurons and astrocytes (a specific type of glia cell) of mice and compared them by studying their proteins. Surprisingly, they found that mitochondria of neurons and astrocytes differ in 20 percent of their proteome. This means that between astrocytes and neurons every fifth mitochondrial protein is different.

To overcome this hurdle, the group employed CRISPR/Cas9 technology in the study. With new gene activation tools developed by this group, neuron-enriched mitochondrial proteins could be activated at an early stage of the reprogramming process of astrocytes to neurons. By manipulating one to two mitochondrial proteins only, the researchers gained four times more reprogrammed neurons. On top of that, the neurons appeared and matured faster, as revealed by continuous live imaging.

"I was amazed that changing the expression of few mitochondrial proteins actually drives the speed of reprogramming", says the lead author of the study. "This shows how important the cell-type-specific differences of mitochondrial proteins are. And indeed, together with our proteome experts, we are discovering further organellar differences between cell types that reach up to 70 percent. This will pave the way to further improve the reprogrammed neurons to resemble as much as possible endogenous neurons also after brain injury in vivo."