Microproteins from ncRNAs and circRNAs produced in human heart 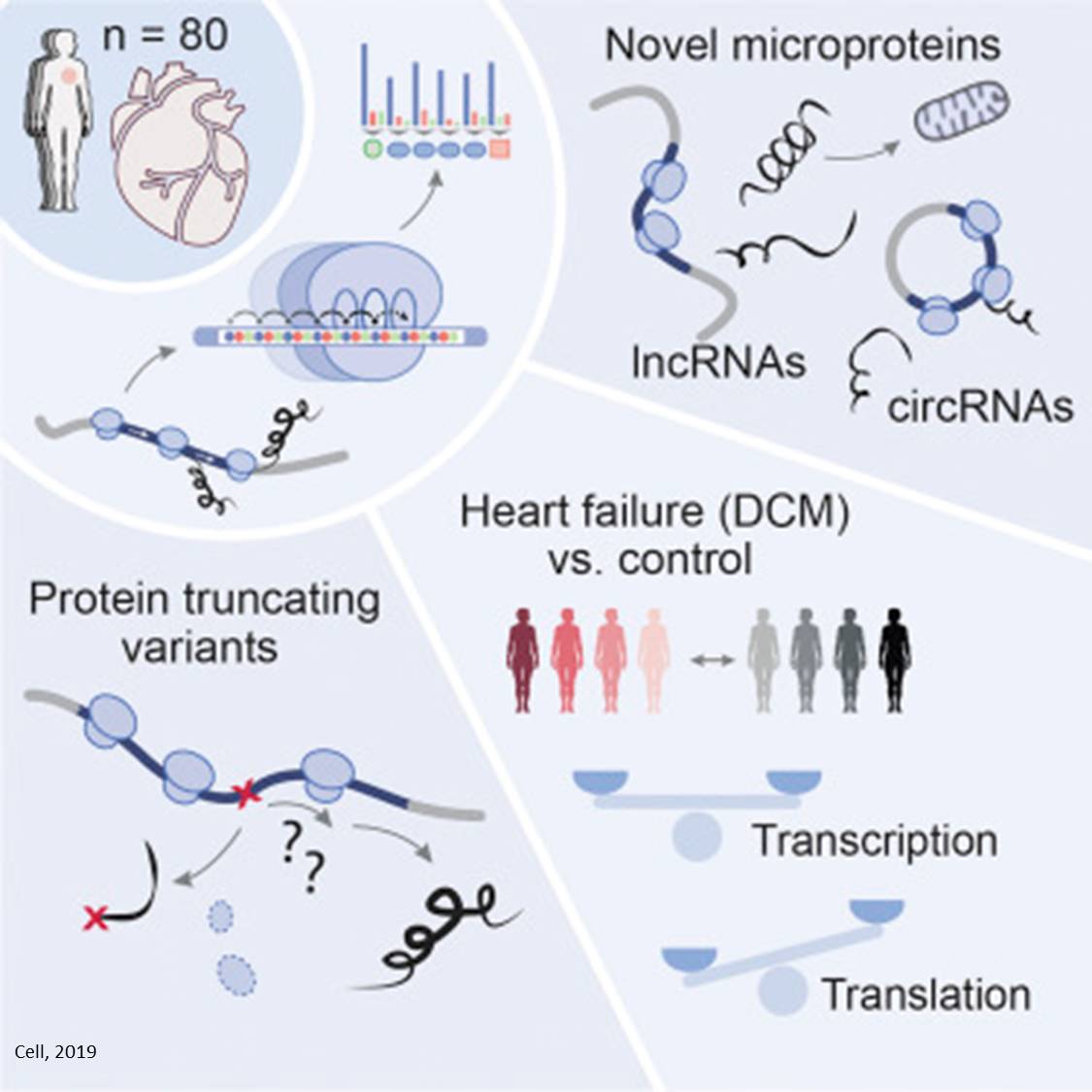 A research group has observed the human heart cells' "protein factories" in action, examining the entire tissue for the very first time. In an article published in Cell, the group reveals their surprising discoveries and the possibilities they contain for the future treatment of heart disease.

An international team of 56 researchers examined the proteins produced by the ribosomes - our bodies' cellular protein factories - in the heart cells of both healthy people and those suffering from heart disease. The results were surprising, and included the discovery of a large number of mini-proteins that were previously entirely unknown.

The DNA stored in the nucleus of every cell contains a blueprint for all proteins produced in the body. The production of protein is a two-step process: transcription and translation. In the first step, copies of DNA fragments are produced in the form of messenger RNAs (mRNAs), which then leave the cell nucleus. In the second step, ribosomes use individual amino acids swimming around in the cell to create the corresponding proteins. While there has been quite a lot of scientific research into transcription, comparatively little is known about the translation process.

"With the help of a relatively new technique known as ribosome profiling, or Ribo-Seq, we have now been able to determine for the first time not only in isolated cells, but also in intact human heart tissue, which mRNA sites the ribosomes migrate to," explains the lead author of the study. "Using special algorithms, we were then able to calculate which proteins are produced in the heart during translation."

Using this technique, the researchers discovered a whole series of tiny, previously unknown proteins. Another surprising discovery made by the team was that many of the microproteins were encoded by RNAs that were not believed to have encoding properties - i.e., not thought to contain instructions for building proteins.

Using special microscopic techniques, the scientists were then able to observe that, once produced, more than half of these microproteins migrate to the mitochondria - the energy powerhouses of our cells. "This means that they are obviously used in the heart's energy production processes," says the author. "Since many heart diseases are caused by a faulty energy metabolism, we were particularly interested in this result."

In order to detect possible differences between the translatome (totality of proteins formed) of diseased and healthy hearts, the scientists examined tissue samples from 65 patients with dilated cardiomyopathy (DCM) - a condition in which the heart muscle becomes enlarged. The samples were taken from the patients by biopsy during scheduled heart operations. The tissue of 15 healthy hearts was used for comparison.

DCM, which requires many patients to undergo a heart transplant at some point in their lives, is caused by a mutation in the titin gene - the largest and most important protein of the human heart. "As a result of this genetic mutation, a stop signal is generated in the mRNA that tells the ribosomes to finish their work before the titin has been completed," explains the senior author. However, not all people who carry this mutation in their DNA will actually develop DCM.

The researchers are now investigating the reasons behind their discoveries. "We have observed that ribosomes can sometimes simply ignore this stop signal and continue undeterred with titin production," says the researcher. The goal now is to find out the circumstances under which this occurs.

They also hopes to more closely investigate the role of the newly discovered microproteins. "These proteins seem to be evolutionarily quite young," the author says. "We could not find them in mouse hearts, for example." The substances thus offer further evidence of just how special the human heart is.