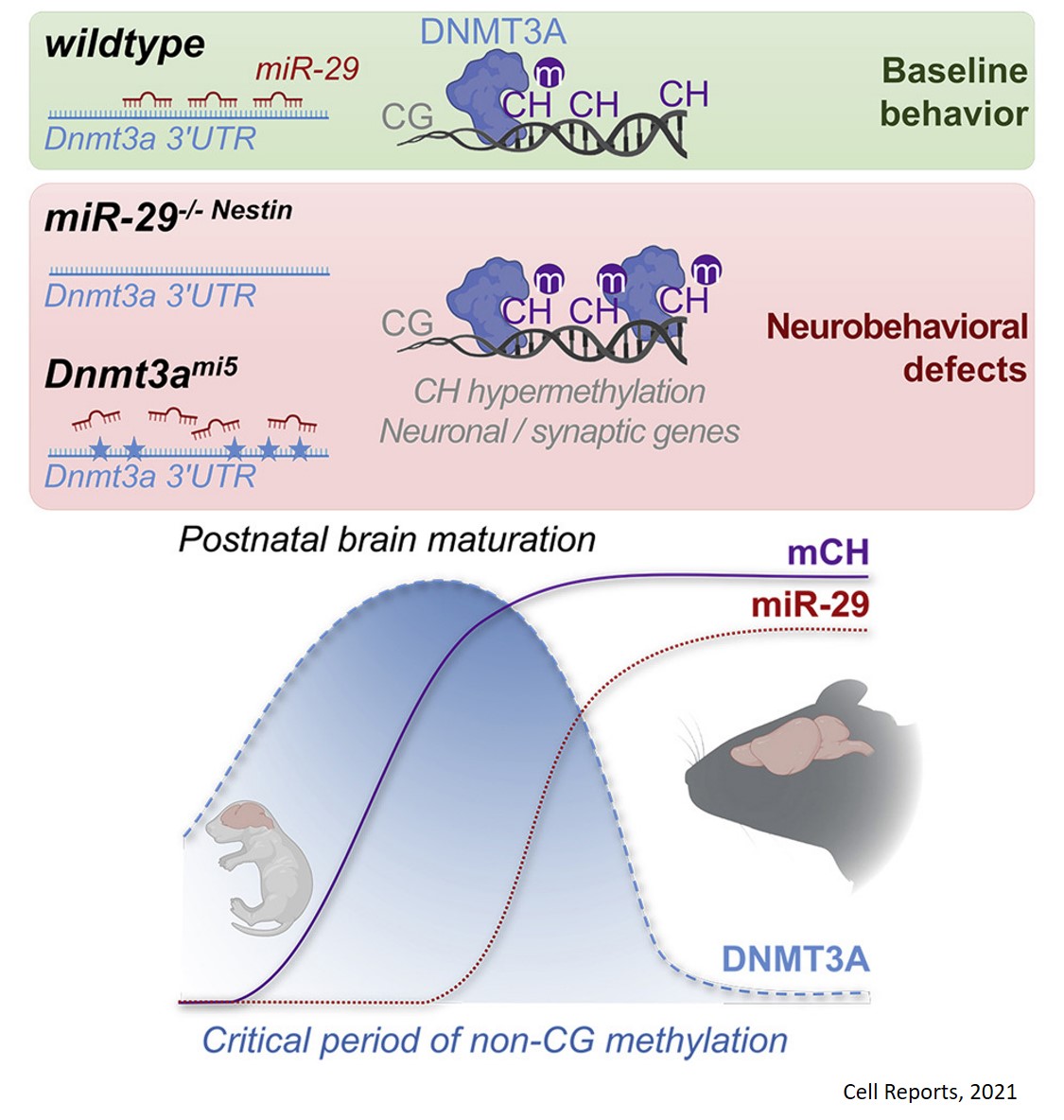 A research team identified a molecule called microRNA-29 as a powerful controller of brain maturation in mammals. Deleting microRNA-29 in mice caused problems very similar to those seen in autism, epilepsy, and other neurodevelopmental conditions.

The results, published in Cell Reports, illuminate an important process in the normal maturation of the brain and point to the possibility that disrupting this process could contribute to multiple human brain diseases.

"We think abnormalities in microRNA-29 activity are likely to be a common theme in neurodevelopmental disorders and even in ordinary behavioral differences in individuals," said senior author. "Our work suggests that boosting levels of miR-29, perhaps even by delivering it directly, could lead to a therapeutic strategy for neurodevelopmental disorders such as autism."

MicroRNAs are short stretches of ribonucleic acid inside cells that regulate gene expression. Each microRNA, or miR, can bind directly to an RNA transcript from certain other genes, preventing it from being translated into a protein. MiRNAs thus effectively serve as inhibitors of gene activity, and the typical microRNA regulates multiple genes in this way so that genetic information is not overexpressed. These essential regulators have been intensively researched only in the past two decades. Therefore, much remains to be discovered about their roles in health and disease.

The researchers examined a mouse model in which the genes for the miR-29 family were deleted just in the brain. They observed that although the mice were born normally, they soon developed a mix of problems, including repetitive behaviors, hyperactivity, and other abnormalities typically seen in mouse models of autism and other neurodevelopmental disorders. Many developed severe epileptic seizures.'

To get a sense of what caused these abnormalities, the researchers examined gene activity in the brains of the mice, comparing it to activity in mouse brains that had miR-29. As expected, many genes were much more active when miR-29 was no longer there to block their activity. But the scientists unexpectedly found a large set of genes - associated with brain cells - that were less active in miR-29's absence.

The researchers eventually found the explanation for this mysterious reduction in gene activity.

One of the target genes that miR-29 normally blocks is a gene that encodes for an enzyme called DNMT3A. This enzyme places special chemical modifications called CH-methylations onto DNA, to silence genes in the vicinity. In mice brains, the activity of the gene for DNMT3A normally rises at birth and then sharply declines several weeks later. The scientists found that miR-29, which blocks DNMT3A, is what normally forces this sharp decline.

Thus, in the mice whose brains lack miR-29, DNMT3A is not suppressed and the CH-methylation process continues abnormally - and many brain cell genes that should become active continue to be suppressed instead. Some of these genes, and the gene for DNMT3A itself, have been found to be missing or mutated in individuals with neurodevelopmental disorders such as autism, epilepsy, and schizophrenia.

To confirm DNMT3A's role, the scientists created a unique mouse model that prevents miR-29 from suppressing DNMT3A, but leaves miR-29's other targets untouched. They showed that this unleashing of DNMT3A on its own results in many of the same problems such as seizures and early death, as seen in the mice without miR-29.

The findings highlight and clarify what seems likely to be a crucial process in shaping the brain late in its development: the switching-off of DNMT3A to free up many genes that are meant to be more active in the adult brain.

"These results are the first to identify miR-29 as an essential regulator of CH methylation, and to show why restricting CH methylation to a critical period is important for normal brain maturation," the senior author said.

The authors are now following up by studying in more detail how the lack of miR-29 in different sets of brain cells might give rise to such disorders, and more generally they are studying how miR-29's activity is regulated in childhood to fine-tune brain functions, thereby giving humans the traits that make them unique individuals.