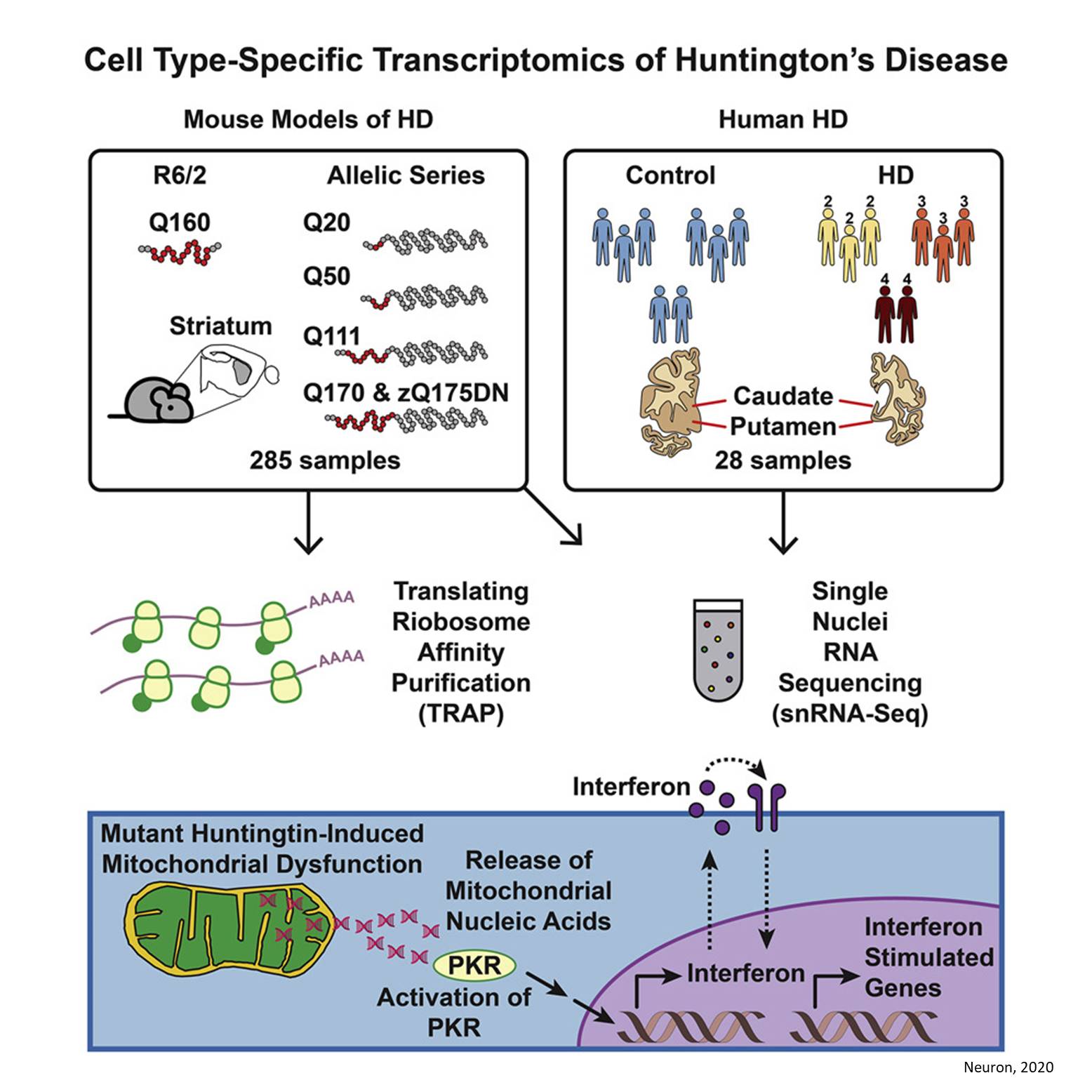 In the first study to comprehensively track how different types of brain cells respond to the mutation that causes Huntington's disease (HD), neuroscientists found that a significant cause of death for an especially afflicted kind of neuron may be an immune response to genetic material errantly released by mitochondria, the cellular components that provide cells with energy.

In different cell types at different stages of disease progression, the researchers measured how levels of RNA differed from normal in brain samples from people who died with Huntington's disease and in mice engineered with various degrees of the genetic mutation. Among several novel observations in both species, one that particularly stood out is that RNA from mitochondria were misplaced within the brain cells, called spiny projection neurons (SPNs), that are ravaged in the disease, contributing to its fatal neurological symptoms. The scientists observed that these stray RNAs, which look different to cells than RNA derived from the cell nucleus, triggered a problematic immune reaction.

"When these RNAs are released from the mitochondria, to the cell they can look just like viral RNAs and this triggers innate immunity and can lead to cell death," said study senior author,  "We believe this to be part of the pathway that triggers inflammatory signaling which has been seen in HD before."

The team's two different screening methods, "TRAP," which can be used in mice, and single nucleus RNA sequencing, which can also be used in mice and humans, not only picked up the presence of mitochondrial RNAs most specifically in the SPNs but also showed a deficit in the expression of genes for a process called oxidative phosphorylation that fuel-hungry neurons employ to make energy. The mouse experiments showed that this downregulation of oxidative phosphorylation and increase in mitochondrial RNA release both occurred very early in disease, before most other gene expression differences were manifest.

Moreover, the researchers found increased expression of an immune system protein called PKR, which has been shown to be a sensor of the released mitochondrial RNA. In fact, the team found that PKR was not only elevated in the neurons, but also activated and bound to mitochondrial RNAs.

The new findings appear to converge with other clinical conditions that, like Huntington's disease, lead to damage in a brain region called the striatum, the author said. In a condition called Aicardi-Goutières syndrome, the same brain region can be damaged because of a misregulated innate immune response. In addition, children with thiamine deficiency suffer mitochondrial dysfunction and a prior study has shown that mice with thiamine deficiency show PKR activation, much like Heiman's team found.

"These non-HD human disorders that are characterized by striatal cell death extend the significance of our findings by linking both the oxidative metabolism deficits and autoinflammatory activation phenomena described here directly to human striatal cell death absent the [Huntington's mutation] context," they wrote in Neuron.

Though the mitochondrial RNA release discovery was the most striking, the study produced several other potentially valuable findings.

One is that the study produced a sweeping catalog of substantial differences in gene expression, including ones related to important neural functions such as their synapse circuit connections and circadian clock function. Another, based on some of the team's analysis of their results, is that a master regulator of these alterations to gene transcription in neurons may be the retinoic acid receptor b (or "Rarb") transcription factor. The senior author said that this could be a clinically useful finding because there are drugs that can activate Rarb.

"If we can inhibit transcriptional misregulation we might be able to alter the outcome of the disease," the author speculated. "It's an important hypothesis to test."

Another more basic finding in the study is that many of the gene expression differences the researchers saw in neurons in the human brain samples matched well with the changes they saw in mouse neurons, providing additional assurance that mouse models are indeed useful for studying this disease, the author said. The question has dogged the field somewhat because mice typically don't show as much neuron death as people do.

"What we see is that actually the mouse models recapitulate the gene expression changes that are occurring in these stage HD human neurons very well," the author said. "Interestingly some of the other, non-neuronal, cell types did not show as much conservation between the human disease and mouse models, information that our team believes will be helpful to other investigators in future studies."