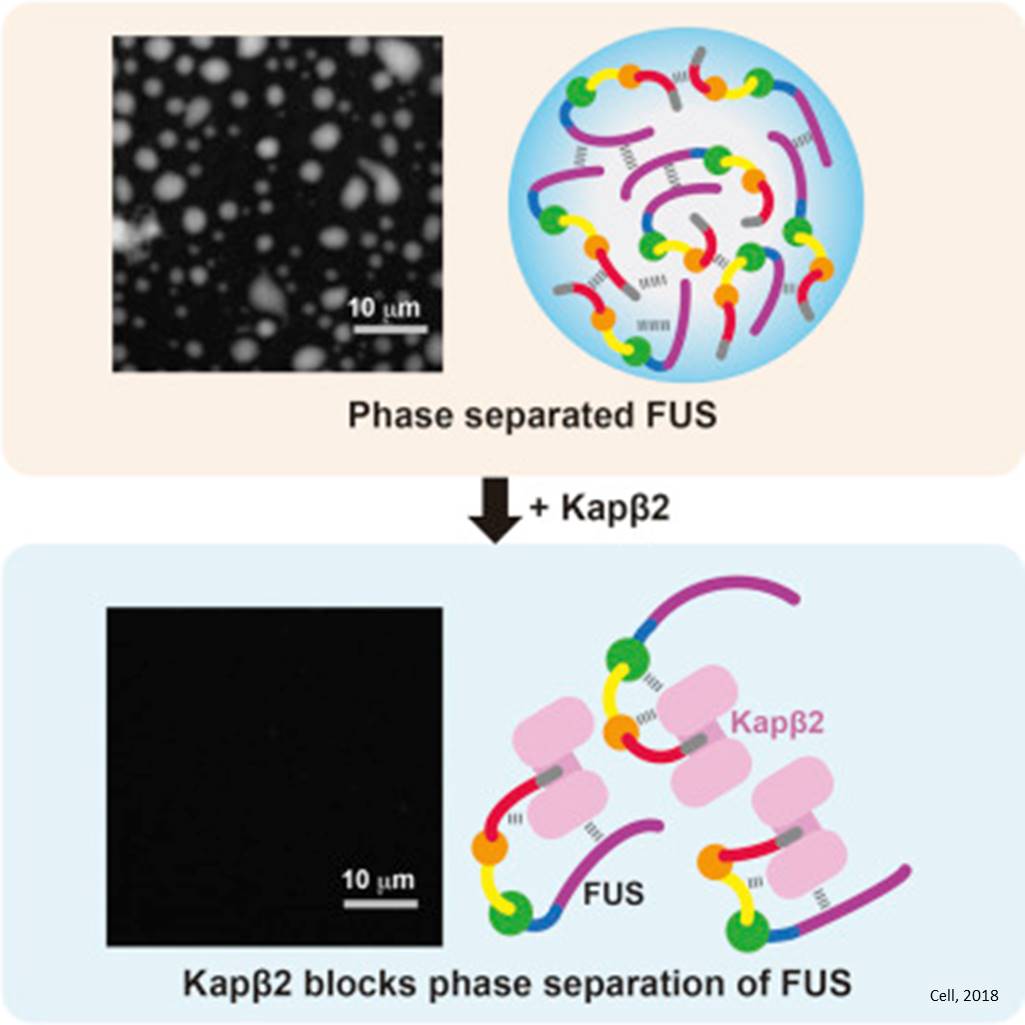 Researchers recently reported a basic science finding that might someday lead to better treatments for neurodegenerative diseases like a hereditary form of Lou Gehrig's disease.

In a study published in the journal Cell, researchers identify details in how molecules bind - or fail to bind - to each other for transport into the nucleus of nerve cells in the brain and spinal cord. Proper binding and transport appear essential for the protein named FUS (fused in sarcoma).

Normally, FUS binds to one of a class of nuclear transport receptors, in this case the importin molecule called karyopherin-β2 (Kapβ2), which transports proteins into the nucleus. Proper binding of FUS to Kapβ2 is necessary to take FUS into the nucleus, ensuring its correct cellular function. FUS that cannot be transported into the nucleus remains in the soupy cytoplasm of the cell and tends to self-associate (stick to itself) and form droplets of FUS suspended in cytoplasm that look like the droplets that form when a flask of oil and vinegar dressing is shaken.

"If you add a small amount of Kapβ2 protein to FUS proteins that have formed into droplets, within five minutes the droplets disappear. So the importin Kapβ2 is playing two roles: It is the transporter but also protects the FUS protein against phase separation and aggregation," author said.

Using nuclear magnetic resonance (NMR) spectroscopy technology, the researchers next studied exactly how the Kapβ2 importin binds to the FUS protein. They found that under normal conditions, the Kapβ2 and FUS proteins bind very strongly to each other because of interactions at the nuclear localization signal - the ZIP code-like PY-NLS that sits at one end of the long FUS protein molecule. They also found that strong binding at the PY-NLS enables weaker and very brief interactions between other parts of the importin molecule and many other regions of the FUS protein.

"Binding at the right time, in the right place, in the right way is really important. All this transient binding appears to keep the FUS protein from interacting with itself and inhibits assembly into droplets," co-senior author said. "Those droplets are probably the initial stages of the aggregates that are a hallmark of familial ALS. If we could find a way to keep the droplets from forming, perhaps we could change the course of that neurodegenerative disease."