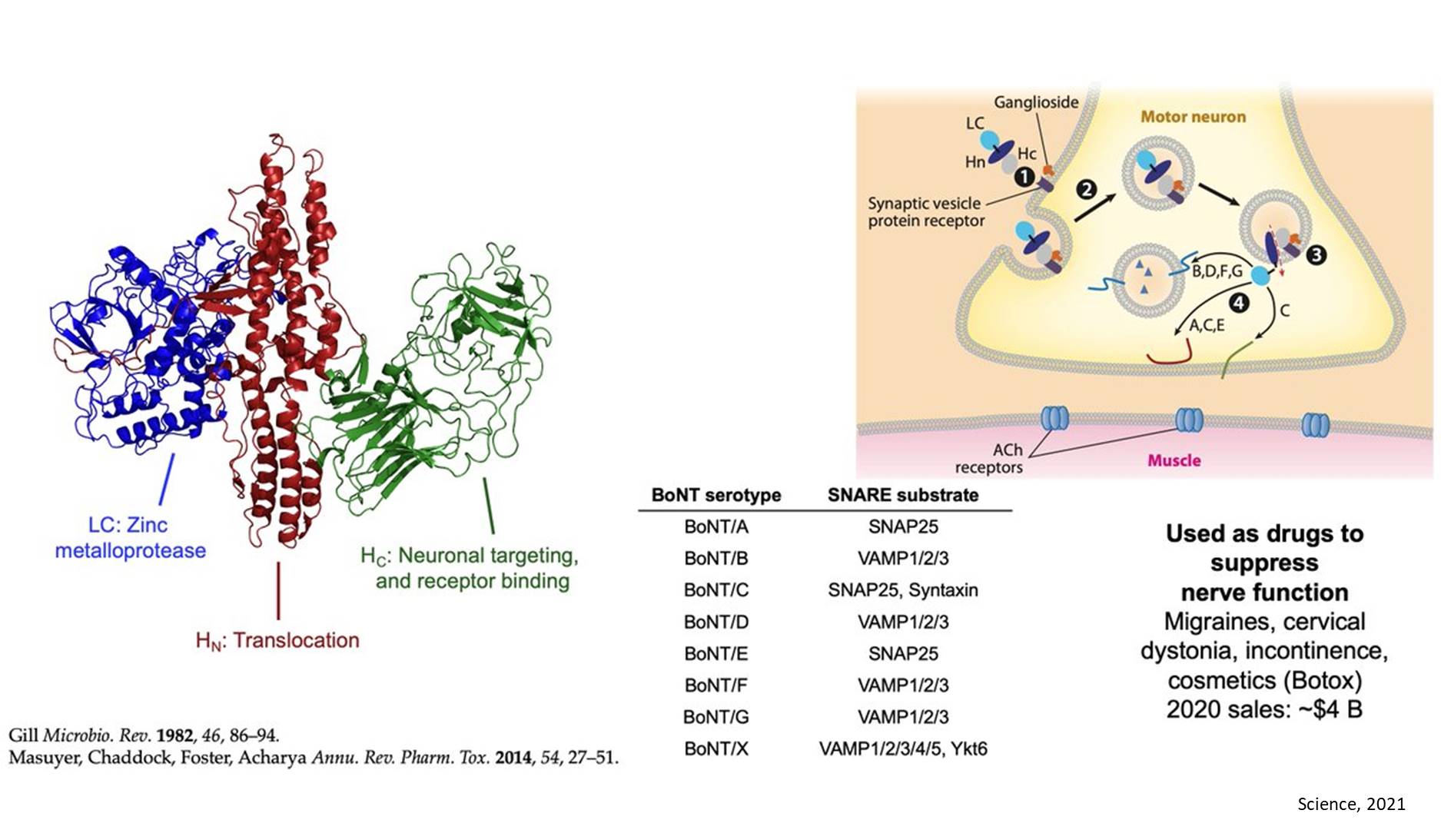 When people hear botulinum toxin, they often think one of two things: a cosmetic that makes frown lines disappear or a deadly poison.

But the "miracle poison," as it's also known, has been approved by the F.D.A. to treat a suite of maladies like chronic migraines, uncontrolled blinking, and certain muscle spasms. And now, a team of researchers for the first time, proved they could rapidly evolve the toxin in the laboratory to target a variety of different proteins, creating a suite of bespoke, super-selective proteins called proteases with the potential to aid in neuroregeneration, regulate growth hormones, calm rampant inflammation, or dampen the life-threatening immune response called cytokine storm.

"In theory, there is a really high ceiling for the number and type of conditions where you could intervene," said the first author on the study published in Science.  The team achieved two firsts: They successfully reprogrammed proteases--enzymes that cut proteins to either activate or deactivate them--to cut entirely new protein targets, even some with little or no similarity to the native targets of the starting proteases, and to simultaneously avoid engaging their original targets. They also started to address what is called a "classical challenge in biology": designing treatments that can cross into a cell. Unlike most large proteins, botulinum toxin proteases can enter neurons in large numbers, giving them a wider reach that makes them all the more appealing as potential therapeutics.

Now, the team's technology can evolve custom proteases with tailor-made instructions for which protein to cut. "Such a capability could make 'editing the proteome' feasible," said the author, "in ways that complement the recent development of technologies to edit the genome."

Current gene-editing technologies often target chronic diseases like sickle cell anemia, caused by an underlying genetic error. Correct the error, and the symptoms fade. But some acute illnesses, like neurological damage following a stroke, aren't caused by a genetic mistake. That's where protease-based therapies come in: The proteins can help boost the body's ability to heal something like nerve damage through a temporary or even one-time treatment.

Scientists have been eager to use proteases to treat disease for decades. Unlike antibodies, which can only attack specific alien substances in the body, proteases can find and attach to any number of proteins, and, once bound, can do more than just destroy their target. They could, for example, reactivate dormant proteins.

A lab invention, the PACE platform rapidly evolves novel proteins with valuable features. PACE, the author said, can evolve dozens of generations of proteins a day with minimal human intervention. Using PACE, the team first taught so-called "promiscuous" proteases--those that naturally target a wide swath of proteins--to stop cutting certain targets and become far more selective. When that worked, they moved on to the bigger challenge: Teaching a protease to only recognize an entirely new target, one outside its natural wheelhouse.

"At the outset," said the author, "we didn't know if it was even feasible to take this unique class of proteases and evolve them or teach them to cleave something new because that had never been done before." ("It was a moonshot to begin with," said another author on the paper. But the proteases outperformed the team's expectations. With PACE, they evolved four proteases from three families of botulinum toxin; all four had no detected activity on their original targets and cut their new targets with a high level of specificity (ranging from 218- to more than 11,000,000-fold). The proteases also retained their valuable ability to enter cells. "You end up with a powerful tool to do intracellular therapy," said the author. "In theory."

"In theory" because, while this work provides a strong foundation for the rapid generation of many new proteases with new capabilities, far more work needs to be done before such proteases can be used to treat humans. There are other limitations, too: The proteins are not ideal as treatments for chronic diseases because, over time, the body's immune system will recognize them as alien substances and attack and defuse them. While botulinum toxin lasts longer than most proteins in cells (up to three months as opposed to the typical protein lifecycle of hours or days), the team's evolved proteins might end up with shorter lifetimes, which could diminish their effectiveness.

Still, since the immune system takes time to identify foreign substances, the proteases could be effective for temporary treatments. And, to side-step the immune response, the team is also looking to evolve other classes of mammalian proteases since the human body is less likely to attack proteins that resemble their own.