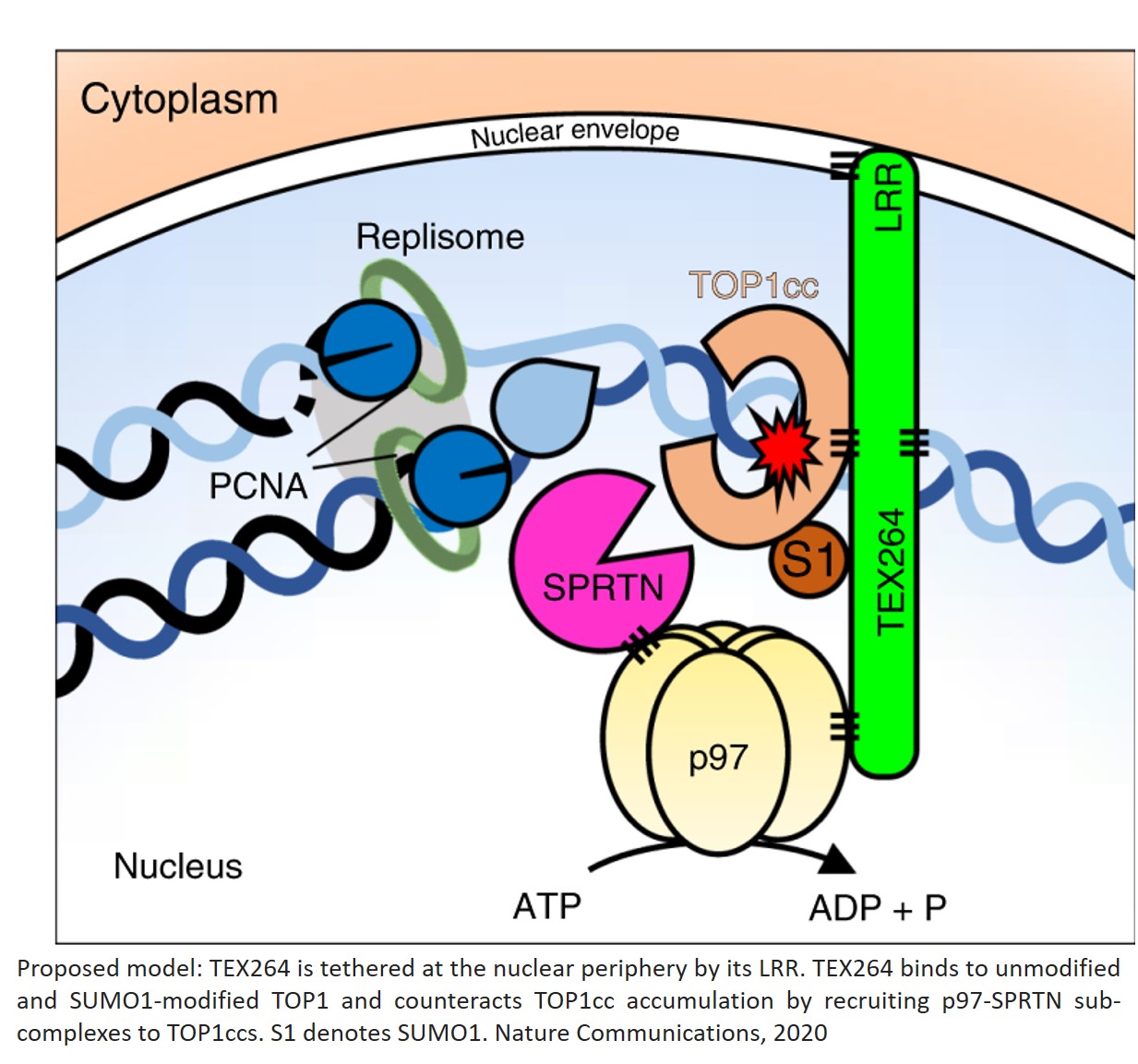 A new 'toolkit' to repair damaged DNA that can lead to ageing, cancer and Motor Neurone Disease (MND) has been discovered by scientists. Published in Nature Communications, the research shows that a protein called TEX264, together with other enzymes, is able to recognise and 'eat' toxic proteins that can stick to DNA and cause it to become damaged. An accumulation of broken, damaged DNA can cause cellular ageing, cancer and neurological diseases such as MND.

Until now, ways of repairing this sort of DNA damage have been poorly understood, but scientists hope to exploit this novel repair toolkit of proteins to protect us from ageing, cancer and neurological disease.

Eukaryotic topoisomerase 1 (TOP1) regulates DNA topology to ensure efficient DNA replication and transcription. TOP1 is also a major driver of endogenous genome instability, particularly when its catalytic intermediate—a covalent TOP1-DNA adduct known as a TOP1 cleavage complex (TOP1cc)—is stabilised. TOP1ccs are highly cytotoxic and a failure to resolve them underlies the pathology of neurological disorders but is also exploited in cancer therapy where TOP1ccs are the target of widely used frontline anti-cancer drugs.

A critical enzyme for TOP1cc resolution is the tyrosyl-DNA phosphodiesterase (TDP1), which hydrolyses the bond that links a tyrosine in the active site of TOP1 to a 3’ phosphate group on a single-stranded (ss)DNA break. However, TDP1 can only process small peptide fragments from ssDNA ends, raising the question of how the ~90 kDa TOP1 protein is processed upstream of TDP1.

The authors find that TEX264 fulfils this role by forming a complex with the p97 ATPase and the SPRTN metalloprotease. They show that TEX264 recognises both unmodified and SUMO1-modifed TOP1 and initiates TOP1cc repair by recruiting p97 and SPRTN. TEX264 localises to the nuclear periphery, associates with DNA replication forks, and counteracts TOP1ccs during DNA replication.

The findings could also have implications for chemotherapy, which deliberately causes breaks in DNA when trying to kill cancerous cells. Scientists believe targeting the TEX264 protein may offer a new way to treat cancer.

The next step of the research will be to test if the behavior and properties of protein TEX264 is altered in ageing and in neurological disorders such as MND.