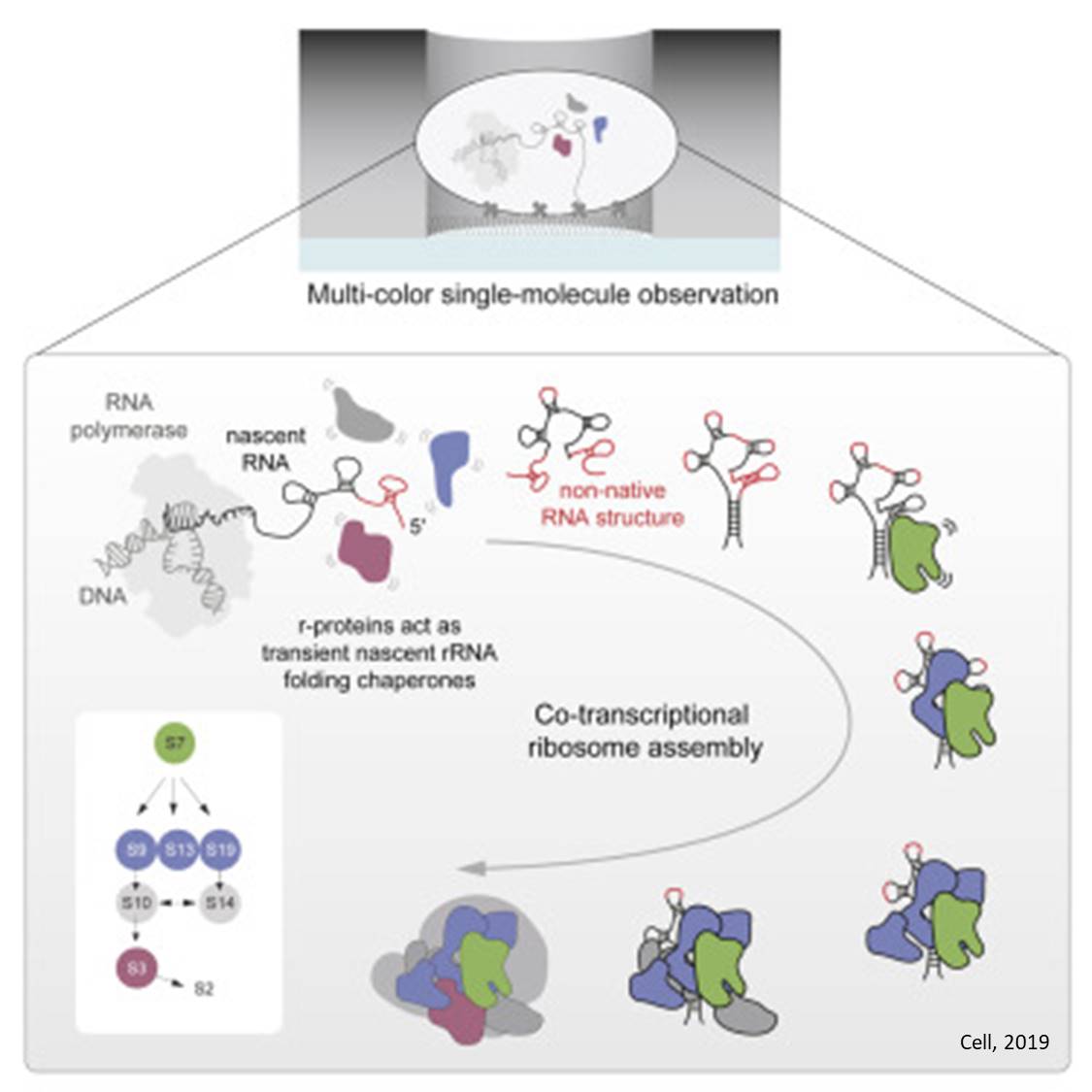 A team of scientists has recorded in real time a key step in the assembly of ribosomes--the complex and evolutionarily ancient "molecular machines" that make proteins in cells and are essential for all life forms.

The achievement, reported in Cell, reveals in unprecedented detail how strands of ribonucleic acid (RNA), cellular molecules that are inherently sticky and prone to misfold, are "chaperoned" by ribosomal proteins into folding properly and forming one of the main components of ribosomes.

The findings overturn the longstanding belief that ribosomes are assembled in a tightly controlled, step-wise process.

"In contrast to what had been the dominant theory in the field, we revealed a far more chaotic process," says the senior author. "It's not a sleek Detroit assembly line--it's more like a trading pit on Wall Street."

The team used an advanced imaging technology called "zero-mode waveguide single-molecule fluorescence microscopy," which they have adapted in recent years for real-time tracking of RNAs and proteins. Ribosomes are made of both RNA and proteins, reflecting a molecular partnership that is widely believed to go back nearly to the dawn of life on Earth.

In a proof-of-principle study published last year, the researchers used their approach to record an early, brief and relatively well-studied stage of ribosome assembly from the bacterium E. coli. This involved the transcription, or copying out from its corresponding gene, of a ribosomal RNA, and initial interactions of this RNA strand with a ribosomal protein.

In the new study, the team extended this approach by tracking not only the transcription of a ribosomal RNA but also its real-time folding. The work provided a detailed look at a complex, and until-now mysterious, part of E. coli ribosome assembly--the formation of an entire major component, or domain, of the E. coli ribosome, with assistance from eight protein partners that end up incorporated into the structure.

A key finding was that the ribosomal protein partners guide the folding of the RNA strand through multiple temporary interactions with the strand, well before they nestle into their final places in the folded RNA-protein molecule. The findings, according to the researchers, also hint at the existence of unknown RNA assembly factors, most likely proteins, that were not present in their lab-dish-type imaging experiments but are present in cells and boost the efficiency of RNA folding.

"Our study indicates that in ribosomal RNA-folding, and perhaps more generally in RNA-folding in cells, many proteins help fold RNA though weak, transient and semi-specific interactions with it," the author says.

The team will now be able to extend this research further to study not only the rest of ribosome assembly, which involves multiple RNA strands and dozens of proteins, but also the many other types of RNA-folding and RNA-protein interaction in cells.

In principle, this research will yield insights into how RNAs misfold and how such events could be corrected. Scientists believe that many diseases involve or potentially involve the improper folding and related processing of RNAs in cells.

Treatments that already target ribosomes might also be improved. Some current antibiotics, including a class known as aminoglycosides, work by binding to sites on bacterial ribosomes that are not present on human ribosomes. These drugs can have side effects because they also impair the ribosomes of good bacteria, for example in the gut. A biosensor to detect tumors at early stages