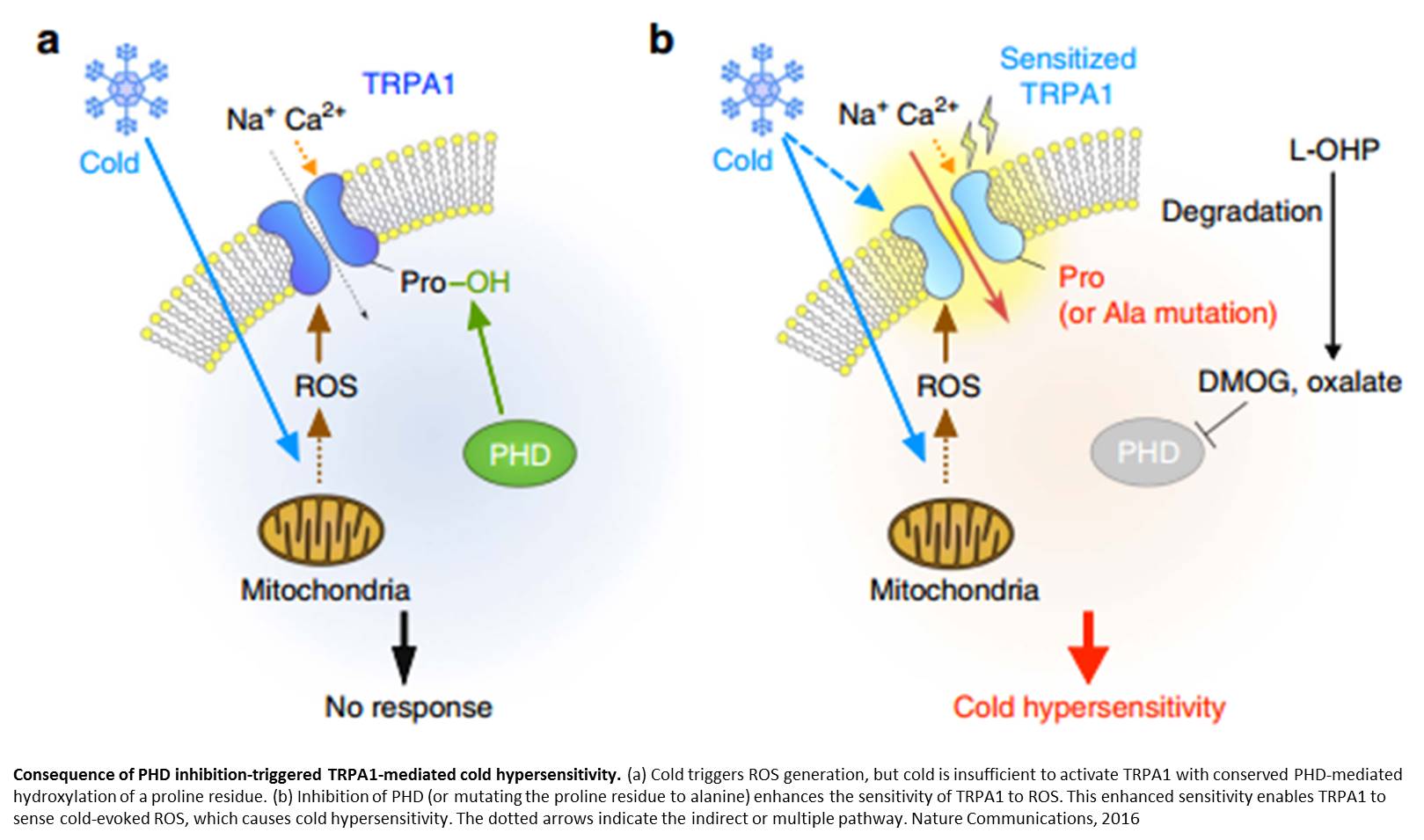 Transient receptor potential ankyrin 1 (TRPA1), a polymodal cation channel, has a well-known molecular property of nociceptor and plays a pivotal role in various types of pain generation. This is because TRPA1 is opened by a large number of irritants and oxidative stimuli, such as reactive oxygen species (ROS). The reversible covalent or oxidative modification of cysteine or lysine residues on the N terminus of TRPA1 is necessary for channel opening in these situations.

Authors previously reported another mechanism for TRPA1 activation: hypoxia inhibits prolyl hydroxylase (PHD) activity, which relieves TRPA1 from the PHD-dependent hydroxylation of a proline residue located within the N-terminal ankyrin repeat domain (ARD) and thus leads to the opening of this channel.

More recently, they found that PHD inhibition is involved in the hindlimb ischaemia/ reperfusion-evoked peripheral dysesthesia in mice. Noxious thermal stimuli are danger signals for animals. The molecular basis governing how animals sense noxious hot stimuli has been well investigated, with some TRP10,11 and other12 channels identified as hot-sensing nociceptors.

By contrast, the current understanding of how noxious cold stimuli are sensed shows limited progress, although the TRPM8-mediated mechanism for sensing innocuous cool stimuli is well defined. TRPA1 was initially discovered to be a noxious cold-activated channel and was a candidate cold nociceptor. However, the early literature shows some disagreement with subsequent studies about the role of TRPA1 as a cold sensor, and it is still debated whether TRPA1 is cold-sensitive or not. A recent study demonstrates that rodent but not human TRPA1 is cold-sensitive in vitro. By contrast, a single-point mutation in the human TRPA1 (hTRPA1) gene is related to the familial episodic pain syndrome that is triggered by cold, and hTRPA1 is intrinsically a cold-gated channel.

Researchers in the current work published in Nature Communications show that inhibiting hydroxylation of a proline residue within the N-terminal ankyrin repeat of human TRPA1 by mutation or using a prolyl hydroxylase (PHD) inhibitor potentiates the cold sensitivity of TRPA1 in the presence of hydrogen peroxide.