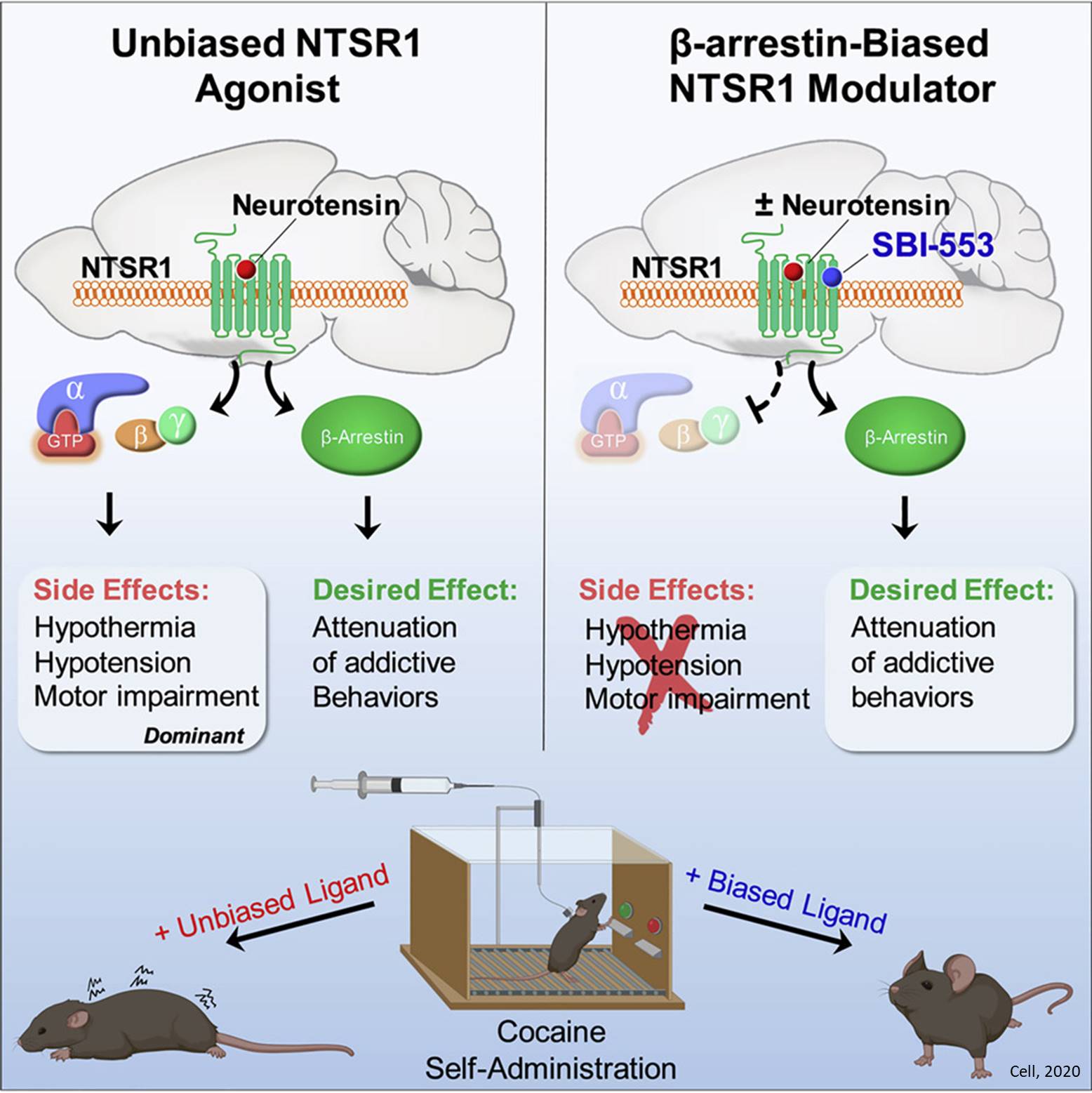 The researchers have developed a synthetic molecule that selectively dampen the physiological rewards of cocaine in mice. It also may represent a new class of drugs that could be more specific with fewer side effects than current medications.

In mice that were treated with the stimulant cocaine or methamphetamine, the new molecule was found to calm their drug-induced hyperactivity and interfere with the dopamine system's ability to change metabolism in the brain's rewards center.

In mice that were allowed to self-administer cocaine, the treatment slowed down their drug use in 20 minutes to an hour, and reduced the amount of drug they used by more than 80 percent, compared to a control group of mice.

The molecule, SBI-553, activates cell surface chemical receptors called G protein-coupled receptors or GPCRs, which are the target of more than 35% of all FDA-approved drugs.

When a GPCR is activated by a signaling molecule, it transmits that signal to the inner portion of the cell via interaction with two intracellular proteins: G protein and beta-arrestin. Most GPCR drugs in use today indiscriminately activate both G protein and beta-arrestin, and sometimes activating both molecules withthe same GPCR can produce dramatically different physiological effects.

Drug developers have been trying to identify compounds that selectively activate one or the other because they have the potential to be safer drugs with fewer side effects.

In a paper appearing in the journal Cell, the researchers report the development of a new class of small molecules that may allow for just that - thereby separating the good effects from the bad.

For decades, researchers working on drug abuse and addiction have pursued molecules that would activate one specific GPCR called neurotensin receptor 1 (NTSR1) as a way to interrupt the actions of stimulants and treat cocaine and methamphetamine addictions.

Neurotensin is known to be involved in drug-seeking behavior and food intake in mice. "It regulates the brain's reward system and motivated behavior," said the lead author on the paper.

But so far, the drugs that activate NTSR1 have severe side effects for blood pressure, body temperature and motor coordination, because those are also controlled by NTSR1. "This was known, but nobody could do anything about it," the senior author said.

The team screened 400,000 small molecule drugs to see if any of them could stimulate the NTSR1 beta-arrestin response.

One small molecule called SBI-553 that emerged from the screen acts at a previously unknown site on the NTSR1 and selectively activates the beta-arrestin without activating the G protein. SBI-553 can bind the NTSR1 at the same time as this receptor's natural activator, a peptide known as neurotensin, and it promotes neurotensin's ability to activate beta-arrestin while blocking its ability to activate the G protein.

Like conventional NTSR1 activators, SBI-553 was found to reduce the amount of cocaine the animals consumed and their associated drug-craving. But it did so without the usual side effects of decreased blood pressure and body temperature and motor coordination problems.

"The current findings suggest that the selective activation of the NTSR1 beta-arrestin response is sufficient to produce some of the anti-addiction effects attributed to the NTSR1, but not its effects on blood pressure and body temperature," the author said.

Because NTSR1 is a prototypical GPCR, molecules of this class can now be pursued for other receptors, the author said. "This kind of modulator may allow for the fine-tuning of receptor signaling."