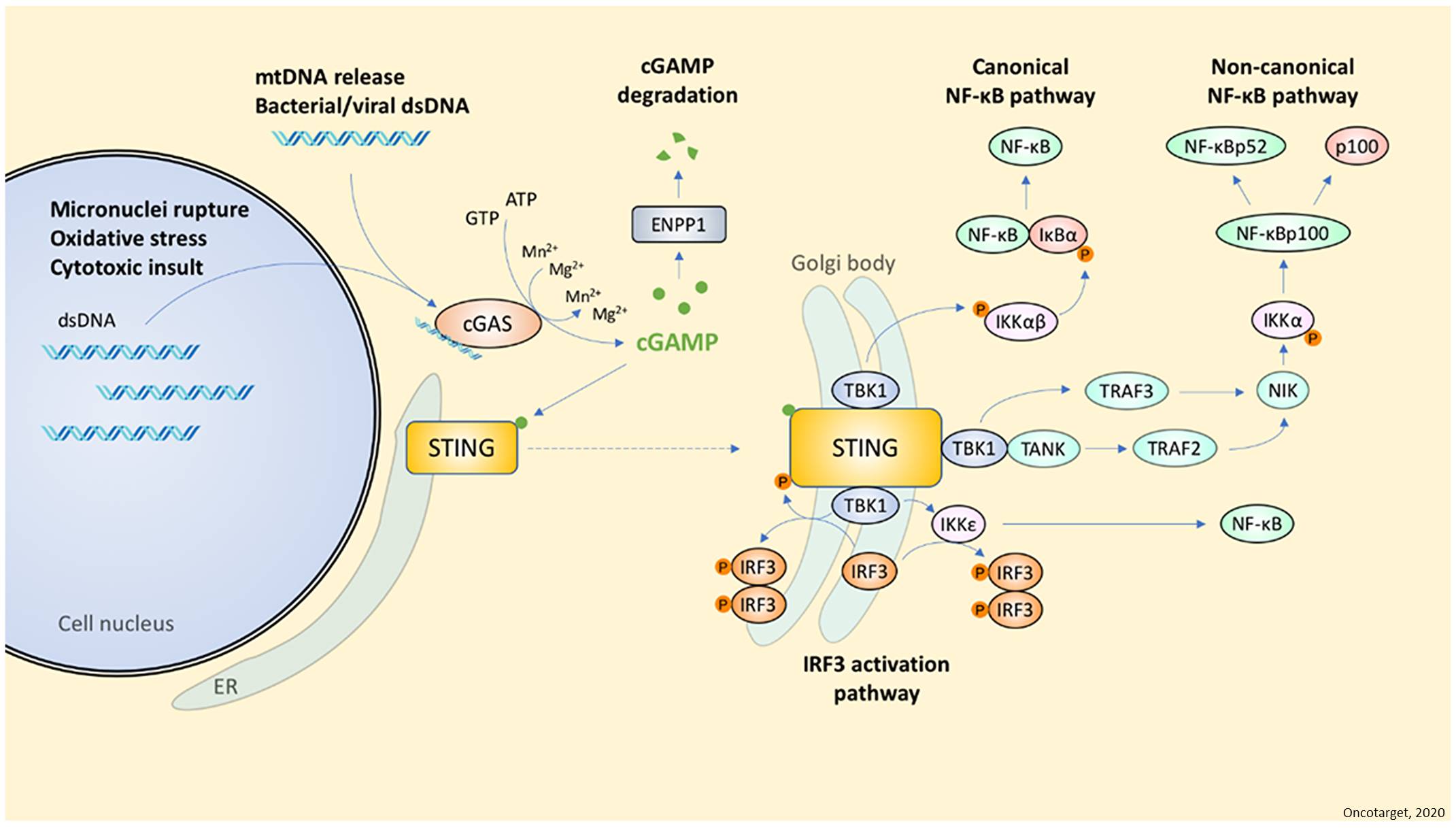 Viruses multiply by injecting their DNA into a host cell. Once it enters the intracellular fluid, this foreign material triggers a defense mechanism known as the cGAS-STING pathway. The protein cyclic GMP-AMP Synthase (cGAS), which is also found inside the fluid, binds to the invading DNA to create a new molecule. This, in turn, binds to another protein called Stimulator of Interferon Genes (STING), which induces an inflammatory immune response.

Sometimes, the material contained inside the fluid - and in contact with the cGAS protein - comes not from a virus but from the cell itself, for instance after the nucleus has accidentally ruptured. When this happens, the cGAS-STING pathway isn't activated. Scientists have demonstrated how cells are able to respond differently to their own DNA and to genetic material from a pathogen - and avoid attacking the wrong target. Their discovery, published in a paper in the journal Science, sheds new light on the complex processes at work in the body's inflammatory response.

The team uncovered new insights into the key role of a small protein known as Barrier-to-Autointegration Factor (BAF). They showed that, by binding to the inoffensive DNA, BAF prevents the cGAS protein from doing the same, thereby stopping the cGAS-STING pathway in its tracks.

BAF strengthens the cell nucleus, connecting the nuclear envelope (or membrane) to the DNA inside. Experiments have shown that when this protein is removed from lab-grown cells, the nucleus ruptures. This breach releases the genetic material into the intracellular fluid, where it comes into contact with the cGAS protein and triggers the cGAS-STING pathway - just as if it were foreign DNA.

There are various ways to cause a nucleus to rupture, such as by applying mechanical pressure. But according to one of the paper's lead authors, only one of these methods - removing the BAF protein - induces an immune response. "We can therefore conclude that BAF plays a key role in preventing the cell from attacking its own DNA," says the author.

The protein's inhibitor role is vitally important: although the cGAS-STING pathway helps the body fight off infections, it also needs to be kept in check. "Nuclei do occasionally rupture, but cells are able to repair the damage," says another lead author of the paper. "If cGAS bound to the DNA every time that happened, the consequences would be more serious."

The dangers of an overactive cGAS-STING pathway can be seen in Aicardi-Goutières syndrome: a rare and usually fatal genetic disorder that induces an excessive inflammatory response as if the body's cells were under constant attack from invading pathogens.

BAF is also believed to play a role in some types of tumor. According to the author, a high concentration of the protein in cancer cells may be associated with a poorer prognosis. "It could be that BAF makes tumors more resistant," the author explains. "By preventing activation of the cGAS-STING pathway, it might allow cancer cells to evade the body's immune system."

The protein is found in varying quantities in different types of cells. The team is planning to dig deeper into these variations as they seek to understand how different tissue types respond to infection and inflammation.