The molecular details of lung development 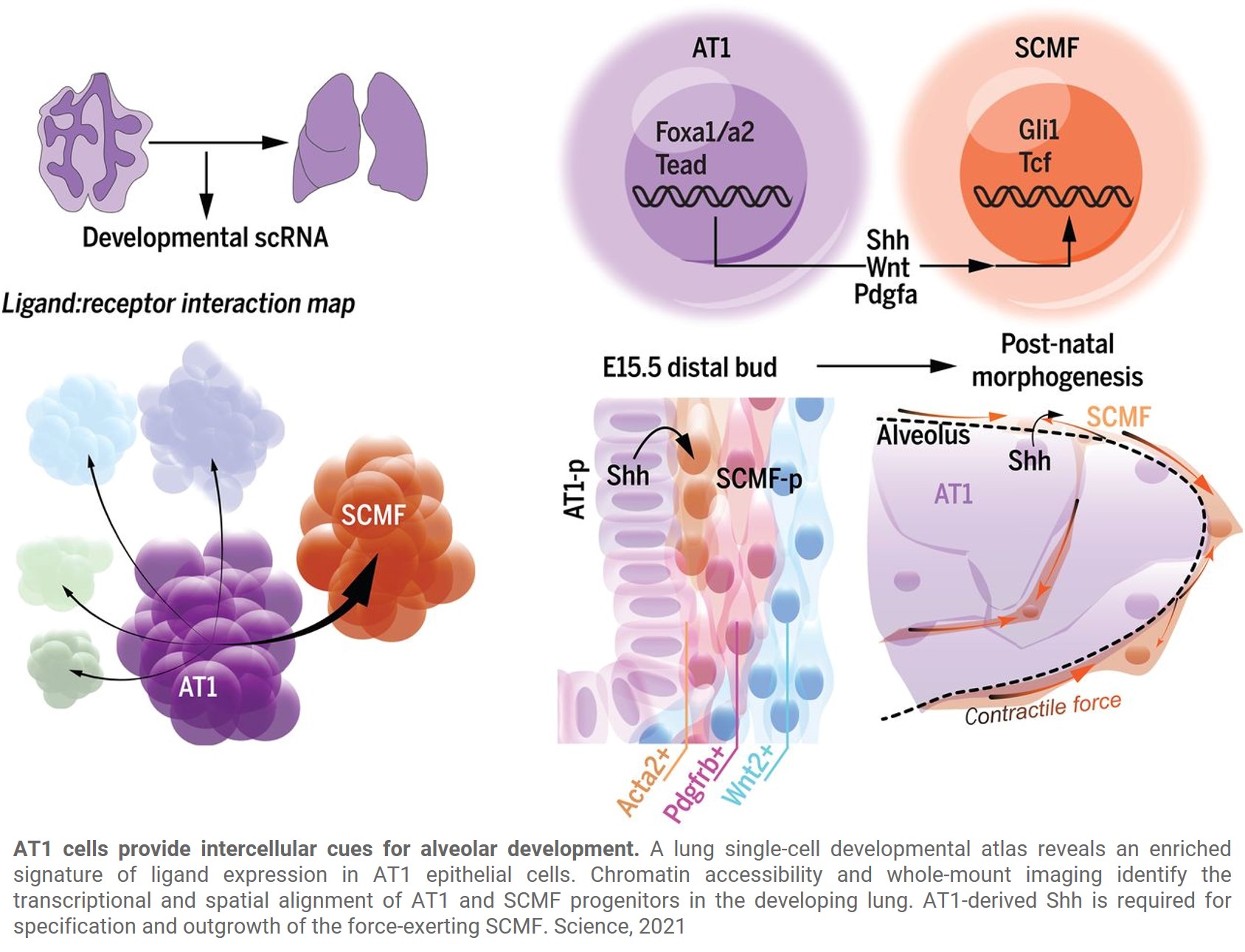 Researchers have produced a detailed molecular atlas of lung development, which is expected to be a fundamental reference in future studies of mammalian biology and of new treatments for diseases, such as COVID-19, that affect the lungs.

The researchers, who published their study in Science, generated a broad atlas of cell types in the developing and adult mouse lung by measuring the expression of genes in thousands of individual mouse lung cells across the lifespan, covering multiple cell types and stages of maturation, from early development in the womb to adulthood. Analyzing all this data, they predicted thousands of signaling interactions among different cell types in the developing lung, confirmed many of these with functional experiments, and identified several cells and molecular regulators that are critically important for normal lung development.

"This study provides foundational information to guide our understanding of how lung function develops, and how the early postnatal period of life is a time of rapid adjustment in the lungs to optimize gas exchange," said study senior investigator.

The trove of new data is likely to be valuable in the development of future treatments for early-life lung problems, including insufficient lung development in premature babies. It may also speed the search for better therapies for pneumonia and chronic obstructive pulmonary disease (COPD), two of the leading causes of death worldwide.

The study focused largely on the developmental steps leading to the maturation of alveoli. These delicate sac-like structures in the lungs contain thin, capillary-rich membranes that orchestrate the exchange of carbon dioxide in the bloodstream for oxygen in inhaled air. There are hundreds of millions of alveoli in an average human lung, and the total surface area of their gas-exchange membranes has been estimated as approximately the same as a tennis court's.

Many human diseases, from birth to old age, disrupt these vital structures. Yet the details of how cells emerge and signal to each other to bring about the formation of alveoli in early life have remained largely mysterious.

The team used two relatively new techniques called single-cell RNA sequencing and single cell ATAC sequencing to record the expression and accessibility of genes in thousands of individual cells at seven different time-points during lung development in mice. They then analyzed the gene activity in each cell type, at each time point, to predict which cells were making important signaling molecules and which were expressing the receptors that receive those signals. In this way they made a map of predicted interactions among all these cells, from which they could identify key factors in alveolar development. Lastly, they confirmed the activity of two of these pathways, the Wnt and Sonic Hedgehog (Shh) pathway, using genetic mouse models to inactivate their function in specific cell types identified in the single cell experiments.

A novel finding of the study was the identification of a cell type known as the alveolar type 1 epithelial cell (AT1), which was already known to help form alveolar gas exchange interface, as a crucial originator and hub of molecular signals that guide alveolar development. The researchers also determined that another cell type known as the secondary crest myofibroblast (SCMF) plays a key role in guiding the maturation of alveolar structures. The team moreover identified several transcription factor proteins--which regulate gene activity--as crucial for normal alveolar development. Some of these findings were also confirmed to occur in the human pediatric lung. The vast new dataset generated by the researchers should empower many future studies, including deeper studies of human lung development.

The molecular details of how alveoli develop will also inform future research aimed at treating disorders that affect these structures. Babies that are born very prematurely often suffer from respiratory distress because their alveoli are not yet fully developed. Pneumonias, which can be caused by bacteria or viruses--including SARS-CoV-2--and can affect anyone from childhood to old age, usually feature a storm of alveoli-damaging immune molecules and immune cells, and the destruction of the alveolar gas-exchange interface. Similarly, COPD, which can result from long-term cigarette smoking, involves chronic inflammation and degeneration of alveolar structures.

"We are hopeful that our study will provide a framework for a better understanding of the molecular pathways that could be harnessed to promote lung regeneration after acute or chronic injury," the author said.