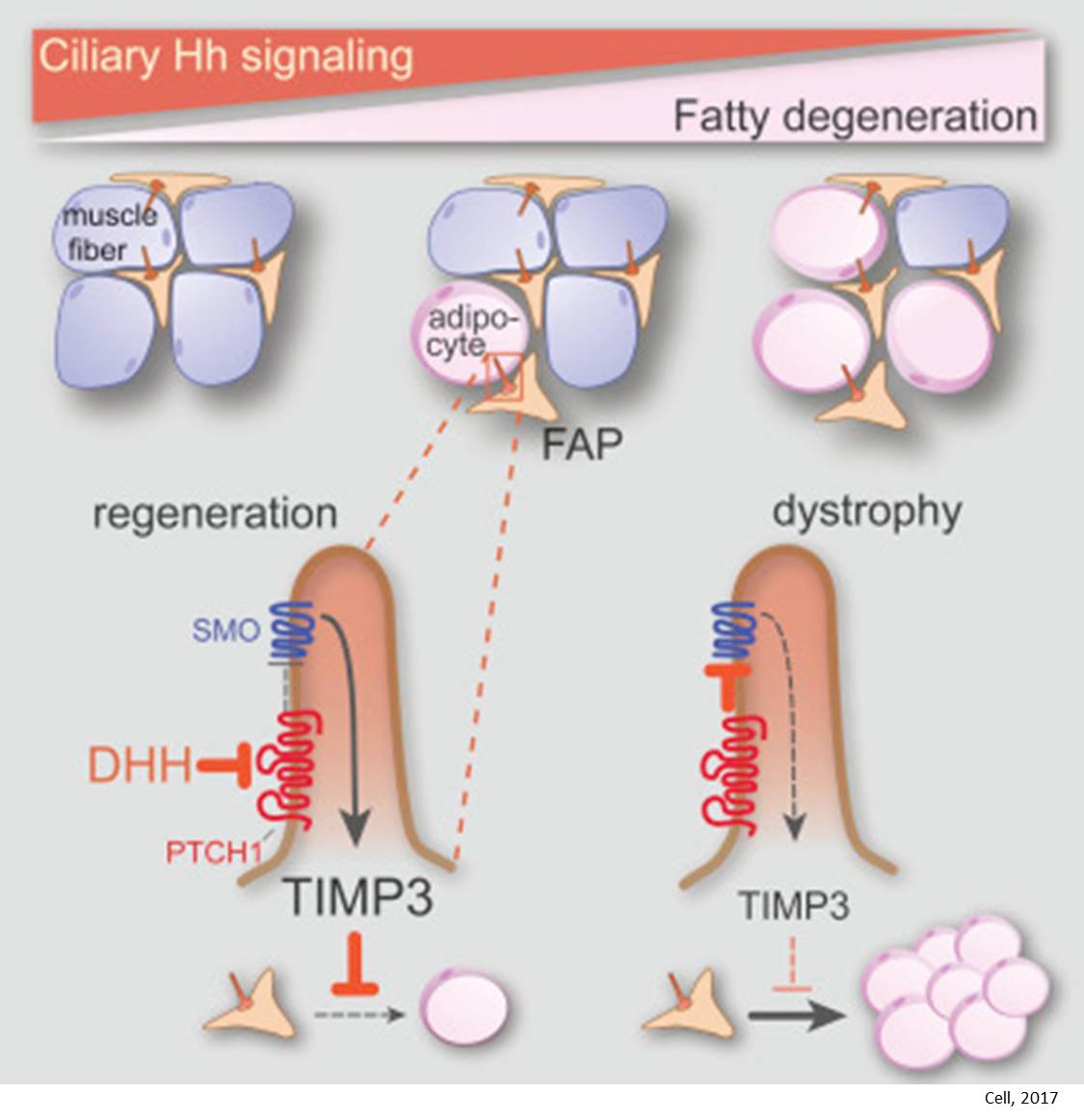 Like it or not, as we age, our muscle cells are slowly exchanged, one by one, for fat cells. This process quickens when we injure a muscle, and an extreme form of this process is also seen in muscle-wasting diseases such as Duchenne muscular dystrophy (DMD). Now, scientists have shown that cellular antennae called cilia, found on fat-forming cells interspersed in muscle, play a key role in this muscle-to-fat transformation.

The findings, revealed in experiments with mice,   published in Cell, suggest a previously unsuspected connection between cilia and tissue renewal. High levels of intramuscular fat have long been associated with a loss of strength and impaired mobility, as well as more falls in elderly or obese individuals, and in patients with DMD. "The frailty of age is a huge biomedical problem," said senior author of the new paper. "This study helps pave the way to learn how muscles normally age, and provides a new way to possibly improve muscle repair."

Tiny cellular appendages called primary cilia, which look a bit like the cellular tentacles that paramecia and other single-celled critters use to move and gather food. But unlike those motile cilia, primary cilia don't move at all. Instead, they stand stiff and solitary on the surface of nearly all of our cells, including neurons, skin cells, bone cells and certain stem cells.

For centuries, these little attachments were largely ignored, and considered a vestigial structure with no known function. But "there has been a renaissance over the past decade in figuring out what these cilia do,"senior author said, and recent work by members of his lab and others has revealed that primary cilia act much like cellular antennae, receiving molecular cues from neighboring cells, and processing environmental signals such as light, temperature, salt balance, and even gravity.

Some of the best-studied examples of cilia function come from early stages of embryonic development, when the arms and legs are just tiny "buds" on the embryo. The limb buds receive cues from a fundamental cell-signaling pathway, known as Hedgehog, that specify the number of digits you will have on your hands and feet, and tell the pinky to develop differently than the thumb. Defects in cilia can disrupt how cells interpret those signals, leading to extra fingers or toes.

To understand if primary cilia have a role beyond development, and play a part in maintaining adult tissues, first author of the new study, set out to ask whether signaling by cilia is involved in muscles' ability to heal following injury.

Previous work has shown that when muscle is injured, fat-forming cells that live alongside muscle cells, called fibro/adipogenic progenitors (FAPs), divide and differentiate into fat cells. The author found that, unlike muscle cells, these fat-forming FAPs are more likely to carry primary cilia, and that muscle injury further increased the abundance of FAPs with cilia. These observations suggested that cilia might be playing an important role in fat formation.

To test this hypothesis, the research team used two mouse models of muscle injury -- an acute injury model created by injecting damaging agents into mouse muscles, and a chronic injury model with progressive loss of muscle fibers such as that seen in in DMD. When the scientists genetically blocked the ability of FAPs to form cilia, both injury models showed lower amounts of fat in muscle. What's more, the loss of cilia not only led to the loss of fat, but also aided muscle regeneration.

"That was unexpected," the author said. "We converted muscle in a mouse model of DMD into muscle that was more like that of a normal mouse."

Through a series of experiments, the group discovered that genetically engineering cells without cilia had resulted in a low-level activation of the Hedgehog pathway, which was enough to block fatty degeneration of skeletal muscle. When the researchers used other methods to amplify Hedgehog signaling, mouse muscle again became less fatty.

"I was sitting at the microscope and thought, 'Where's all the fat? It's gone!'" author said, recalling his eureka moment when he made the Hedgehog connection. "I was almost dancing."

With further investigation, the researchers found that a key protein in the Hedgehog pathway called TIMP3 was responsible for the effect. By using a small molecule called batimastat, which mimics the effects of TIMP3, the researchers were able to block injury-induced fat formation in muscle. The team is now looking into other molecules that could have the same effect, which could potentially lead to treatments for age- and injury-related muscle loss in humans.