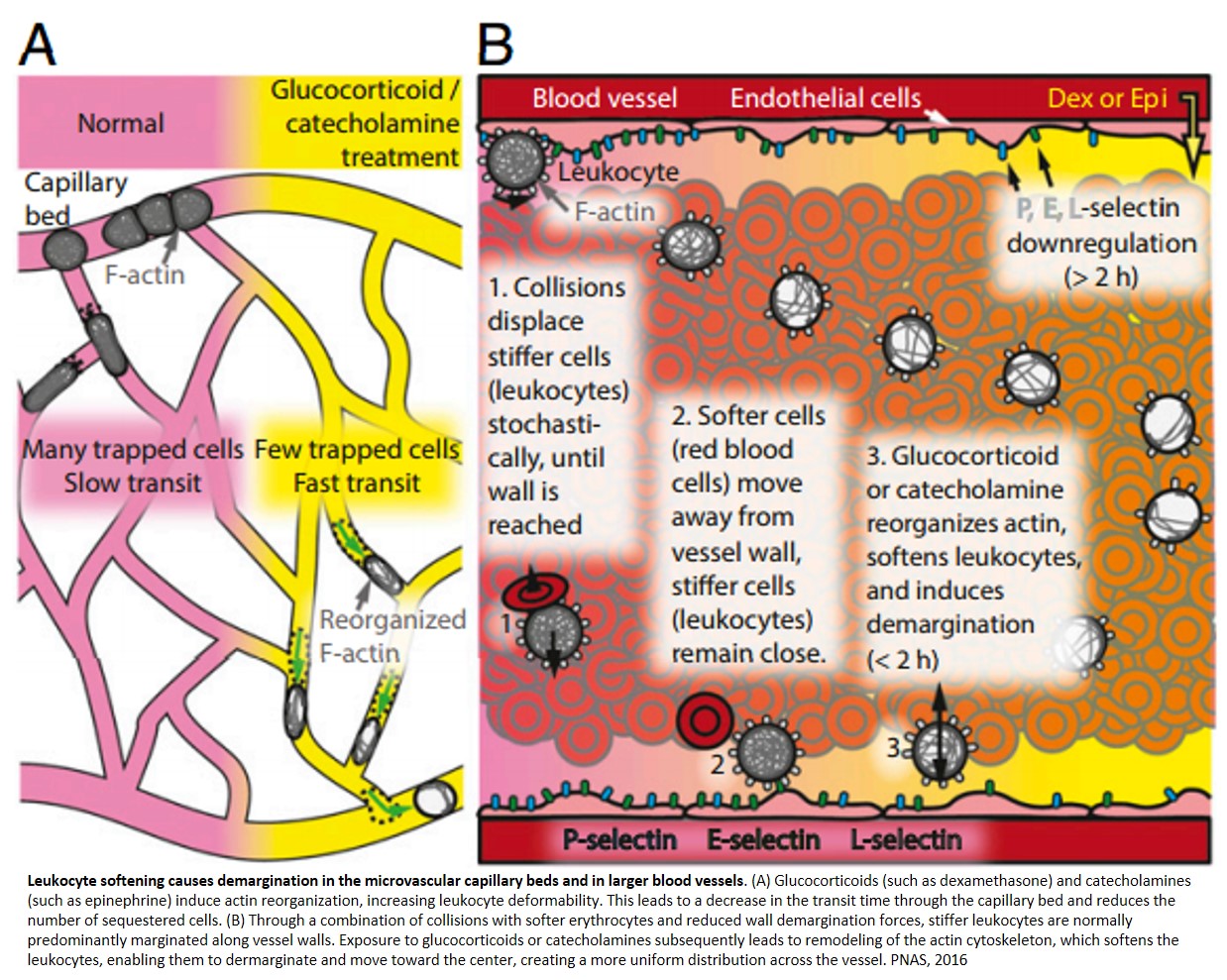 Using a model blood vessel system built on a polymer microchip, researchers have shown that the relative softness of white blood cells determines whether they remain in a dormant state along vessel walls or enter blood circulation to fight infection. Changes in these cell mechanical properties - from stiff to soft - can be triggered as a side effect of drugs commonly used to fight inflammation or boost blood pressure.

Other researchers have found that blood flow affects the cells that line arteries and that particles within cells tend to congregate near cells walls. Better understanding the role of physics in fine-tuning such biological processes could give researchers new approaches for both diagnosing and treating disease.

The work, believed the first to show how biophysical effects can control where white blood cells are located within the blood circulation, is published in the journal Proceedings of the National Academy of Sciences.

Researchers began studying the issue to better understand a common side effect of glucocorticoid drugs such as hydrocortisone used to treat inflammatory disorders such as asthma and allergic reactions. These hormonal drugs prompt an increase in white blood cell counts, a change that had been attributed to biological processes, including a reduced "stickiness" between the cells and blood vessel walls. The increase in white cell count is also seen with drugs that support blood pressure, such as epinephrine, also known as adrenaline.

Researchers constructed model blood vessel systems that include artificial blood vessels with diameters as narrow as the smallest capillaries in the body. To isolate effects attributable only to physics, the systems - which were fabricated in Georgia Tech's Institute for Electronics and Nanotechnology - did not include the endothelial cells that normally line blood vessels in the body.

Using blood samples taken from a healthy human volunteer, they studied the behavior of white blood cells in the presence - and absence - of the drugs dexamethasone - a glucocorticoid drug - and epinephrine. They also used atomic force microscopy to characterize the stiffness of individual white blood cells before and after they had been exposed to the drugs, and determined that the drugs cause the cells to become significantly softer than before exposure.

"When we fluorescently label the white blood cells and perfuse them into the artificial vessels, the white blood cells are always flowing along the edge, on the walls of these artificial blood vessels," said the senior author. "But when they are exposed to the drug, they go to the center of the channel and enter the main blood flow. Then, we discovered that the drugs cause the cells to remodel actin, which comprises the 'skeleton' of all mammalian cells."

The group's overall hypothesis is that the body uses the mechanical properties of these cells to help control their activity and where they are located within the circulation. The relative softness or stiffness of the cells, which collide constantly with billions of other cells in the bloodstream, including red and white blood cells, causes the cells to self-sort and determines where they end up physically within both the model blood vessels and in the human body.

Researchers hope to study how physical properties affect the movement of hematopoietic stem cells used in bone marrow transplants. Once injected intravenously into the body, the cells quickly move from the circulation to bone marrow sites where they belong, and they believe mechanical properties may also play a role in this homing process.

Specific bacteria in the small intestine are crucial for fat absorption Why is it harder for females to gain weight?