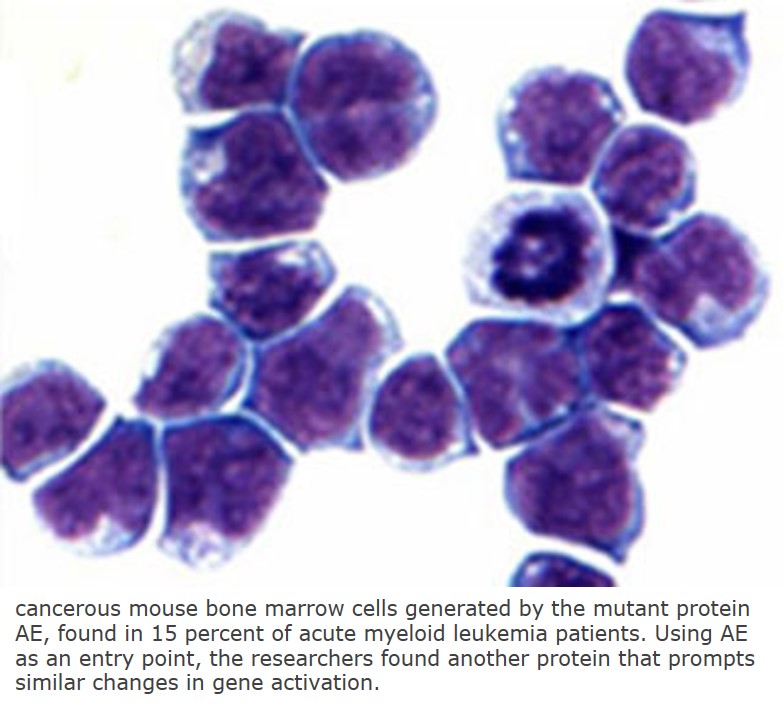 The malignancy begins in the bone marrow, and from there can spread rapidly to the bloodstream, depriving the body of the essential blood cells that carry oxygen and fight infections.

Researchers identified a variety of mutations associated with this disease, including a DNA rearrangement found in about 15 percent of patients. The abnormal DNA-binding protein produced as a result of this mutation takes on entirely new functions, dramatically altering a set of genes that are turned on in a cell to promote the cancer. But how this mutation affects these changes has remained mysterious.

In their new work published in Genes and Development, the researchers describe how they identified the molecular mechanism behind this gene activation.
The researchers began by searching for proteins that interact with the mutant protein, known as AE, produced by a DNA rearrangement. Their screen identified JMJD1C, an enzyme that removes chemical tags, known as methyl groups, from histones, which are proteins contained in chromosomes. These tags serve as repressive marks, indicating that genes in the associated region should be turned off.

To investigate the relationship between JMJD1C and AE, the team first explored the broader effects of removing JMJD1C. "We found that numerous genes were down-regulated upon loss of JMJD1C, and the set overlaps significantly with the genes that are normally activated by AE," explains first author.

The loss of gene expression turns out to have dramatic consequences for the disease. The team found that acute myeloid leukemia cells are addicted to the presence of JMJD1C, and without it they cannot survive. "In fact, these cells were very sensitive to depletion of JMJD1C," says the author. "We see an increase in apoptosis, a sort of cellular suicide."

The team confirmed that JMJD1C interacts with AE, and demonstrated that the enzyme is required for AE to exert its cancer-promoting effects. But they also found that JMJD1C plays an even a broader role in acute myeloid leukemia, beyond its interaction with AE.

The team found at least two other proteins that can recruit JMJD1C to target genes in diseased cells that lack AE, fueling leukemia growth.

These results suggest that JMJD1C may play a general role in promoting growth in myeloid leukemias, according to the researchers. There are already small molecules that inhibit this class of enzymes.