A glycolytic enzyme plays a major role in cancer 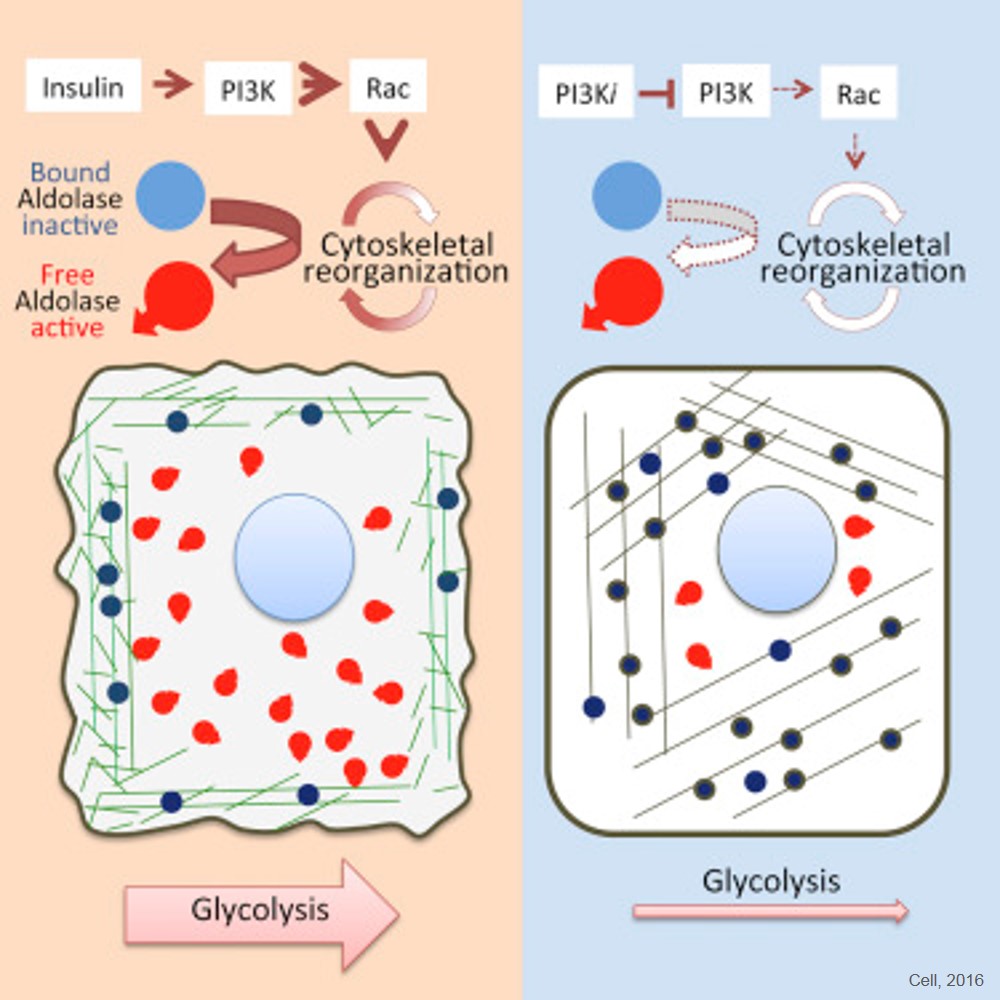 PI3K (phosphoinositide 3-kinase) was first discovered 20 years ago and when it functions normally, the PI3K pathway regulates key cell functions including growth, motility, proliferation and differentiation. But an overactive PI3K signaling pathway can contribute to the development of breast, ovarian and endometrial cancers. Based on these observations, the development of PI3K inhibitors has been a major focus of personalized cancer therapies.

"Inhibiting PI3K leads to a profound inhibition of glucose breakdown," explains senior author of the study. "This is particularly important for cancer cells because they rely heavily on the metabolism of sugar for their self-renewal, generating not only energy but also biomass, the building blocks with which DNA and proteins are made."
A cascade of enzymes catalyzes glycolysis, but a focused approach using mass spectrometry, pinpointed the enzyme aldolase as the critical target of PI3K-mediated regulation.

"Aldolase is distinct from other enzymes involved in glycolysis in that it catalyzes the breakdown of the 6-carbon backbone of sugar into two 3-carbon molecules," says the senior author. "These 3-carbon building blocks can then be the starting points to generate new biomass that ultimately enables cell division and the expansion of the tumor mass."

Authors show that PI3K directly coordinates glycolysis with cytoskeletal dynamics in an AKT-independent manner. Growth factors or insulin stimulate the PI3K-dependent activation of Rac, leading to disruption of the actin cytoskeleton, release of filamentous actin-bound aldolase A, and an increase in aldolase activity.
Consistently, PI3K inhibitors, but not AKT, SGK, or mTOR inhibitors, cause a significant decrease in glycolysis at the step catalyzed by aldolase, while activating PIK3CA mutations have the opposite effect.

This new discovery creates a previously unidentified link between a cancer cell's form and shape and its metabolic capabilities, say the authors, explaining that this method doesn't involve any nuclear transcription or translation, rather it is redistribution of the aldolase from the cytoskeleton into the cytoplasm that paces glycolysis.

"This is a very important discovery in that it indicates that the highly motile actin - long known as a hallmark of cancer cells and the property that makes them look transformed to the human eye - is, in fact, playing a major role in regulating cancer metabolism," says the study's co-senior author. Brain connection between memory and feeding behavior to control overeating

How growth hormone in brain acts to prevent weight loss