A mutated gene found in families with multiple tumors, including cardiac angiosarcoma 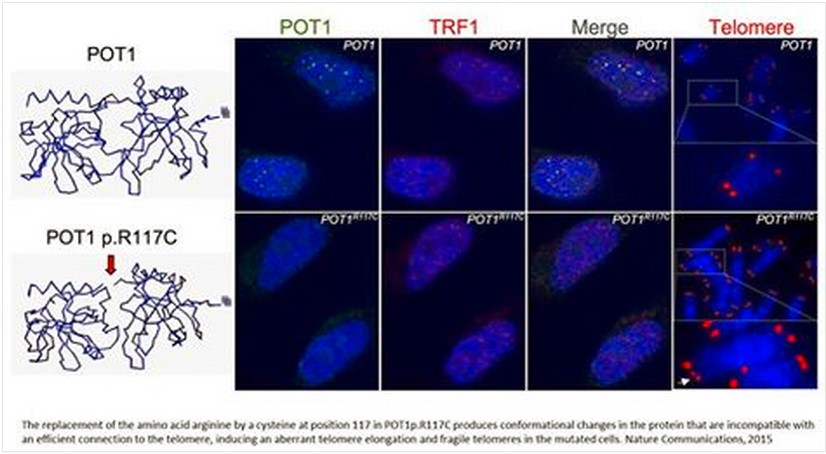 Cardiac angiosarcoma (CAS) is a rare but malignant disease. In the case of hereditary CAS, the median survival expectancy is only four months because the disease is diagnosed at an advanced stage. Until now, no related gene has been identified.

After sequencing their exome -- the part of the genome that is translated into protein and therefore the one that most influences the state of the organism --, they found that the cause of the illness was a mutation in a gene called POT1 (protection of telomeres 1).

Researchers also observed that hereditary CAS occurs in families with a high incidence of other types of cancer. This is similar to what is observed in people affected by the so-called Li-Fraumeni syndrome, which is caused by a mutation in the tumour suppressor gene -- nicknamed the genome guardian -- P53. However, POT1, but not P53, was found mutated in the families affected by CAS.

POT1 is one of the proteins that comprise the protective shield around telomeres -- the structures that protect the tips of chromosomes -- and it has recently been identified as responsible for other forms of hereditary cancer: melanoma and familial glioma.

The mutation (R117C) identified in this case is located in a region of POT1 that is highly preserved from an evolutionary point of view and, therefore, very important. When anomalies occur in the telomeres, the chromosomes become unstable, which, in turn, leads to extended genomic instability.

The experiments carried out on structural models as well as in cells, reveal that this mutation prevents the protein synthesised by POT1 from binding the telomeres, abnormally long telomeres and increased telomere fragility. This result in high genomic instability and, consequently, a greater risk of cancer.

Researchers are working on an animal model for this mutation, with the aim of developing novel treatments against human tumours that carry the mutation.

The researchers hope this discovery will make it possible to identify more carriers who are unaware of their risk.