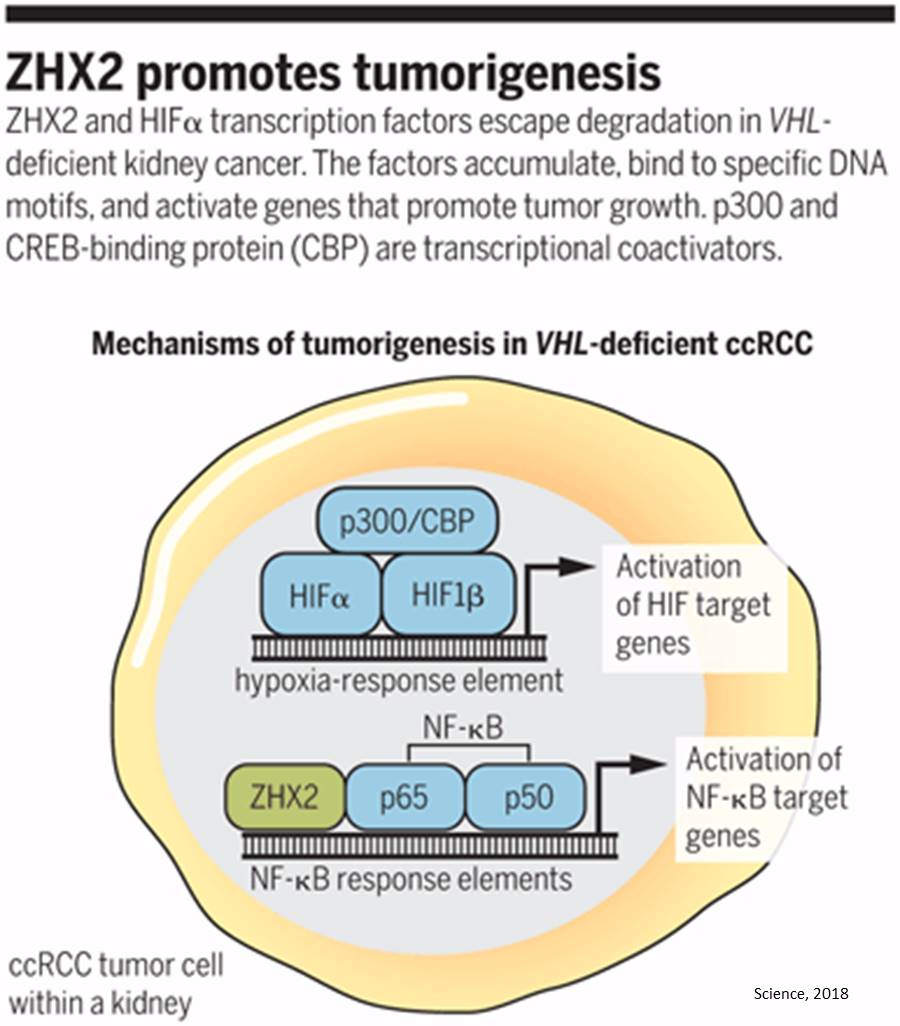 More than 90 percent of the most common type of kidney cancer have a genetic change that leads to the loss of an important tumor suppressor gene called VHL. In a study published in the journal Science, researchers identified a new downstream effect of this genetic change that is helping to drive kidney cancer: They found that a protein called ZHX2 over-accumulates in these cells and helps to turn on other signals involved in cancerous growth. Their findings suggest that ZHX2 is a potential new therapeutic target for clear cell renal cell carcinoma, which is the most common type of kidney cancer.

"If you lose VHL, you will accumulate lots of this ZHX2 protein, which will turn on signals that promote kidney cancer," said the senior author. "This protein could be a potential therapeutic target used to treat kidney cancer on its own or in combination. The next step is to try to figure out how we can target it therapeutically."

Renal cell clear cell carcinoma is the most common type of kidney cancer, accounting for about 70 percent of all cases, researchers report. Approximately 90 percent of patients with clear cell renal cell carcinoma have genetic mutations or alterations that cause them to lose the function of VHL. When the function of VHL is gone, cells can accumulate signals that trigger blood vessels to grow.

"VHL is the most important tumor suppressor in clear cell renal cell carcinoma," the senior author said. "There are extensive reports showing that from initiation to tumor progression to metastasis -- during the whole process of kidney cancer development - VHL plays a central role. It is important to understand how the VHL loss contributes to kidney cancer, and how we can therapeutically target the downstream effects of this loss in kidney cancer."

There are U.S. Food and Drug Administration-approved drugs that block cell signals involved in abnormal blood vessel production -- which is a downstream effect of VHL loss - that are part of the standard of care for clear cell renal cell carcinoma. Patients can show little response to these drugs or can develop resistance, so the researchers wanted to search for other targets that accumulate in cells lacking VHL function that help to drive the abnormal cancerous growth.

The researchers created a screening technique to discover new molecules that might help drive cancer when VHL is lost. This led them to determine that kidney cancer cells lacking VHL usually had more ZHX2. By eliminating ZHX2 from their laboratory models, they inhibited cancer cell growth, invasion and the cancer's spread. In addition, they saw that it was involved with signals that can help cancer cells grow. Loss of ZHX2 inhibited signaling through the transcription factor NF-κB, and ZHX2 bound to many NF-κB target genes.