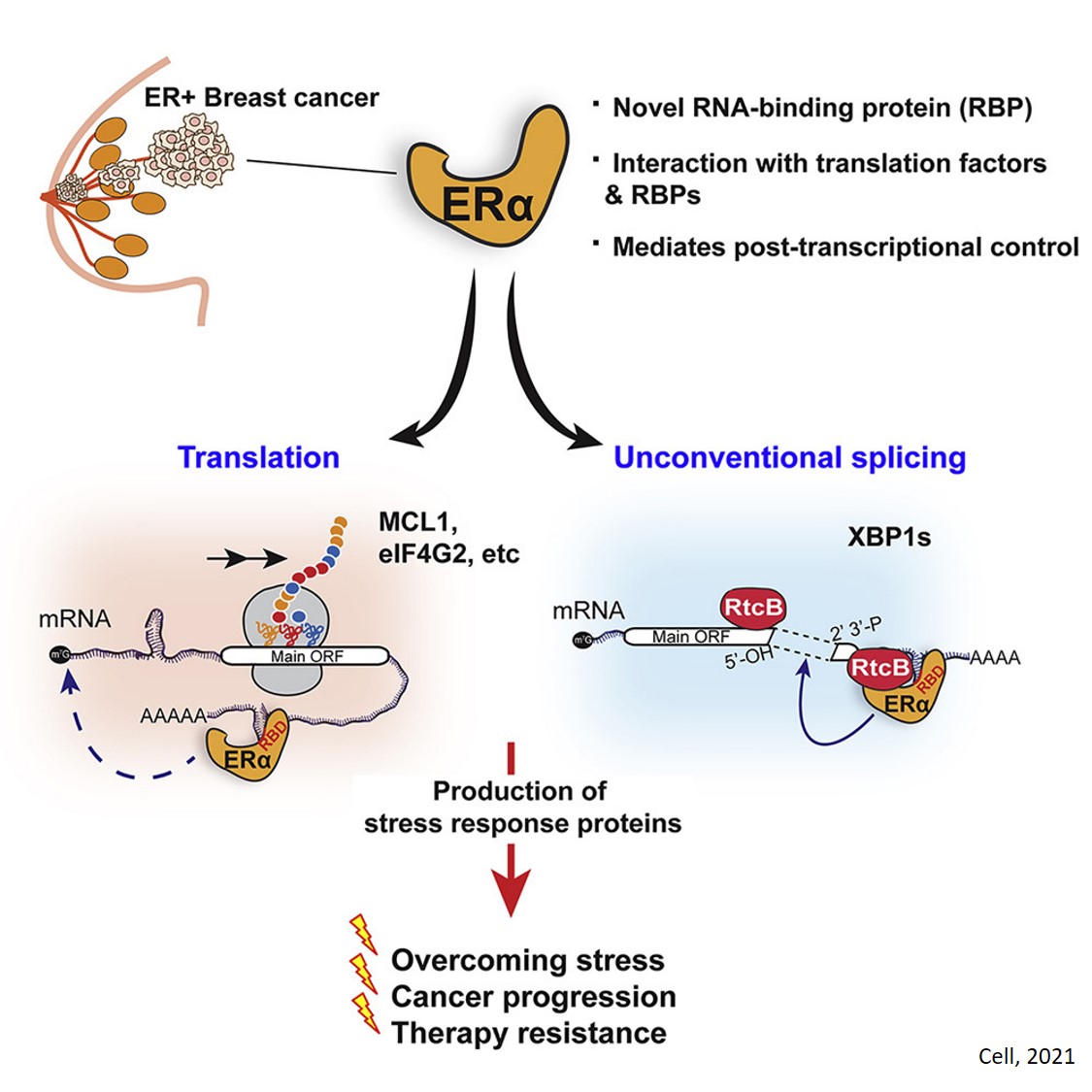 Cancer cells proliferate despite a myriad of stresses—from oxygen deprivation to chemotherapy—that would kill any ordinary cell. Now, researchers have gained insight into how they may be doing this through the downstream activity of a powerful estrogen receptor. The discovery offers clues to overcoming resistance to therapies like tamoxifen that are used in many types of breast cancer.

Estrogen receptor α (ERα) drives more than 70 percent of breast cancers. The new research published in Cell discovered that in addition to its well-known activity in the nucleus, it can also help malignant cells overcome innate anti-cancer mechanisms and develop resistance to treatment.

In the nucleus, ERα regulates the conversion of DNA to messenger RNA (mRNA), a process known as transcription. Once formed, the mRNA strand travels from the nucleus into the cytoplasm, where it instructs ribosomes to make protein, a process known as translation. To their surprise, the researchers found that ERα plays a role in this process as well by binding to the newly formed mRNA.

"The RNA-centric function of the estrogen receptor has so far been hidden behind its well-established role as a transcription factor, and may have been supporting cancer progression on the sly," said the first author of the study.

Using breast cancer cell lines, the research team saw how ERα tends to bind to RNAs, particularly messenger RNAs (mRNAs) involved in cancer progression. Some of these mRNAs keep cells from committing suicide when they accumulate too many harmful mutations. Others help them proliferate under extremely difficult conditions, such as lack of oxygen or nutrients. Still others help them evade therapeutic interventions.

“Cancer cells are constantly being exposed to stress, and these cells have learned to live with it,” said the senior author of the study. “Many compounds used to kill cancer induce stress in the cancer, and most of the cancer cells die. But some eventually find a way to bypass the stress induced by the therapy.”

Endocrine therapies, such as tamoxifen, block the transcription activity of ERα in a cancer cell’s nucleus. Although they can be highly effective at first for most patients with ERα-positive breast cancer, a significant number develop drug resistance.

To understand ERα's role in this, the team analyzed cancer cells from 14 patients diagnosed with ERα-positive breast cancer and found they had elevated levels of ERα mRNA targets.

Then they experimented with breast cancer cell lines that had acquired resistance to tamoxifen, both in tissue culture and in mouse xenografts. Inhibiting the ERα RNA-binding activity restored tamoxifen’s potency against the tumors in mice. It also made the cells in culture more sensitive to stress and apoptosis.

A better understanding of ERα's many functions could help optimize current treatments—like tamoxifen—as well as lead to new therapeutic targets. Compounds that target translational control in cancer are already in the clinic and can now be tested for potency against breast cancers that are associated with ERα expression.

Much more work needs to be done, however, to really understand how ERα controls RNA biology in the cytoplasm. And other regulators of RNA could yet be discovered.

“One of the reasons why we haven’t cured cancer is because we still don’t fully understand how it works,” the senior author said. "If we start from the most basic point of view, we might be able to discover new things.”