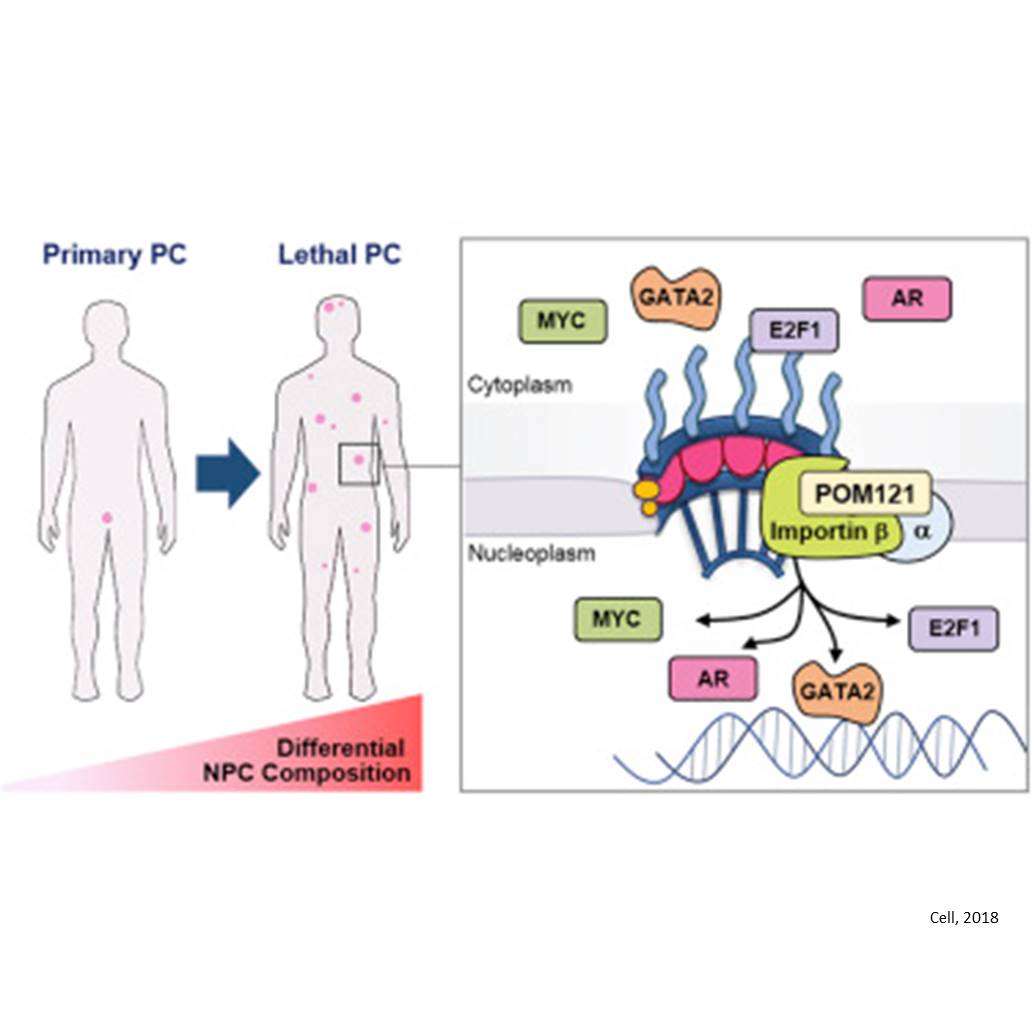 Certain molecular drivers of cancer growth are "undruggable" - it's been nearly impossible to develop chemicals that would block their action and prevent cancer growth. Many of these molecules function by passing cancer-promoting information through a gate in the nucleus, where the instructions are carried out. Researchers have found a way to block the nuclear gates used by these molecules, and show that this inhibition can halt aggressive prostate cancer in mice bearing human tumors.

"We found that a particular gatekeeper, the nuclear pore protein called POM121, traffics molecules that boost tumor aggressiveness," said first and co-corresponding author of the paper published in the journal Cell. "Blocking this gatekeeper prevents several molecules from reaching their targets in the nucleus, thus decreasing tumor growth." The researchers also showed that blocking POM121 transport helps restore chemotherapy efficacy in preclinical models of the disease.

This is the first demonstration that nuclear pore proteins may be effective anti-cancer targets for prostate cancer.

Using computational biology techniques that integrate genetic information from prostate cancer patients and experimental models, the investigators dissected the functions of nuclear pore proteins across the course of the disease from early to late stages. They discovered that an abundance of the POM121 component of the nuclear pore was associated with aggressive tumors that continue to grow despite standard therapy.

The researchers then showed that blocking POM121 or disrupting its partner Importin β could block molecules such as MYC, E2F1, and the androgen receptor - three molecules that drive aggressive prostate cancer - from reaching the nucleus to activate tumor growth and spread.

"This study shows that blocking the import machinery may be an effective strategy to target the undruggable," said co-corresponding author. "For example, MYC is an oncogenic transcription factor wherein successful direct blockage does not exist. We provide a remarkable approach to target not only MYC but also E2F1 by impairing their nuclear import, critical for their oncogenic function in prostate cancer."

Although about 85-90 percent of men diagnosed at early stages of prostate cancer are cured after receiving surgery or radiotherapy, the remaining 10-15 percent of men have an aggressive disease course. This advanced disease is characterized by the appearance of tumors in distant organs (metastasis) and the acquisition of resistance to hormone therapy targeting the androgen receptor and anticancer drugs, which precede death in most prostate cancer patients. "Prostate cancer remains a major health challenge, as the second leading cause of cancer death in this country. This study represent a major breakthrough in identifying a new means for targeting advanced prostate cancers," said a co-author on the study.

The researchers plan to continue the work by identifying specific chemical compounds against POM121 and determine their efficacy and toxicity for use in human clinical trials. Distinct brain pathologies with stress and mother's abuse in infants