Cancer cell growth or death determined by its cohesion 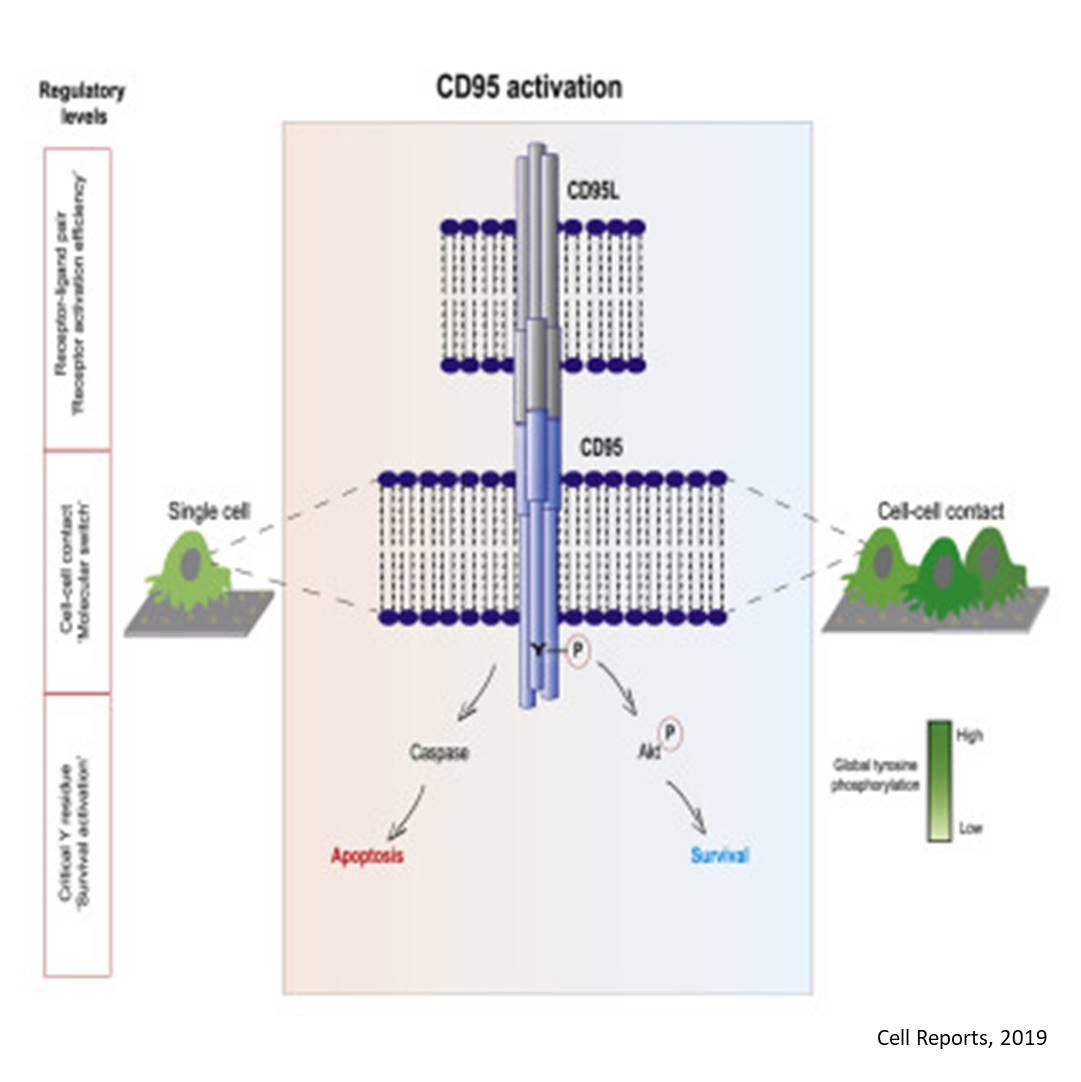 The receptor protein CD95 is exposed on the surface of all cancer cells like small antennae. Activation of the receptor by the CD95 ligand (CD95L) triggers apoptosis in the cancer cell - or the exact opposite: "We studied various types of cancer tissue and found that CD95 activation usually stimulates tumor growth under natural conditions," remarked the senior author.

Researchers are investing considerable effort into examining how medicine could harness the other side of CD95 and cause cancer cells to die in a targeted way. To do so, the team attempted to understand which factors decide whether CD95 activation leads to cell death or cell growth.

The team developed artificial cell membranes into which they could insert any amount of the CD95 ligand. Using this method, they discovered that a particular distance between the individual ligand molecules was necessary to achieve ideal activation of CD95 - and to actually induce cell death in cells isolated from biopsies of pancreatic cancer or glioblastomas grown in a petri dish.

The researchers then assumed that they had found the perfect way to cause tumor cells in the body to die and extended their experiments to brain tumors in mice. They gave the animals latex beads with the ideal surface density of CD95 ligands. However, instead of observing a reduction in the tumor mass, as expected, the opposite occurred: tumor growth was accelerated.

In order to clarify the apparent discrepancy between cell culture and animal experiments, the researchers experimented with tumorspheres, tiny tumors grown in culture. CD95 activation via the artificial cell membrane stimulated growth in these cell spheroids, which behaved like natural tumor tissue.

"The impact of CD95 activation - cell death or growth - appears to depend primarily on whether there are isolated cancer cells, as grown in culture, or cells in three-dimensional structures," another author explained. Individual cells are programmed to die following CD95 activation. In natural conditions, however, namely in a tissue structure, CD95 activation stimulates growth. In the experiments, even contact to a single neighboring cell was enough to protect tumor cells from CD95-induced cell death.

"The result will enable us to develop new strategies to transform the growth-stimulating signals of CD95 into cell death signals for the cancer cells. This could help us stop tumor cells becoming resistant to treatment," study director added.

A clinical phase II study conducted several years ago already showed that, when combined with radiotherapy, blocking the CD95 signal could lead to better survival rates in patients with advanced glioblastomas. "Our current findings provide an explanation for the first time of why blocking CD95 does actually slow down cell death," the author explained.

Death signals or growth stimulators - up to now, scientists did not know why CD95 activation in cancer cells can have such different outcomes. As a result, they were unable to conduct further targeted research into this signaling system - so promising for cancer treatment - to benefit patients.

The different outcomes of the experiments on cancer cells grown in culture and on brain tumors in mice allowed the researchers to find the explanation for the first time. Using tumorspheres, the researchers were subsequently able to confirm the effect of cell contact in an experimental setting and rule out other influencing factors such as the immune system.

This finding will enable the therapeutic potential of blocking CD95 to be harnessed in a much more targeted way.