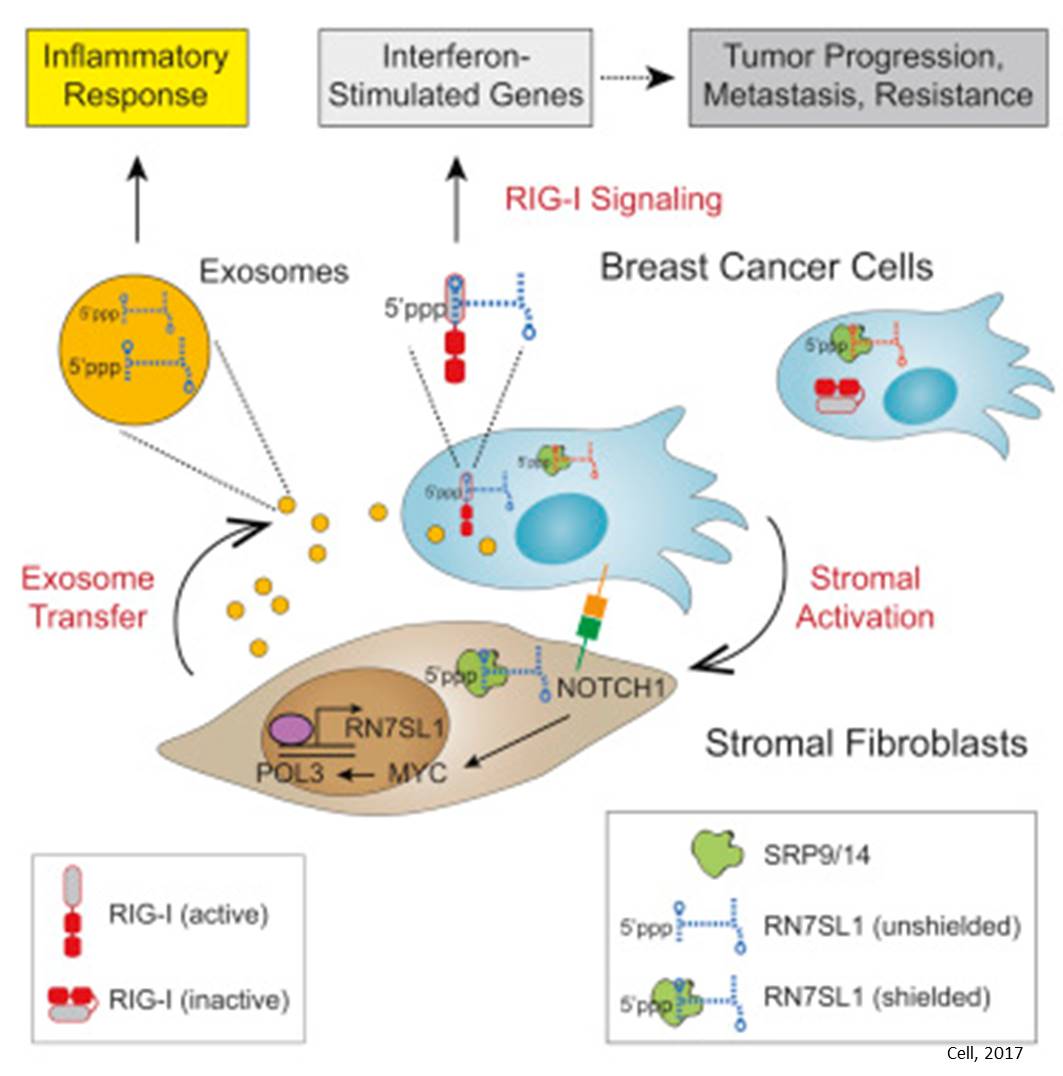 In a study that could explain why some breast cancers are more aggressive than others, researchers say they now understand how cancer cells force normal cells to act like viruses - allowing tumors to grow, resist treatment, and spread. The virus mimic is detected in the blood of cancer patients, particularly in cases of an aggressive type known as triple-negative breast cancer. Researchers say cracking the code of how this process works opens up the possibility of targeting this mechanism for treatment. They published their findings in Cell.

In addition to cancer cells, human tumors also contain normal cells like fibroblasts and various immune cells. Cancer cells corrupt these cells to help tumors grow and spread, and to survive when attacked. The fibroblasts cause these tumors to show high levels of interferon-stimulated genes (ISGs), which are genes that normally fight off viruses. The fact that ISGs show up in tumors suggests something inside the tumors is mimicking a virus.

"The conundrum was that in most cases, there was no viral infection in these tumors," said the study's senior author. "We've been studying this problem for many years, and it's a puzzle we were motivated to solve because cancers with this kind of anti-viral signaling can be particularly aggressive."

It turns out the cancer cells instruct fibroblasts to secrete exosomes - tiny fluid filled sacs that in this case contain special genetic material that makes them look like viruses. Researchers used breast cancer as a model and found that when cancer cells stimulate fibroblasts, the fibroblasts respond by secreting exosomes that are rich in a specific type of RNA known as RN7SL1.

Unlike most RNA in cells, RN7SL1 has a special end that resembles virus RNA. Under the direction of the breast cancer cells, the fibroblasts ensure the exosomes keep that viral-like end exposed, tricking the cells that take up the exosomes into responding as if there is a viral infection.

"The ability of cancer cells to specifically instruct the fibroblasts to expose the viral-like end of RN7SL1 is a key discovery," senior author said. "If the end remains covered, breast cancer cells wouldn't treat these exosomes like a virus, making them less likely to progress and more likely to respond to treatment. On the other hand, if the end is always exposed, cells would react as if they are infected with a virus all the time."

"Since we can test the blood of cancer patients to measure the presence of exposed RN7SL1 in exosomes, we can potentially identify patients whose cancers will be the most aggressive because of this virus mimic," senior author said. "Now that we understand how the exposed RNA is generated, we can look to potential therapeutic targets."

The current study, along with a previous related study from the group, suggests the NOTCH pathway could be one of those potential drug targets. Drugs that block NOTCH can both turn off signals that instruct fibroblasts as well as interfere with the ability of breast cancer to respond to the virus mimic. Therapy that includes NOTCH inhibitors was effective at treating mice with triple-negative breast cancer.