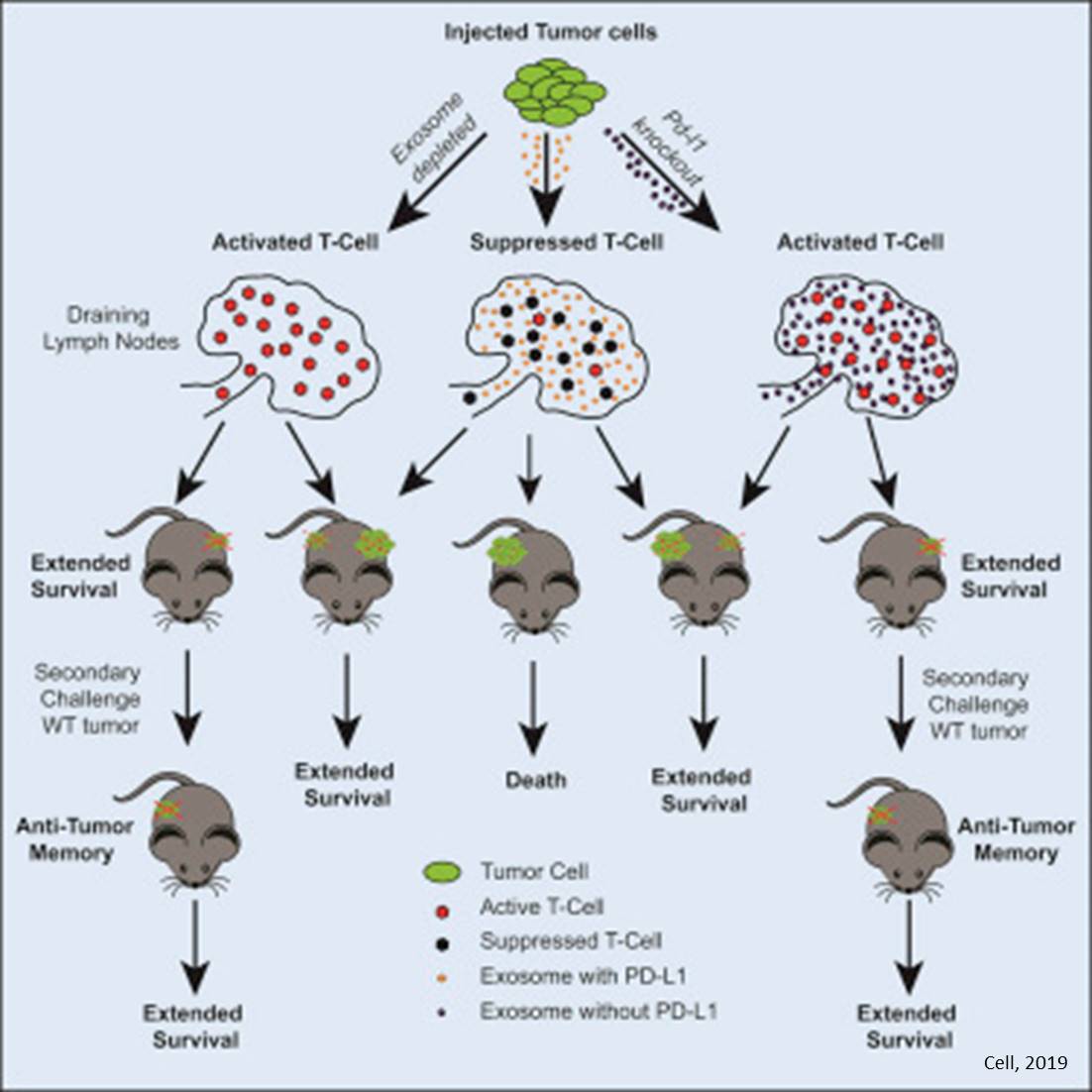 Immunotherapy drugs known as checkpoint inhibitors have revolutionized cancer treatment: many patients with malignancies that until recently would have been considered untreatable are experiencing long-term remissions. But the majority of patients don't respond to these drugs, and they work far better in some cancers than others, for reasons that have befuddled scientists. Now, researchers have identified a surprising phenomenon that may explain why many cancers don't respond to these drugs, and hints at new strategies to unleash the immune system against disease.

"In the best-case scenarios, like melanoma, only 20 to 30 percent of patients respond to immune checkpoint inhibitors, while in other cases, like prostate cancer, there is only a single-digit response rate," said senior author of the new study, published in Cell. "That means a majority of patients are not responding. We wanted to know why."

In malignant tissue, a protein called PD-L1 functions as an "invisibility cloak": by displaying PD-L1 on their surfaces, cancer cells protect themselves from attacks by the immune system. Some of the most successful immunotherapies work by interfering with PD-L1 or with its receptor, PD-1, which resides on immune cells. When the interaction between PD-L1 and PD-1 is blocked, tumors lose their ability to hide from the immune system and become vulnerable to anti-cancer immune attacks.

One reason that some tumors may be resistant to these treatments is that they do not produce PD-L1, meaning that there is nowhere for existing checkpoint inhibitors to act -- that is, they may avoid the immune system using other checkpoint proteins yet to be discovered. Scientists have previously shown the PD-L1 protein to be present at low levels, or completely absent, in tumor cells of prostate cancer patients, potentially explaining their resistance to the therapy.

But in their new paper the group is suggesting a very different answer to this puzzle: PD-L1 is being mass-produced by these tumors, they found, but instead of displaying the protein on their surface, cancer cells export PD-L1 in molecular freighters known as exosomes. These PD-L1-packed exosomes sprout from cancer cells and travel through the lymphatic system or bloodstream to lymph nodes, the sites where immune cells are activated to protect the body. There, the PD-L1 proteins act as itinerant molecular saboteurs, remotely disarming immune cells and preventing them from locating tumors to mount an anti-cancer offensive.

"The standard model says that PD-L1 acts on immune cells that travel to the tumor niche, where they encounter this immune-suppressing protein," the author said. "Our data suggests that this isn't true for many immunotherapy-resistant tumors. These tumors evade the immune system by delivering exosomal PD-L1 to lymph nodes, where they inhibit the activation of immune cells remotely. These findings represent a break from dogma."

The group decided to explore exosomes when they noticed something strange that suggested the standard model of PD-L1 presentation was flawed. Like scientists that came before, they found low levels of PD-L1 protein in resistant cancers. But when they looked at messenger RNA (mRNA), the molecular precursor of all proteins, they observed an odd discrepancy: there was far too much PD-L1 mRNA for the scant amount of PD-L1 protein that they measured in the cells.

"We saw the difference between mRNA and protein levels and wanted to figure what was happening," the senior author said. "Our experiments also showed that the protein was in fact being made at some point, and that it wasn't being degraded. That's when we looked at exosomes and found the missing PD-L1."

To show that exosomal PD-L1 was responsible for imparting immune invisibility, the researchers turned to a mouse prostate cancer model that's resistant to checkpoint inhibitors. When they transplanted these cancer cells into healthy mice, tumors rapidly sprouted. But when the scientists used the gene-editing tool CRISPR to delete two genes required for exosome production, the edited cancer cells were unable to form tumors in genetically identical mice. Though both edited and unedited cells were producing PD-L1, only those unable to create exosomes were visible and vulnerable to the immune system when PD-L1 was blocked.

"The importance of this discovery was immediately evident," said the lead author of the new study. "Currently in the clinic, there are no drugs available that are capable of counteracting the destructive power of exosomal PD-L1, so understanding the biology of exosomal PD-L1 is the first fundamental step that might lead to novel therapeutic approaches for patients."

To figure out how exosomal PD-L1 was interfering with the immune system, the researchers inspected the lymph nodes of mice that received either CRISPR-edited or unadulterated cancer cells. Mice that received the edited cells showed increased immune cell proliferation and had higher numbers of activated immune cells in their lymph nodes, the central command hubs of the immune system.

In a separate mouse model -- a colorectal cancer that's only partially responsive to immunotherapy -- the researchers identified two distinct pools of PD-L1: one on the surface of tumor cells that's sensitive to PD-L1 inhibitors, and another in exosomes that's resistant. When they treated the cancer with a combination therapy that involved both preventing exosome formation and administering PD-L1 inhibitors, the mice survived longer than those treated with either approach alone.

"These data from two very different cancer models suggest a novel therapeutic approach, where suppressing the release of PD-L1 in exosomes, either alone or in combination with current checkpoint inhibitors, could overcome resistance in a large fraction of patients currently resistant to treatment with checkpoint inhibitors alone," the senior author said.

In a surprising result from the new paper, the researchers found that they could use CRISPR-edited, exosome-deficient cancer cells to induce an anti-cancer immune response that targeted tumors that normally resist immune attack.

The researchers first transplanted CRISPR-edited cancer cells unable to produce exosomes into normal mice and waited 90 days. They then transplanted unedited -- and presumably immune-evading -- cancer cells into the same mice. After having exposed the immune system to the CRISPR-edited, exosome-deficient cancer cells, the unedited cells were no longer invisible. Instead of ignoring these cells, the immune system mounted a vigorous response that targeted these formerly immune-evading cancer cells and prevented them from proliferating.

Another surprising result was achieved when both unedited and CRISPR-edited, exosome-deficient cancer cells were simultaneously transplanted into opposite sides of the same mouse. Though they were introduced at the same time, the CRISPR-edited cells proved dominant -- they were able to activate the immune system, which then launched an attack that destroyed the unedited, supposedly immune-resistant tumors growing on the other side.

These results suggest that even the temporary inhibition of the release of PD-L1 in exosomes could lead to long-term, body-wide suppression of tumor growth. Furthermore, they hint at the possibility of a new kind of immunotherapy, one in which a patient's cancer cells can be edited and reintroduced in order to activate the immune system and goad it into attacking immune-resistant cancers. Suppressing the release of PD-L1 in exosomes or the introduction of the "tumor cell vaccine" devised by the team may one day offer hope to patients whose tumors don't respond to today's treatment options.

"Much more needs to be uncovered about PD-L1's function in cancer," the author said. "We are just scratching the surface of what could be a new mechanism that, if blocked, has the potential to suppress many aggressive tumors that don't currently respond to treatment."