Connecting the dots between colitis and colon cancer 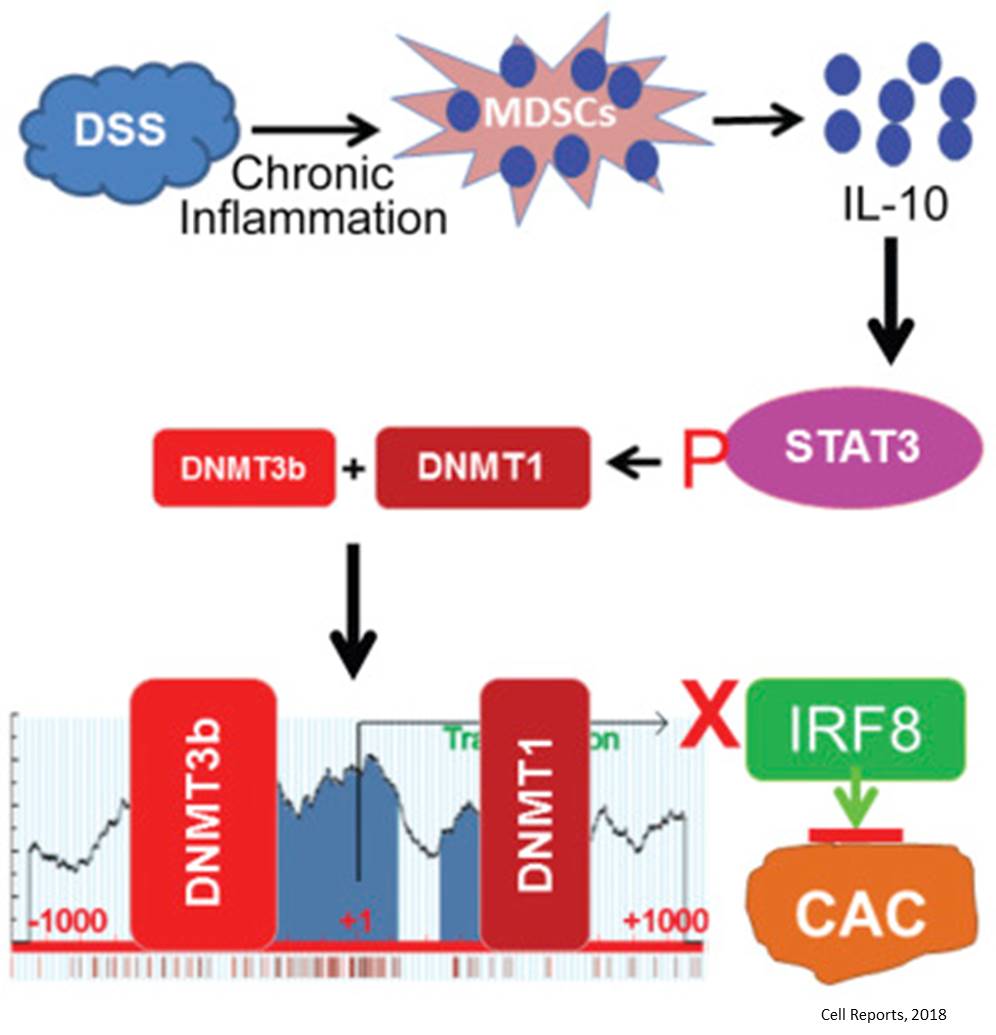 Lingering inflammation in the colon is a known risk factor for colorectal cancer and now scientists report in the journal Cell Reports that one way it resets the stage to enable this common and often deadly cancer.

Inflammation is supposed to be a short-term response to an infection or other irritant in the body that is essential to eliminating it. But when inflammation persists, it can contribute to a myriad of common conditions, from cancer to cardiovascular disease.

The chronic inflammation of ulcerative colitis prompts high levels of myeloid-derived suppressor cells, or MDSCs, to accumulate in the colon. High levels of MDSCs, in turn, produce higher levels of IL-10, a cytokine known to suppress inflammation. But at this high level, the function of IL-10, like the environment in the colon, changes. IL-10 instead activates STAT3, a protein that works as a gene regulator, which in turn increases expression of two genes - DNMT1 and DNMT3b - in the colon. These genes alter the DNA of and ultimately silence a tumor suppressor called interferon regulator factor 8, or IRF8.

Next steps include finding ways to inhibit high expression of IL-10 in the colon."IL-10 has a dual function. It can either be promoting or interfering with an immune response," says the senior author. "What we found here is IL-10 promotes colon cancer."

In a healthy state, IL-10 and IRF8 have no known interaction but both work in different ways to protect against invaders, the senior author.

The scientists set out to look at whether and how the two are connected in a chronically inflamed colon and test the hypothesis that IRF8 functions as a colorectal cancer suppressor.

They created a mouse missing IRF8 in the epithelial cells that line the colon and found plenty of evidence to support their hypothesis. The mice were much more susceptible to chronic inflammation, had less normal cell death in this high-cell turnover area and got more tumors. They also found that in the face of chronic inflammation, IRF8 is silenced, and that in human cancer, IRF8 is downregulated compared to normal colon tissues.

Meanwhile, they showed that in this altered environment, MDSCs and the IL-10 they produce were at higher levels and so were the two genes that ultimately silence IRF8. They found the same shifts in human colon cancer.

The author says it's likely the high levels and timing that transform the role of IL-10 from suppressor of inflammation to suppressor of IRF8.