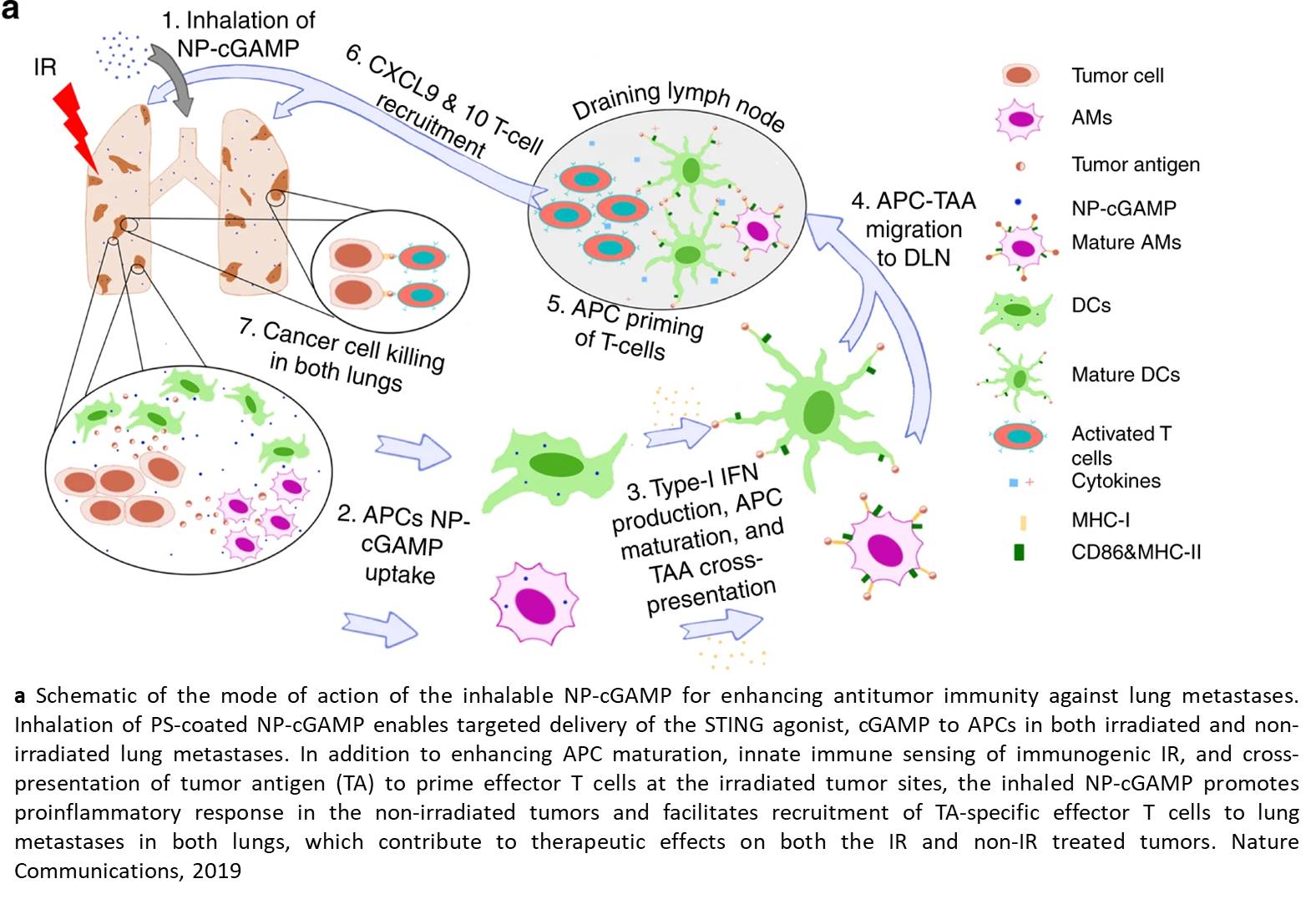 Scientists have reported a new approach to treating lung cancer with inhaled nanoparticles. In this proof of concept study, researchers used a mouse model to determine if metastatic lung tumors responded to an inhalable nanoparticle-immunotherapy system combined with the radiation therapy that is commonly used to treat lung cancer. The study is published in the journal, Nature Communications.

Lung cancer is the second most common cancer and the leading cause of cancer death among both men and women. More people die of lung cancer than of colon, breast and prostate cancers combined. Although immunotherapy is promising, it currently works in less than 20% of patients with lung cancer.

Significant clinical evidence suggests that at the time of diagnosis most patients' tumors are poorly infiltrated by immune cells. This "cold" immune environment in tumors prevents the body's immune system from recognizing and eliminating the tumor cells.

Overcoming this immunosuppressive tumor environment to attack the cancer efficiently is currently an area of great interest in the scientific community, the senior author said.

Previous approaches have involved direct injection of immunomodulators into tumors to boost their immune response. However, this approach is generally limited to surface and easily-accessed tumors, and can become less effective if repeated injections are needed to sustain immune response.

"The goal of our research was to develop a novel means to convert cold tumors to hot, immune-responsive tumors," the senior author said. "We wanted it to be non-invasive without needle injection, able to access multiple lung tumors at a time, and be safe for repeated use. We were hoping that this new approach would boost the body's immune system to more effectively fight lung cancer."

The nanoparticle-immunotherapy system that the team developed delivered immunostimulants via inhalation to a mouse model of metastatic lung cancer. The immunostimulant-loaded nanoparticle which, when deposited in the lung air sacs, were taken up by one specific type of immune cells, called antigen-presenting cells (APC).

The immunostimulant, cGAMP, in the nanoparticle was then released inside the cell, where stimulation of a particular immune pathway (STING) activated the APC cell, which is a critical step to induce systemic immune response.

The team also showed that combining the nanoparticle inhalation with radiation applied to a portion of one lung led to regression of tumors in both lungs and prolonged survival of the mice. In addition, the team reported that it completely eliminated lung tumors in some of the mice.

Through mechanistic studies the team then confirmed that the inhalation system converted those initially cold tumors in both lungs to hot tumors favorable for robust anti-cancer immunity.

The inhalable immunotherapy presents several key advantages to previous methods, especially the ability to access deep-seated lung tumors because the nanoparticulate-carrying aerosol was designed to reach all parts of the lung, and the feasibility of repeated treatment by using a non-irritating aerosol formulation.

The treatment was shown to be well tolerated and safe without causing adverse immune-related distress in the mice.