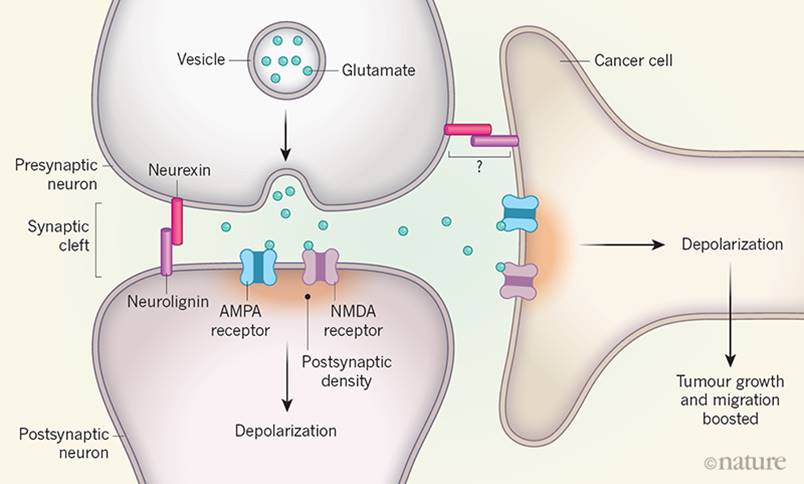 In 2018, breast cancer was the most common cancer in women worldwide, accounting for about a quarter of all reported cancers. One of the biggest problems with any type of cancer is metastasis; and when breast cancer metastasizes, the brain is a common destination.

Publishing in Nature, scientists have discovered that this process involves the "N-methyl-D-aspartate receptor" (NMDAR), which is found on the cell membranes of neurons and is involved in the transmission of nerve impulses. The NMDAR is activated by the amino acid glutamate, released from pre-synaptic neurons during synaptic transmission of such impulses.

The group has shown in the past that glutamate-stimulated NMDAR signaling helps both neuroendocrine and ductal pancreatic tumors grow invasively, and that this co-opted neuronal signaling circuit is generally associated with a poor treatment prognosis in a variety of cancer types. So when the researchers began looking for suspects in breast-to-brain metastases, the NMDAR was at the top of the list.

The investigation paid off: The researchers grew breast-to-brain metastasis cells in the lab to study their relationship to the NMDAR. And, sure enough, the cells were found to co-opt the entire system by which the NMDAR relays its effects to neurons - what biologists refer to as a "signaling pathway".

It seems then that a key to metastasizing to the brain involves turning on the NMDAR. Although some cancer cells secrete sufficient glutamate to auto-activate NMDAR, the current study found that it's not sufficient in breast cancer cells. So, how might they activate the NMDAR receptor?

In a breakthrough discovery, the researchers found that the breast cancer cells form "fake" synapses with the neurons that normally secrete glutamate as a neurotransmitter. The synapse is "pseudo-tripartite" because it resembles the tripartite synapse between two neurons and the surrounding non-neuronal, supporting cells (e.g. astrocytes).

Once the synapses are formed, the neurons supply the breast-cancer cells with ample glutamate, and the NMDAR receptor turns on, providing what the authors call "an insidious rationale for brain metastasis".

"This remarkable mechanism for fueling the growth of metastatic tumors in the brain adds to an expanding knowledge base about the parameters of metastasis that we hope will be applicable to prevention and therapy," says the suthor. "The challenge is the insidious proximity of the cancer cells to normal neuronal synapses, for which NMDAR signaling is crucial. Thus, in future research, we and others will need to search for specific vulnerabilities in glutamate-fueled metastatic breast cancer cells that can be targeted therapeutically to block brain metastasis, while sparing the adjacent normal neurons."