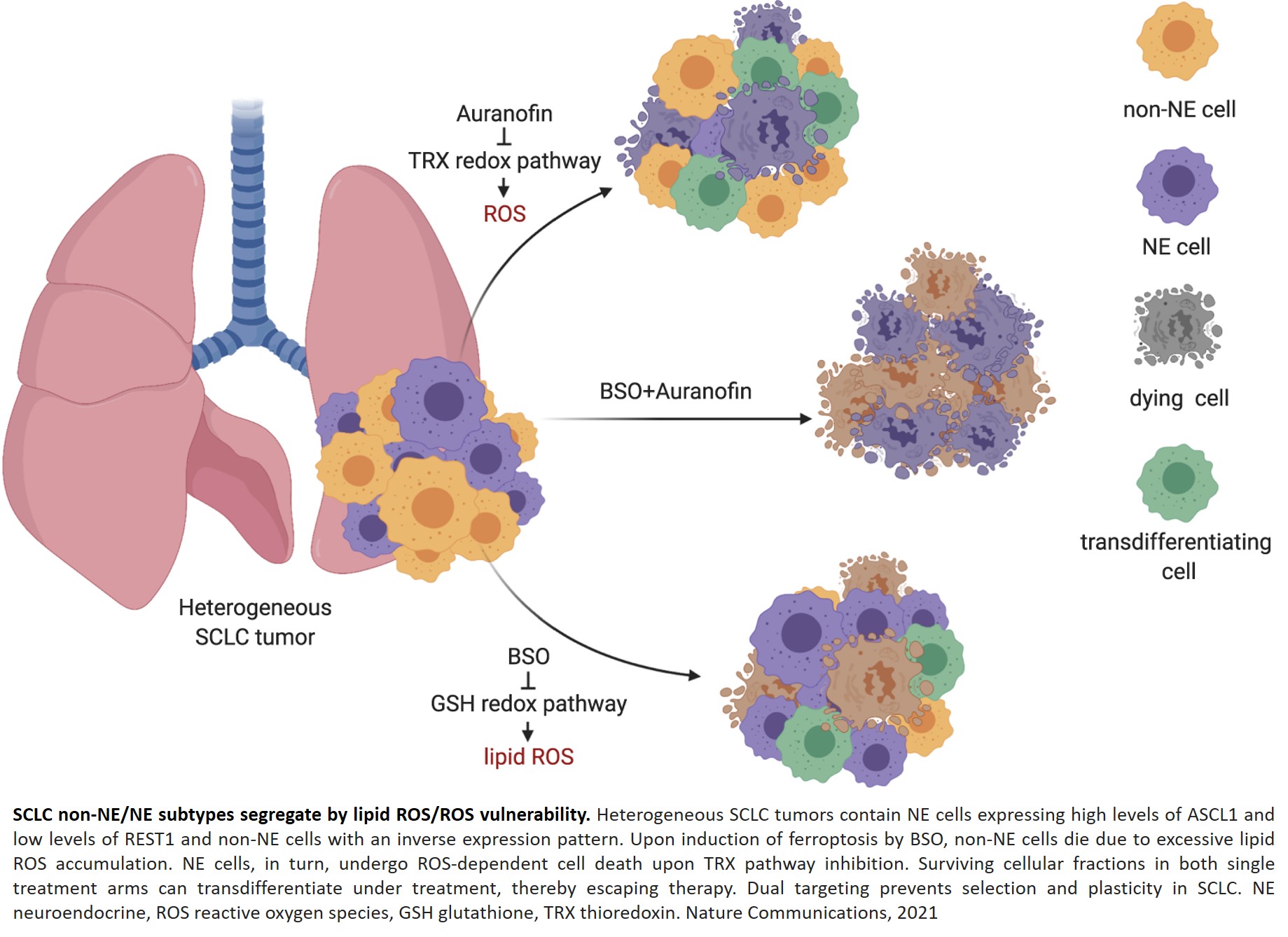 Using samples of small cell lung tumours, a research team has discovered two new ways to induce tumour cell death. One of two subsets of tumour cells can be targeted by activating ferroptosis: iron-dependent cell death caused by oxidative stress. In the second subtype, oxidative stress - and hence cell death - can also be induced in a different way. Both types of cell death must be triggered simultaneously by drugs to kill the majority of the tumour mass. The results of the study have been published in Nature Communications.

Despite many advances in treatment, a diagnosis of small cell lung cancer means a particularly poor prognosis. At the time of diagnosis, cancer has already found many loopholes to escape the body's immune system. 'Traditional' cell death mechanisms, such as regulated cell death by apoptosis, are usually already inactivated at this stage. That way, tumour cells can continue to divide and spread almost unperturbed.

A high cell division rate is characteristic of small cell lung cancer, which initially promises a good response to chemotherapy. 'Unfortunately, in many cases the success of chemotherapy is short-lived because tumour cells rapidly develop resistance to therapy. In addition, a tumour consists not only of one, but of several cell types - the so-called subtypes - each of which uses unique strategies to escape lethal therapy,' said the research group leader. The biologist explores which cell death mechanisms are already inactivated in cancer cells and which ones can still be targeted by therapies to kill the tumour.

The research team used patient samples taken at the time of diagnosis, thus depicting the treatment-naïve tumour. To find out which pathways of cell death are still available, the scientists compared gene activity between patient cells taken inside and outside the tumour. Signalling pathways important for traditional cell death mechanisms were already switched off inside the tumour at this early stage, before therapy. In contrast, genes important for the activation of iron-dependent cell death by oxidative damage (ferroptosis) were strongly activated in the cancer cells.

Regarding a possible application of these findings to the therapy of small cell lung cancer, the biologists made an important observation: When targeting just one of the two pathways - i.e., either activating ferroptosis or inhibiting antioxidant production - in a tumour consisting of cells of both subtypes, cancer cells were able to evade the lethal therapy. They did so by adjusting their gene expression to switch to the subtype that could resist the respective single pathway-targeting treatment. 'When we applied a combination therapy, we took away this route of escape. What is also special about the study is that we used drugs that have already been tested in extensive clinical trials or even approved for the treatment of other diseases,' the senior author explained. Buthionine sulfoximine, which triggers ferroptosis, is already in clinical trials for cancer treatment. The gold salt Auranofin, which blocks the production of protective antioxidants in cancer cells, has been in use for decades to treat rheumatoid arthritis.

Future clinical studies using this combined therapy will clarify to what extent this targeted therapy option will improve the prognosis of small cell lung cancer patients.